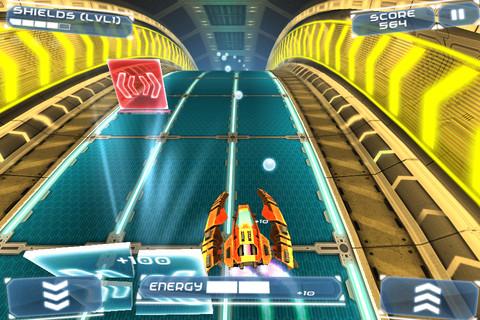 Ion Racer zooms to the front of the pack

Take the high-speed, futuristic racer F-Zero and combine it with the endless run formula of Temple Run, and you’ve got yourself SGN’s new app: Ion Racer. Introducing fast-paced endless run gameplay with rich, colorful graphics, SGN aims to shake up the racing charts. While Ion Racer might be a little too fast for its own good, its exciting presentation is worth a place on your iOS device.

Ion Racer puts you into the driver’s seat of a hovercar, speeding through an endless tunnel of energy barriers and ion orbs. Red barriers bring you closer to crashing, blue barriers increase your score, and cross barriers replenish shields when collected in threes. The tiny orbs function as in-game currency for upgrades and items, as well as a means to replenishing your energy meter. You can exhaust available energy at any time in order to either slow down time (increases your evasion and opportunity to score near-miss points) or boost forward at full speed (smashes through red barriers).

Two control schemes are available for your racing preferences: motion and touch. Surprisingly, both options work fairly well. Tilting your iOS device with the motion controls most accurately emulates the feeling of driving a vehicle, with slow/fast abilities available with the push of a button in the corner of the screen. Touch controls allow for more instant movement horizontally than the motion controls (plus the advantage of being able to keep your device still), but at the cost of a slightly uncomfortable method for using your abilities. We found both schemes to provide similar performances when mastered, and it’s nice to have the options.

Each new run provides a sum of kions (in-game currency) to spend in the shop. Kions can also be obtained via Jetpack Joyride-esque missions, which unlock a large handful at the completion of three specific tasks. Purchasing options include upgrades, perks, and new vehicle models. Upgrades include a permanent increase to your ion magnets, handling, total energy, and shields. Perks, which act as single-use items, include auto repair, score multiplier, more energy per ion, and a head start. Kions don’t accumulate extremely quickly (around 100 kions per two minute run), but in-app purchases offer an affordable stash for those who would rather work with every advantage they can.

From the start of your first race, Ion Racer makes one thing clear: it’s a great-looking game. Vehicle models look sleek in motion, complete with light reflection and blur effects. Unlike competitor Temple Run, nothing appears pixelated or blocky. While it’s a shame the environment never changes outside of new neon colors, the constantly moving tunnel walls help create a true sense of speed.

Whether you’re slowing time Matrix-style in order to dodge, or hitting the boost to break through everything in your path, racing is a thrill. The gameplay may remain simple throughout, but each race remains exciting.

Velocity (and point multipliers) increases at intervals across each run. While this constant boost keeps each run intense, we can’t help but feel that the effect is a bit too strong. By levels five and further, your vehicle zips by at a near-unbearable pace. It’s not uncommon to go hitless up until level five, only to have all of your shields taken out in a matter of seconds from a barrage of red barriers. Even with a fully upgraded vehicle, these speeds (and subsequent missions that require you to reach them) remain hard to handle.

Because of the relatively early difficulty, Ion Storm might struggle tackling similarly frantic games like Temple Run and Jetpack Joyride. Constantly beating your old score is a big reason the runner genre is so addicting, and it’s a shame it wasn’t implemented a little better here. Despite this, the smooth visuals and tight controls make it a must-play, and it’s absolutely perfect for short sessions.