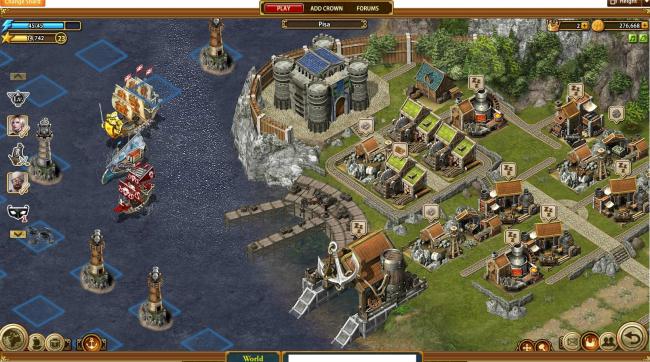 If you’ve ever dreamed about finding fortune and fame on the high seas, you’re out of luck. That ship has sailed – pun intended. What you can do is flash back to the golden age of sailing with Invincible Armada by Neowiz, a Facebook game full of naval combat, exploration and trading with a side order of base building.

Invincible Armada imagines a maritime world where all of the men are androgynously handsome and all of the women are above average in chest size (sorry Garrison Keillor). You select one of a few different beautiful people as your avatar, choose a name and head out to learn the basics of life at sea. You’ll also quickly take on some companions, because it’s hard to captain an entire armada by yourself.

The main gameplay loop involves receiving quests from NPCs that offer a nice mix of occasionally intersecting storylines. Interactions between your companions and the quest-givers are often humorous, sometimes intentionally and sometimes because of the mangled English grammar. In any event, the missions do a good job of both giving you valid reasons to travel to other real-life locations and fleshing out the ever-increasing cast of characters, which is pretty impressive for a Facebook game.

Out at sea, Energy rules. You’ll pay some to drop anchor in friendly ports, some more to set sail again, and still more to move from zone to zone on the ocean maps. Want to take on some of the wandering AI ships to earn some loot? Sorry, you’ll have to expend Energy for that too. It’s the kind of oppressive system that you’d hope we would have outgrown in social games by now.

The ship-to-ship battles have some depth to them, but lack the control that would make them even better. Your ship will automatically fire on any enemy vessel within range, and you can get in close for boarding action too. A variety of special abilities that work on MMO-style cooldown timers can really help you out of tight spots. The problem is that you’re responsible for activating the abilities of your companions’ ships as well, making combat an increasingly big hassle the larger your fleet gets.

One thing Invincible Armada is good at is rewarding both you and your companions with experience points and loot for success in battle, completing missions, and simply exploring more of the oceans. Both you and your crew earn new abilities as you go, and you’ll probably discover that some of your NPCs are better suited for specific ships. 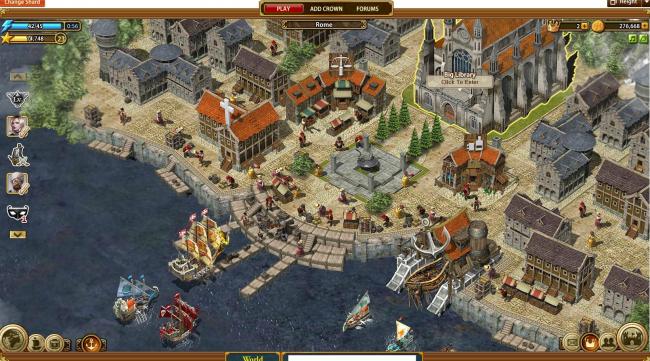 Speaking of ships, you’ll have access to more than a few as you progress through the game. You’ll be able to increase the size of your armada at regular intervals, and you can get your hands on more ships by buying them or crafting them at your base.

Yes, there’s a base building feature as well, complete with structures to build and upgrade, resources to produce and items to craft. You can assign one of your crew members to oversee things, allowing them to level up in the process. Defenses like turrets and mines can be set up in the harbor in order to keep your base safe from attacks from other players. In other games, having a builder element is a welcome addition, but here it mostly serves to pull you out of the best parts of this one.

The PvP elements are more organic, as they come while you’re actually out accomplishing other things. You can challenge other player-controlled fleets to a battle simply by sailing into them on the map (though they do have the option of running away), and human bases appear as small towns along the coastline when you’re out at sea. The other interactive elements are fairly mild: a small chat window sits at the bottom of your screen, and you can name other human players as allies to call upon for aid in battle.

One final element worth noting is the ability to make extra gold by trading goods, taking advantage in the differences in prices from one port city to another. The game does a good job highlighting goods that are selling at the low end of their price ranges so you know exactly what to buy in order to turn a profit. But there doesn’t seem to be a lot of rhyme or reason to what goes up or down, and since simply leaving port and pulling back in can change the prices, it can feel like a cynical Energy drain at times. 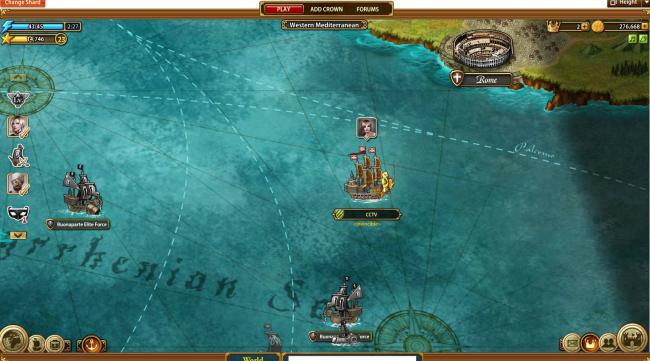 Besides the aforementioned character models (some of which may make the game unsuitable for younger gamers), plenty of other things about Invincible Armada look nice. The graphics and sounds are all pleasant enough for a Facebook game in all phases of the game. There are some times when things hang for a bit when moving from zone to zone, but these appear to be infrequent.

Neowiz deserves a pat on the back for making Invincible Armada with an epic game in mind, something its setting definitely deserves. It’s not quite at that level, but for people looking to dig into all aspects of adventuring at sea, it’s not a half bad way to spend some time.

Yet Another Zombie Defense Review