Invert Review: A Zen Puzzler With Lots of Twists 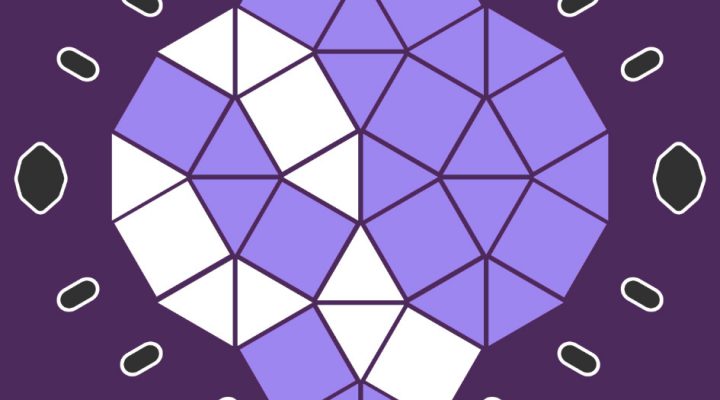 A game that lets you take your time.

Loads of puzzles to get to grips with.

Sometimes gets a bit grindy.

Difficulty of some later levels might be too tough for some.

There’s something inherently pleasing about playing a mobile puzzler. That extra connection that comes from poking and prodding the screen to make things happen just feels right. This is a genre that fits wonderfully into that little gadget you carry everywhere you go.

And it’s not just the tactility of the experience that adds so much. Puzzle games are often the perfect size and shape to fit into the small-burst gaming sessions that mobile play allows for. And Invert gets both of these aspects of the puzzle game absolutely spot on. It’s calming and head-scratching in equal measures, it’s puzzles only last a handful of seconds, but they’re challenging enough that the deeper you get, the more time you’re going to be trying to figure out what you’re supposed to do. 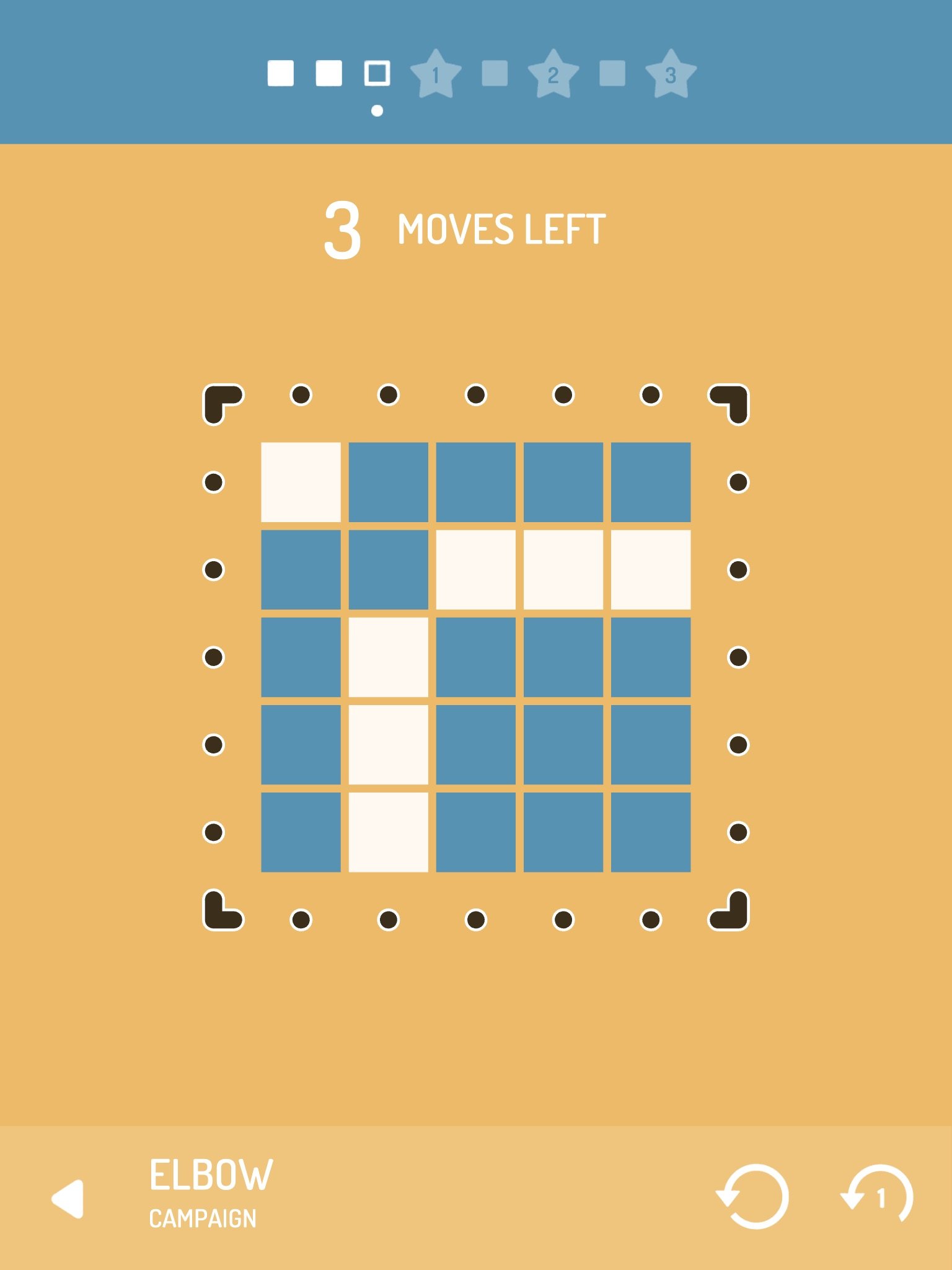 The aim of the game is to turn all of the spaces on a grid the same color. You do this by tapping markers at the edge of the grid. To begin with these will just change a line of blocks from one color to another. But as you get further into the game, you’ll find that some of the markers don’t work in straight lines. They’ll twist groups of blocks around, and you have to figure out what they do before you use them.

You get the chance to experiment though. In the campaign mode you’re given a limited amount of moves, but if you tap on a marker after you’ve used it, your move resets without you having to change the whole board back to its original state. It’s one of the many ways that Invert is generous with your time. It doesn’t throw you back to restart screens or pester you with adverts. It lets you think, it lets you ponder, and it lets you make your moves at your own pace. 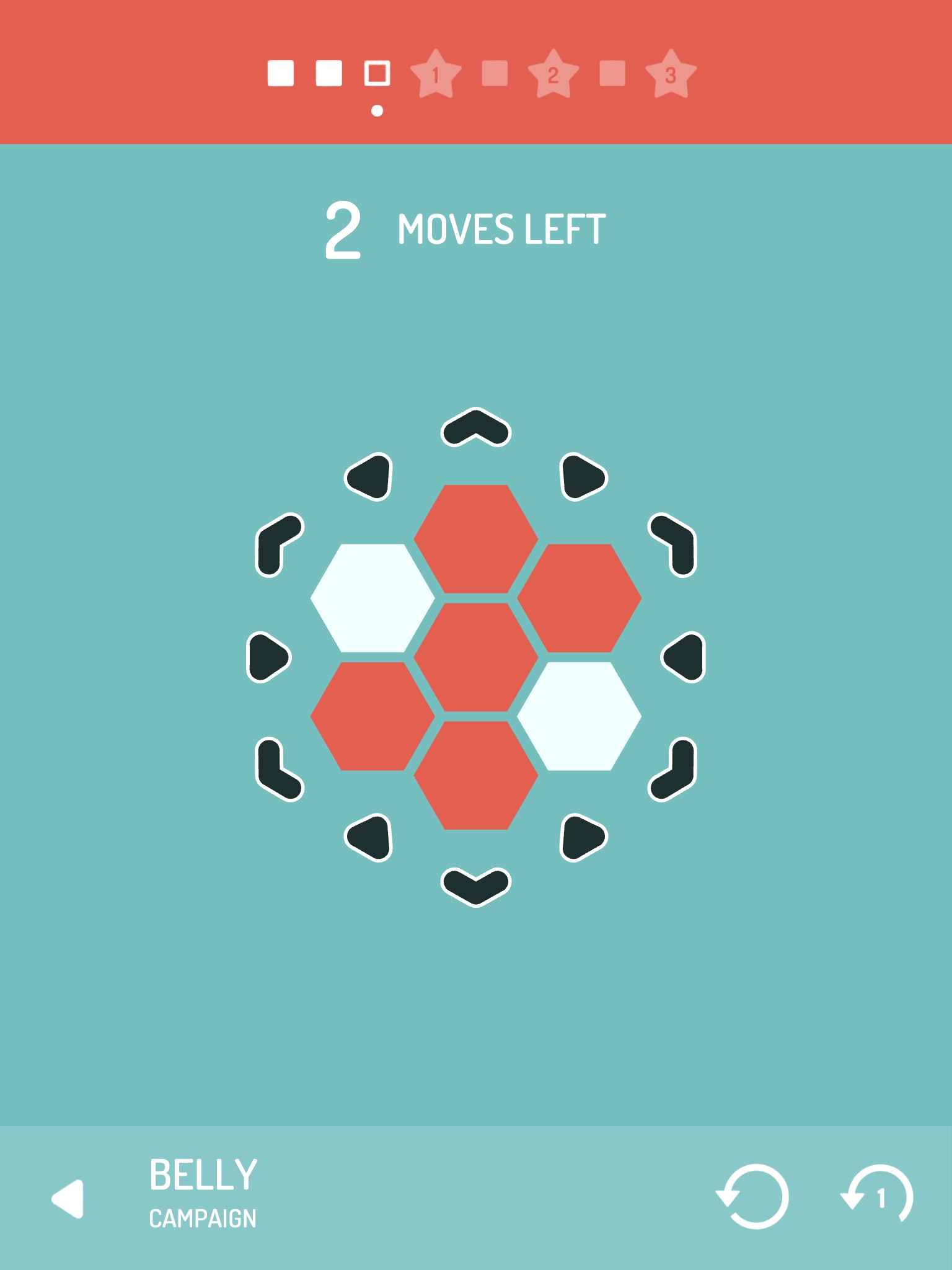 Or at least you do in Campaign mode. There’s also Challenge mode. Here you’re playing against the clock. You’ve got unlimited moves, but every chunk of levels has a time limit. Smash out the solutions quickly enough and you’ll be rewarded with more stars. These stars are used to unlock the game’s expert mode. There are 60 to collect in the Campaign and 60 to collect in Challenge. You’ll need to get 100 if you want to try the game’s trickiest set of puzzles. And when I say tricky, I mean really tricky.

This is a puzzler that gets all of its pieces just about right. There are times you might find yourself frustrated, but that’s usually when your play session comes to an end. Pop back in later and you’ll find that the solution was maybe a little more obvious than you thought. Throw in a neat aesthetic, simple controls, and a progression system that isn’t afraid to let you figure things out for yourself, and you’re left with a game that’s as smart as it is welcoming. And we don’t get to say that much.

It’s true there are a lot of puzzle games on mobile, but if you’re a fan of figuring things out for yourself, Invert is definitely worth checking out.