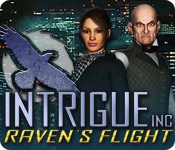 Join super-duper top secret organization Intrigue Inc. as they go on the hunt for an evil mastermind bent on world domination.

Two of the best things about hidden object games are getting to the bottom of the mysterious storylines and enjoying the lush, elaborate art. Intrigue Inc: Raven’s Flight at least gets one of them right. While the game features some fairly pedestrian (translation: ugly) graphics, it also offers an interesting story of evil and international—dare I say—intrigue. It also contains more than a few creative takes on the usual door-opening and item-finding puzzles which save it from being just another ho-hum hidden object game.

Now here’s the setup: you’re an agent working for shadowy organization Intrigue Inc., an agency that protects the world from danger, “both natural and supernatural.” Your boss, Agent M, informs you that one of the organization’s star operatives, a man named La Pree (aka “Raven) has gone rogue, having stolen a fabled artifact called the Golden Elephant. He intends to use it to some nefarious end and it’s up to you to stop him. You’re given a dossier which helps you track him to a nearby harbor and there you and the evil mastermind begin a perplexing and dangerous game of cat and mouse.

The main things Intrigue Inc: Raven’s Flight has going for it are its plotline, its game structure and its unusual puzzles. For the most part, the game follows the hidden object formula pretty faithfully but its narrative skillfully motivates you to knock down every obstacle Raven throws in your way. Having started as Agent M’s nemesis, he quickly becomes yours as you race to stop him from gathering a series of magical crystals that would grant him unspeakable power. Throughout, the game’s hidden object and puzzle sequences are expertly interwoven which keeps your surroundings fresh and the pacing upbeat. Best of all, the game’s puzzles obviously took some thought. Although you’re often doing familiar things like opening locked doors, you’re asked to collect an unusual range of objects and tasked with using them in unusual ways.

What the game doesn’t do so well is create atmosphere and that’s a failing of its rather hard-edged art direction. The glaring light and gaudy, too-sharp, too colorful 3D graphics don’t create a cohesive impression and instead come off like a rainbow-colored, amateurish student project. The herky-jerky animations don’t do anything to improve on this impression and the complete lack of voice acting brings the presentation down a notch or two. That said, the Austin Powers-ish music score does something to salvage things, at least from an audio standpoint.

Despite these things, Intrigue Inc: Raven’s Flight isn’t the worst hidden object game you’ll play this year; it’s also not the best. At about four hours long it offers a good amount of gameplay as well as an inventive take on standard adventure game puzzle design. Further, its storyline is well-crafted and well integrated with the overall game structure and if you can overlook the game’s sometimes scary artwork, you’re in for an decent adventure.