Home / Reviews / Into the Dead Review

Into the Dead Review 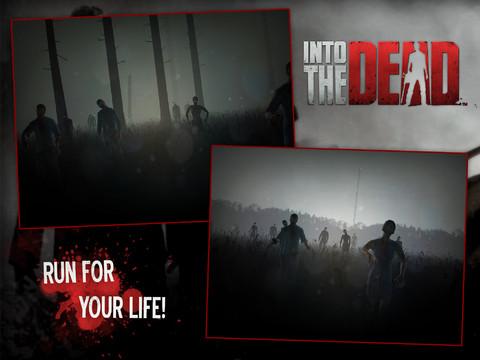 The endless running genre has been one of the more interesting developments of mobile gaming over the past few years. From the humble yet hugely addictive beginnings of Canabalt, all the way through to more recent titles like Jetpack Joyride and Temple Run, there’s something so attention-grabbing about having “just one more go” in an (often vain) attempt to beat your previous best high score.

Into the Dead is the latest in the endless running legacy, and could very well prove to be one of the most iconic of 2012. It’s not just the first-person view that does the magic, or even the zombies for that matter – rather, it’s the attention to detail and careful difficulty balance that really makes this creepy game a winner.

Your helicopter has been downed during a zombie apocalypse, and all you can do now is run like the wind in a bid to escape the undead hordes. Spoiler alert: You’re not going to survive.

Your character runs forwards, and you can choose to move left or right to dodge around zombies, trees, fences and other obstacles. Once you manage to grab a weapon, you can also cut zombies down who are in your way – although you never have many bullets, so it’s usually more of a last resort tactic.

So what’s so special about running forever through hordes of zombies? Well, it’s all about style really. Into the Dead feels cool as hell, as you glance off zombies that get too close, and the camera tumbles all over the place as if you’re actually struggling to stay on your feet.

This, coupled with the gorgeously chilling atmosphere, makes Into the Dead‘s world something that we want to explore further. We genuinely want to keep playing over and over again to see what other secrets the game holds – not simply just to get high scores.

Apart from being hugely stylish, the game’s missions are wonderfully balanced in such a way that it can be difficult to unlock the next batch, but not too difficult that you’ll become frustrated. The perks system too, which gives you advantages based on how many coins you’re willing to fork out each round, adds new dimensions to play that really make you pay tactically.

On the topic of coins and virtual currency, there are of course opportunities to pay real cash to get further advantages in the game. However, in the entire time we were playing, we didn’t need to pay anything at all, and never felt impeded. Good news for all players, then!

Our only real complaint is that, after you’ve played for an hour or so, it doesn’t really feel like there’s much more to see, and everything begins to look the same. We still found that we were having fun, but a little more content at launch would have been great.

With Game Center online scoreboards and achievements that we will no doubt be struggling to top for weeks to come, and more modes promised in the near future, Into the Dead is a bit of a must-have for mobile – especially if zombies hit your spot.