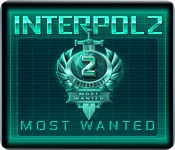 Interpol HW sends an agent on a new seek-and-find mission in Interpol 2: Most Wanted. the previous mission, Interpol: The Trail of Dr. Chaos, involved tracking down Interpol’s version of James Bond’s Dr. No. In the latest mission, you’ll travel the world to find three most wanted criminals hiding among many hidden objects:The Collector, Mr. Nobody, and The Siren.

The graphics and audio (save for occasional footsteps and other creepy sounds) remain as slick and as the original, lending excellent support to the spy / CIA theme. HQ supplies the agent with a PDA for staying in touch, providing analysis, and communicating with field agents.

The boss sends the agent on missions to track down each criminal. The 24 missions occur in Beijing, St. Petersburg, Cairo, India, Barcelona, and U.S. Scenes reflect the countries’ culture and history, but as the boss sends you to previously visited locales, the scenes have little – if any change – to the objects and their placement. The list of needed objects changes a little with some objects appearing in the list repeatedly. Magnifying glasses, butterflies, and canes are popular.

All missions except the earliest ones contain three places for hunting down objects. After finding the minimum number of objects needed, HQ requests the agent to use a magnifying glass to check out a scene to find 10 of the same objects, or compare the differences between two scenes (the same scene every single time).

Every level comes with four hints. No more, no less, no winning extra hints. Agents need to use them wisely with objects blending too well with the background in the end of level puzzle.  Interpol 2 gives agents limited time to find everything they need, but the clock never comes close to running out of time even though agents need to take time clicking between objects.

If agents click one item after the next, the next won’t take. They must wait a couple of seconds before clicking the next found object. This annoys sharp agents who find the next item faster than the game would let them successfully click. It’s bad enough that many objects don’t click on the first or second try.

The hidden items list has an occasional problem. One scene lists “Thoth,” the Egyptian deity with the head of an ibis. The scene showed two of them, but Interpol 2 only accepts one and not the other. Those who like to pump up their vocabularies have opportunities to learn new words in the game. Hidden item lists often contain cultural things that might not be familiar to agents. Smart agents know where to get the information so they can take care of business.

HQ asks agents to look for hearts, yin and yang, peace symbols, and other seemingly unrelated items. At the end, the game explains why agents must seek these non-spy essential items. The story flows nicely. However, some agents might just ignore everything in between as it doesn’t enthrall or affect the missions.

As electrifying as the graphics and theme may be, they alone don’t make a winning formula for a game. The game has a tendency to drone on, with every level feeling like a re-run of an episode. Other than a new story, Interpol 2: Most Wanted doesn’t come with enhancements or new features, so Agent wannabes should consider whether they want to invest in a package that’s basically the same but with new missions. There are plenty of better and more well-rounded hidden object games for agents looking for adventure.