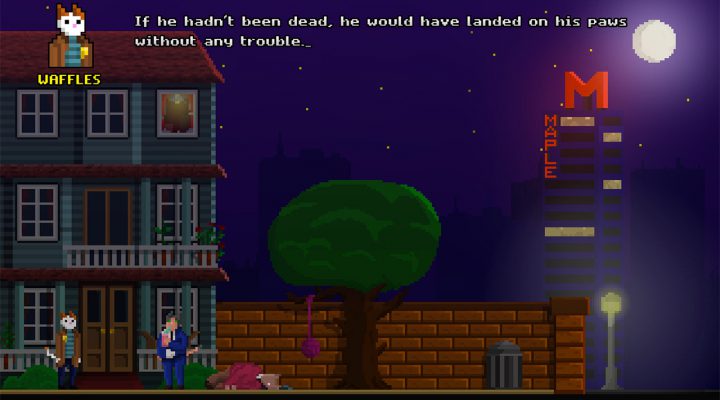 Script is a little limp

Some puzzles can frustrate

Inspector Waffles is very obviously inspired by cult point and click Darkside Detective titles. From the simple yet charming pixel art aesthetic to the buddy cop dynamic of the protagonists it feels very similar to Spooky Doorway’s efforts in the genre.

Sadly the writing isn’t quite as quick witted, and the plotting is a little too haphazard to really make an impact. That said it’s certainly not without its charms.

You play as Inspector Waffles, a somewhat washed up detective who happens to be a cat. A cat who lives in a world of talking dogs and cats, called Cat Town.

In any case you soon get embroiled in a murder case which soon spirals into something much stranger and more complext.

You soon team up with a sniffer dog partner named Spotty, who is the complete opposite of Waffles. They soon learn to put aside their differences and work toget…well you can imagine the rest.

There are a range of environmental puzzles to solve, and many are fairly clever requiring a (fairly) logical combinations of items you find lying around – and only a handful really stumped us.

Even then the game has wisely implemented a hint feature which gives you helpful nudges in the right direction – although you are derided for how you may or may not have used this at the game’s end.

Sadly the script isn’t quite up to the level you’d hope. The set up is cliched, but the world Waffles inhabits actually feels quite fleshed out – it’s just the script is never as funny as we were willing it on to be.

There are jokes, and the characters are usually amusing on paper – a fast food chugging chief, a giraffe who’s inexplicably a member of the FBI – but they never quite hit their targets as squarely as you’d like.

You never feel bored while playing, but neither do you ever really feel like the game builds up a significant head of steam – which is disappointing considering the way the plot is structured towards a big reveal. The ending actually feels a little rushed and is strangely unsatisfying.

Ultimately if you’re after a new point and click adventure on the Switch you could do worse than Inspector Waffles – it’s well presented and has some great moments – but it still falls short of the best the genre has to offer on the system.