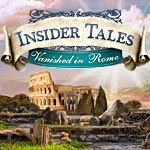 You might think Lady Luck is with Luca and Gia Poverelli of Rome after they win the big jackpot. Alas, they’ve disappeared without ever claiming the money, and Inspector Francesca di Porta is assigned to the case. Insider Tales: Vanished in Rome is a traditional and clichéd hidden object game mixed with mini-games and point-and-click puzzles that far surpasses its all but forgettable predecessor: Insider Tales: The Stolen Venus.

As Inspector di Porta, you explore beautiful hand-drawn scenes of Rome going wherever the clues and puzzle lead you. You never encounter the typical Rome tourist stops, however. Instead you roam around like a resident. You learn about the story in between scenes in the usual vignettes with conversations in bubbles.

As you investigate the scenes, you’ll hunt for hidden objects in different ways. You’ll work with a list, look at outlines, find a bunch of similar objects, compare two scenes for differences, put objects back where they belong and snap photos to match the given black and white photos. Some scenes are scrollable in and out or side to side, but not many.

The hint system uses a rechargeable format. Once you use a hint, you can’t use another until the magnifying glass fills back up. The game has no patience. The magnifying glass lights up every few moments to remind you it’s there to help. It’s as distracting, as is some of the animation in the scenes like birds hopping back and forth.

The mini-games, like the seek-and-find, are similar to the ones you’ve seen before in other games. The instructions are short and simple, appearing at the bottom of every mini-game. In the traffic mini-game, for example, you must move objects until you can free one particular object. With Simon, you copy the music played. Pipes is there, too, as you turn pipes until all of them are connected to restore power. Some mini-games provide a challenge making them worthwhile to play.

Like the previous game, Vanished in Rome has you looking for parts and putting them back together. While the story feels flat, much of what you do relates to the story and its progress. Even though there’s little repetition, you may have to work a scene several times. The first could be to take snapshots while the second time around you have to find the listed items.

At times, the game exasperates. On more than one occasion, you need to find an item of which there are multiples in the scene. For example, you need to find a bird in a scene that contains four birds: two animated and two not. A "wheel" could refer to the ship’s wheel instead of the bicycle’s wheel, while "Film reel" refers to a roll of film.

For more irritation, the game refuses to accept your valid clicks. One item appears loud and clear, yet clicking anywhere on it takes at least 10 times before it takes. You won’t want to replay the game unless you love reruns. Everything is the same. The same objects to find and they’re in the same spot every time.

The game has a weird quirk with the characters and their lip movements. In one case, a character’s lip kept moving for a very short sentence. In another scene involving a conversation between two characters, both of their lips moved at the same time.

Vanished in Rome has so many features used in other hidden object and adventure games that it feels like it’s trying to be everything. It would do better to focus less on the hidden object aspect and more on the other aspects of the game — a problem also found in The Stolen Venus. Considering the heavier focus on hidden object, the game leans on the short side. A shorter game is more forgivable when there are more mini-games and puzzles. Nonetheless, the gorgeous visuals and decent overall production do enough to compel you to see it to the end.