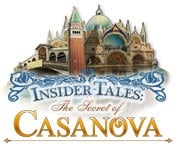 Repetition has become so common in hidden object games that we’ve simply learned to accept it. We head into each new game knowing that we’ll likely be fed a handful of scenes filled with the same objects to find over and over again. This is unfortunate because it need not be so, as proven by Insider Tales: The Secret of Casanova, a HOG that makes a point of ensuring that the player is constantly challenged with new and interesting environments and activities.

Players step into the shoes of Francesca Di Porta, a woman on vacation who is contacted by a professor friend in Italy who has stumbled across a relic once owned by the famous lover and adventurer Casanova. We explore a quartet of European cities mentioned in Casanova’s journal in search of pieces of an ornate heart-shaped amulet.

Things begin simply enough in the professor’s study, where we search for a few random objects. However, once these items are found we don’t simply move on to another scene. Rather, we go on to solve logic puzzles in the same room based on the objects we’ve found, using a key to unlock a journal, a light bulb to fix a lamp, and examining a clock to enter a code on a safe.

The design is such that one activity logically leads to the next. It gives purpose to our actions in each scene we explore, and once we’re finished with a scene we really are finished. No coming back later in the game just to find a few more random objects.

One of the best examples of how the process works is a scene set in an antique observatory. It begins with players doing a bit of cursory exploring, looking for clues as to what Casanova might have been up to in the room long ago. We hunt for items appropriate to the scene, including a map describing a constellation, telescope lenses, and a microscope.

Then Francesca decides she should put the telescope back together again using some of the pieces we’ve found, which initiates a couple of mini-games, including one in which we experiment with different colored lenses to create various light wavelengths. She shines light through the instrument onto a stained glass window, but notes that the window is dirty, so we have to look for something to clean it with. Once clean, it becomes clear that the window is actually a tile-based puzzles and that we need to rotate each piece to create an image.

The game continues on like this from scene to scene, seamlessly blending bouts of hidden object hunting with a series of clever little logic puzzles. Consequently, players never know what they’ll be doing from one minute to the next. It’s a pleasantly refreshing vibe for a game which, at the outset, feels as though it’s going to be a pretty standard HOG experience.

It’s also worth mentioning that it can be extremely challenging. The game’s designers obviously took the job of hiding objects very seriously. Expect to look for items obscured by other objects, shapes that have been shrewdly placed to blend in with the environment (like music symbols on wallpaper with similar marks), and items you might not be able to immediately identify. I almost went nuts looking for an oak leaf-something which, somewhat shamefully, I wouldn’t be able to identify in the real world-in a scene filled with scores of other leaves.

Limitless hints are available, but the hint button takes a couple of minutes to recharge between clicks.

The logic puzzles can be tricky as well, though if they remain unsolved after a couple of minutes players have the option of simply skipping them-an option I exercised twice during the course of the game for puzzles the objectives of which were simply too vague for me to discern.

I didn’t mind having to skip the odd puzzle, but I had a harder time with the game’s brevity. It shouldn’t take most players more than 150 minutes to work through the story, and there are no extras or bonus modes. One would expect a hidden object game without any repetition to be shorter than others that feed players the same puzzles over and over again, but two-and-a-half hours is still mighty short for a $20 game.

So short, in fact, that it makes Insider Tales: The Secret of Casanova difficult to recommend. You could breeze through it in an evening and then find yourself back online looking to spend more money on another game-a pricey prospect.

What’s here is satisfying. Pity the value is lacking.

Delaware St. John: The Town with No Name Review