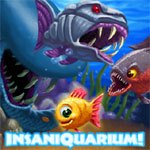 Few natural wonders are as serene and beautiful as the portable undersea world of the average, everyday fishtank. Of course, as those who maintain such setups at home versus just admiring them at the local Chinese restaurant can attest, fewer still are as tough to maintain. Ironically, best-seller Insaniquarium Deluxe manages to successfully capture all the fun and frustration associated with both sides of the coin. And, while we’re at, continues to captivate and enthrall generations of casual gamers with its addictive, hair-pulling charms.

Congratulations – you’ve inherited a bubbling, light-dappled and gently undulating cartoon tank decorated with goofy items like diver helmets, pottery shards, pillars and chunks of coral. Through it swim caricatures of feisty little guppies and other aquatic life. Clicking on the screen causes food to be dropped into the tank, which is then consumed by the critters. The more chow they eat, and the higher its nutritional value, the faster they’ll grow. Most importantly, however: The larger fish become, the higher-value coins (click on each to collect them) they’ll drop, and the quicker the rate at which loot appears. Sounds simple so far, right? Surprise! We’re just getting started.

Your goal on every stage: Earning enough cash to purchase three individual parts of a collectible egg. Once gathered, it’s off to the next level you go. (At least in Adventure mode… Time Trial’s all about bagging as much lucre as possible before the clock runs out, while Challenge demands you fight off increasingly difficult enemies.)

Of course, a few important variables affect one’s chances of success. For starters, fish slowly turn green with hunger – fail to stuff their faces in time, and they’ll die. Meals cost money, and you can only drop so many goodies into the tank at a time. Carnivorous fish must sustain themselves by making impromptu snacks out of their fellows too – not standard grub. And, go figure, fang-faced aliens pop up periodically who you must spastically click on to prevent helpless fish from being preyed upon before obliterating the evil extraterrestrials entirely.

If things seem somewhat frantic, imagine how nutty they get when you’re juggling an entire ecosystem of the little buggers, all the while trying to cash out while hyperactively clicking away. A heady blend of arcade, puzzle and strategy elements, you’d never guess it, but the title shockingly proves a surprisingly robust economic simulation at heart. There’s no secret formula for success, even given help from up to three pets – who hatch from those eggs you’ve been nabbing – such as pearl-generating oysters, chow-spurting seahorses and baddy-baiting swordfish on every level.

Blame cash-collecting elements, which raise fundamental questions at every turn. Do you buy boatloads of smaller fish and attempt to raise them into volume currency producers? Put your bets on fewer guppies and a larger number of hungrier, diamond-generating breeds, knowing they’ll be easier targets for invaders and need to feed on other resources to sustain themselves? Or, for that matter, use a top-mounted menu bar to invest in better food, the option to drop additional pellets or a more powerful foe-vanquishing laser gun?

Quality or quantity, might or mental acuity, don’t think too hard about your approach. Simply letting oneself go is crucial to enjoying such a brilliantly-balanced and sweat-inducing diversion… Especially considering there’s even more to the outing including bonus rounds that see you frantically parsing about the screen to collect falling shells. And, for that matter, entire virtual aquariums that double as screensavers where you’ll want to spend them on new stuff and attend to virtual pals’ needs daily.

That so much content has been packed into the title will delight and amaze. Even more so, considering how much personality characters sport (snails hide in their shells when adversaries approach, momma fish make a sound like they’re breaking wind when giving birth) and the quality of the outing’s seemingly hand-drawn graphics. From catchy sound effects of fish munching away to a bouncy tropical soundtrack, it’s one whopper of a polished package.

Natural enthusiasm aside, we don’t dole out such high praise lightly around these parts. Meaning there’s no mincing words… This one’s a true classic in every sense of the term, and worth diving into post-haste.