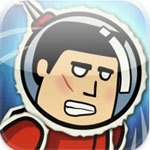 Combining a notebook-art vibe with a spacey theme, Inkvaders attempts to set a new standard for simple shooters on the iPhone. It's fast, it's fun, and it's hard to put down. But no matter how much fun it might be at the moment, there's no avoiding one simple fact: Inkvaders is an unfinished product.

Like most games in the genre, Inkvaders offers a fairly simple approach to crazy shooter action. Your control your space-faring hero with only four commands; left, right, fly, and shoot. And shoot you will! A variety of green-faced aliens will keep coming at you from both sides of the screen, so you'll need to spin quickly to take out the off-world menace before they get you first.

At your disposal will be three weapon types — ray gun, bullet gun, and bazooka. As you kill aliens you'll earn money, and this money will be spent at vending machines to upgrade your weapons, buy ammo, and fill up your health. It's a simple formula all around, but it's addictive and it works. You'll find yourself desperate to earn enough cash to buy your next ray gun or to get your health topped up. While the setting is vastly different, the “I need to buy just one more thing!” feeling of games like Farmville is very much a part of the appeal.

The setting isn't the only thing that's vastly different from family friendly titles like that. There's a certain element of cartoony gore in Inkvaders that will definitely be a turn off for some. Aliens sort of explode when shot, leaving a bloody mess of dismembered body parts in their wake. It's not nearly as gruesome as that statement sounds, but it's certainly going to be a deal breaker for those looking for a cutesy game that sticks with cutesy.

Asides from that though, there's definitely a cutesy vibe to be found here. Everything is drawn on notebook paper, with the characters crudely cut out from other pieces of paper and placed on the playfield by a real human hand. It's a very unique style that's quite endearing once you get into things.

The gameplay doesn't change much throughout the game. Scenery changes a few times and different types of aliens pose different challenges, but for the most part what you see in the first minute in what you'll see in the sixty-first. Each level is usually broken up by a rush mode that will fill the screen with alien scum, but in these instances they're far easier to kill so it's really little more than a test of how quickly you can turn left and right.

So many of the problems we found with Inkvaders — having to start at the beginning every time you play, not being able to shoot while flying — are all being addressed in future updates. The game has barely been available for a week and there are already announcements for version 1.1, 1.2 and 1.3 on the App Store profile. Many of the additions that are coming are going to make this a substantially better product, but it begs the question; if all of these features were planned and in the works before the game was released, why didn't they just wait until they could release a more complete product?

Adding in new features or patching bugs with version updates is a hallmark of this generation in gaming. Many great iPhone games, from FieldRunners to Toki Tori, have used this feature to add in new levels and address player concerns long after the original product has shipped. While this is certainly something to be cherished, there's a darker side to updates and Inkvaders is a prime example of this.

Inkvaders is terrific fun, and it's nice to know that the problems we've found have solutions in the work. The addition of things like boss fights and new weapons will really help to round out the experience, but it's just a shame the game didn't launch with them. Even as a rushed product Inkvaders is still better than the majority of games it's competing against. For 99 cents you can't go wrong, especially with the promise of so much more content on the way.