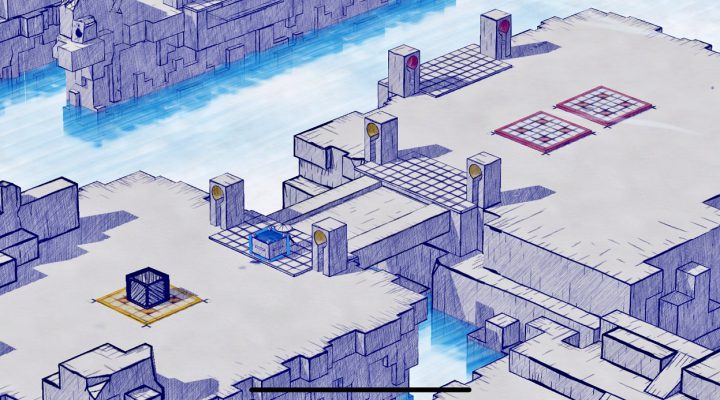 Just the right balance of challenge and story

Can sometimes be a bit fiddly

Could do with a movable camera

Inked (download from the App Store) is a gorgeous-looking puzzle game set in a world that looks like it’s been drawn in ballpoint pen. It’s got some sticky moments, but for the most part you’re going to love what this one has to offer.

The game sees you playing as a samurai who has laid down his sword. Instead of slicing things up you need to manipulate the world around you, pulling switches, pushing blocks, that sort of thing. But there’s a pretty intriguing twist – some objects you can redraw in different positions.

This is because of the artist – represented by a pair of fleshy hands that appear at either side of the screen from time to time. We’re talking worlds within worlds now, the samurai making his way through the artist’s creation.

And it’s an interesting creation. For the most part you’re trying to build a path to follow. Sometimes you’re using ramps and other items to guide balls into holes to push switches to open bridges. Then there are pressure plates, levers and much more, and figuring out how to get to them is all part of the fun.

The puzzles start off quite simply, pushing things from A to B so you can get to C and so forth. But after a while they take a turn for the complex. There are some real head-scratchers and others that require a precision that the touch controls and camera angles can’t quite deliver.

Inked is at its worst when things get fiddly, when you’re left poking at the screen to move things about without the benefit of a movable camera. Trial and error is never a good look for a puzzle game and a couple of times you’re going to find yourself sinking to that level in Inked.

Get past those parts though and you’ll discover a warm, wonderfully well put together puzzle game that delivers hours of entertainment. It’s not perfect, but there’s enough goodness here that you’re going to forget the bad parts pretty quickly.

Click here to read more reviews of the latest games for iOS, Android and Switch