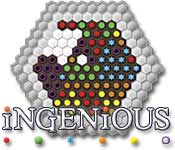 Challenging, fun, head-scratching, infectious, irresistible, addictive… As acclaimed as ultra-prolific German board game designer and PhD in mathematics-possessing wunderkind Reiner Knizia’s various works – like Amun-Re and Taj Mahal – are, casual user-friendly isn’t a term you’d use to describe most. Happily though, as Ingenious – the latest virtual conversion inspired by said braniac’s over 200 title-strong personal catalogue of creations – proves, one should never judge a book, or desktop diversion, by its cover.

Be thankful for that too: The game’s about as visually Spartan as any shareware title circa 1994. Though certainly not aesthetically unpleasing by any sense – after all, the graphics simply mimic a tabletop set complete with cardboard counters – it’s hardly what you’d expect in this age of snazzy 3D-accelerated special effects. Nor will the soundtrack (a set of willowy, inoffensive synthesized tunes seemingly ripped straight out of a late-’80s point-and-click adventure) set the PC world aflame. But happily, we come to praise the title, not bury it: And darned if the outing’s sheer simplicity and excellently catchy base play mechanic don’t make doing just that a veritable cakewalk.

For starters, let’s begin with the mega-simple setup. Faced with a honeycomb-like board, one merely attempts to earn points by matching colored shapes on the grid through laying down double-sided hexagonal chips. (One side, for instance, may contain a green sphere or blue star; the other, a purple circle or yellow starburst.) Left-clicking with your mouse lets you place the chips, right-clicking rotate them.

So how is your score – which can be tracked by each individual color via a chart located on the corner of the screen – calculated exactly? Easy: By creating straight lines of similarly-colored objects, with each adjacent matching icon in one of five potential directions being worth a single point. (Although the shapes on the chip you’ve just laid down never add to this total – only those already on the board.)

Sounds pretty straightforward and effortless to approach, right? It is – except that mastering the game’s particulars is where the real fun lies, with chips replenished each round, only 120 total chips available and final player ranking determined by the value associated with your lowest color score well.

Despite the relatively simple on-screen action, there’s a lot of brainstorming going on behind the scenes. That goes double when you factor in additional rules such as extra turns for reaching certain point thresholds, instant-win conditions and options for periodically replacing your chips. Of course, the excitement’s mostly of a cerebral nature, meaning that if you’re not the chess-playing sort at heart, it’ll hardly captivate, or get your pulse racing.

In other words, enjoyment levels will be highly subjective. How much value you’ll get from Ingenious ultimately depends on how often you realistically see yourself coming back, the same as you would with, say, a time-honored gray matter-flexing amusement like Go or Othello. Fun and interesting, there’s plenty here to keep you hooked – just not in the way of flashy special effects or nail-biting excitement.

Bottom line: The underlying premise works well, play variations are nigh endless and you could spend eons here devising and testing out new strategies. If only the surrounding presentation had been tweaked to add a little more mainstream appeal and/or incentive for continued play through the inclusion of hidden content or even a goal-based career mode, though, Ingenious might’ve been that much more intriguing