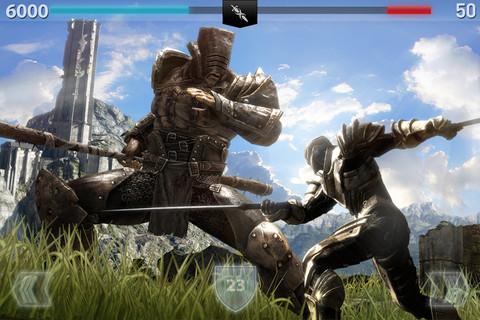 Infinity Blade II is an excellent sequel, but it lacks the game changing impact of its predecessor

Like the rest of the gaming world, Infinity Blade knocked our collective socks off when it came out in December 2010. One year, a few updates, and a novella later, Chair Entertainment has unleashed the first full on sequel to the App Store. But is Infinity Blade II really the follow up we were all hoping it could be?

After only a few minutes with Infinity Blade II, it quickly becomes apparent that this is a sequel that’s more evolution than revolution, and honestly, it doesn’t evolve much. That’s not to say Infinity Blade II isn’t a terrific game – if anything, the reason you’re not reading this review sooner is because I simply couldn’t put the game down long enough to write about it – but if you’ve already played Infinity Blade, there aren’t plenty of new ideas here to crow about.

The basics here will feel familiar to veterans of the series – or simply anyone who’s played an Infinity Blade clone over the last year, like Blood & Glory or Dark Meadow. Players will dodge, block, and parry attacks from a monstrous titan, and after a few defensive maneuevers, they’ll be given the opportunity to attack in a flurry of finger swipes.

The peripheral elements, too, will feel strikingly familiar. When you die, you’ll still start back at the entrance while retaining all of your equipment and enhancements. As you progress, you’ll still earn gold that you’ll be constantly spending on new weapons and equipment. And as you earn experience, it will still be dependent on whether or not you’ve “mastered” your current equipment. It’s everything we loved about Infinity Blade, but the core of the game doesn’t really break any new ground.

Scratch beyond that core though, and you’ll see some simple changes that, thankfully, all manage to enhance the experience rather than detract from it. There’s a fair bit more story this time around, and as a result the area you’ll explore is a bit larger. In fact you’ll need to adventure to different areas in the same complex to complete different goals – a welcome change from the “try to kill the God King, fail, repeat” formula of the first.

Weapons too, have undergone a bit of an upgrade. This time around there are three weapons categories to pick from – light, heavy, and dual – and each comes with its own advantages, weaknesses, and gameplay tweaks. For example, heavy weapons tend to deal the most damage, but their extra weight makes it impossible for a player to dodge. Instead, you’ll be given additional blocking options on the left and right.

And weapons and equipment can now be enhanced through the addition of special gems. Gems can be found throughout the game in treasure chests, on fallen titans and in the store, and each have their own particular shape. You’ll need to have a gem slot with a matching shape on your armor or weapon if you want to equip one – and believe me, you’ll want to. These gems can provide modifiers on everything from attack strength to magic damage to gold finds.

All of these little touches make Infinity Blade II a better product than its predecessor, but at the same time, there are a few missing pieces that simply can’t be ignored. Over the last year, Infinity Blade has seen a number of updates that have introduced things like the multiplayer “Arena Mode,” and the alternate single player “Survival Mode” – but none of that is here in Infinity Blade II. 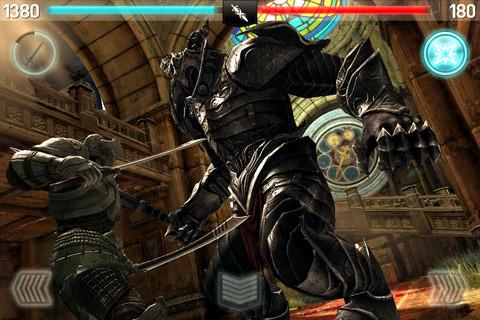 There are also some technical problems that can’t go unmentioned. Yes, at this time the game isn’t working correctly on the first gen iPad and the fourth gen iPod Touch – but that’s not what I’m talking about. Chair is promising a quick remedy to those issues, so it’s hard to ding them for that. No, the technical problems I’m talking about seem to have more to do with the forward momentum of technology. Infinity Blade II is advertised as being “optimized for iPhone 4S and iPad 2,” but what it should really say is “runs somewhat poorly on iPhone 4.”

I’d like to emphasize the “somewhat” in that statement, because for the most part Infinity Blade II runs like a dream. But at the same time, it’s impossible not to notice the drops and stutters in frame rate during particularly frenzied combat, or even during some of the basic monster introduction cinematics.

For everything Infinity Blade II has added to the formula, Chair seems to have been just as quick to take something away. It’s a sizable adventure to be sure, and there’s no doubt it’s an absolute must play – but at the same time, it feels like they’re holding back content simply so they’ll have something to offer as an update down the road. And when that “something” could be content that was in your last game… well… that just feels like cheating.