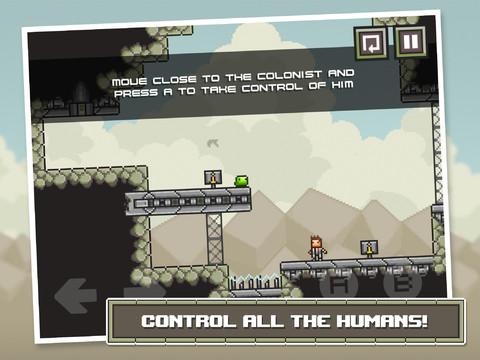 You won’t encounter much resistance when you take over the world with Infestor, but you’ll still have fun.

War is a horrifying and bitter experience even in its most base form—that is, two walls of armed human beings throwing themselves at one another. But war is really hair-raising when it becomes subtle, shadowy, and sneaky. Infestor is a compelling, if straightforward, platforming/puzzle game that demonstrates how the loud work of an army can be done with a single, silent germ.

Infestor takes place on a world that sees frequent warfare between two countries. During a period of shaky peace, one country develops a biological weapon and unleashes it upon the other country. That weapon is you—the “Infestor.”

The Infestor looks like a cute little booger, but he’s actually a malicious and driven life form. Your role is to help the Infestor spread havoc through the enemy’s territory by invading and manipulating the people hanging out in each level.

Once you take over a human’s body, you gain a certain skill. Colonists jump high. Laborers push boxes that can help you cross deadly terrain. Soldiers are equipped with guns, overseers can open doors, and jet scouts are able to double-jump. Utilizing each citizen’s special abilities is necessary to reach the end of each stage safely.

You can also use the Infestor’s hosts to give the little guy a boost when he jumps. Simply leave the host’s body when you’re mid-jump to get some extra “oomph.” This process invariably kills the human vessel, but it’s nothing you haven’t done before. Know how you jump off Yoshi’s back to get some extra lift in a Super Mario game? This is the exact same principle. You cad.

Infestor is based around a cool idea, and its charming pixel-based graphics and chiptunes compel you to keep going even if the challenge won’t. Therein lies the game’s biggest problem: It’s pretty easy to blow through. Each level is technically supposed to be a puzzle, but most of the solutions are too obvious to ever make you stop and think for more than a few seconds. Infestor is a very straightforward experience overall; with few exceptions, each level has one solution that’s supposed to be executed in a specific manner. Also, all your hosts just kind of hang out and wait to be infected. The only real dangers come from level turrets, spike traps, and soldiers (they’re a little gun-happy). Droids occasionally show up to jam up your progress, but they’re easily dodged for the most part.

Still, even if Infestor‘s puzzles are a bit weak, its platforming mechanics are polished and responsive. The game controls well, and even though your finger might slip when things get busy on-screen, poor controls are rarely to blame for your failures.

Infestor is built on a good, solid foundation. Hopefully we’ll see future updates that add new levels, more puzzle variety, and maybe some additional challenges and/or surprises. Don’t be afraid to give it a whirl right now, though. Infestor is one pile of biohazardous lime Jell-O who’s worth knowing.