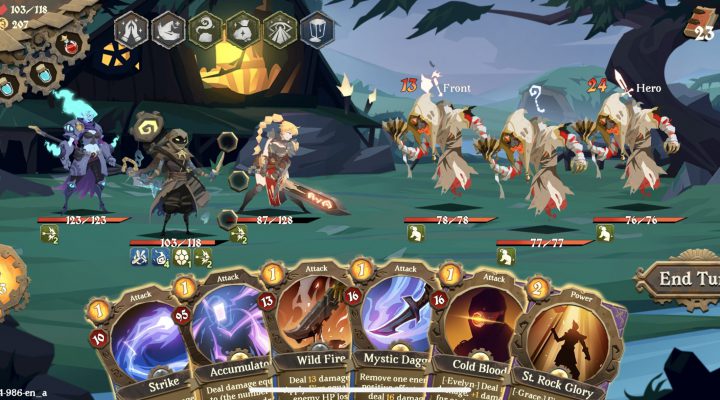 A nice introduction to the genre

Adds its own twists to things

Doesn't quite spark into life

Indies’ Lies is what you might call a Spire-like. It takes the shape of Slay the Spire, then adds a few new twists to the formula. Some of these work, some of them don’t, but the end result is an engaging card-based dungeon crawler that’s easy to get addicted to.

The game sees you traversing a dungeon, picking your route along a path littered with fights, events, shops, shrines and bosses. When you get in a scrap you use your deck of cards to attack and defend. Take down the enemies and you can move onto the next room.

Cards cost energy to play, so you need to balance out attack and defense, check what your opponent is going to do on their turn and make sure you’re not leaving yourself vulnerable. It’s a neat system and anyone who’s played Slay the Spire is going to be instantly familiar with it.

There are some changes though. You can use combos of cards to power-up your hero, and as you play you’ll add new characters to your team. They add supplementary cards to your deck and more energy to your power bank, and you need to think about the best way to position them as well.

In some ways Indies’ Lies is simpler than its inspiration, and in others it’s more complex. You can attach runes to specific cards to add extra powers to them for one thing, and the addition of extra team members puts a new layer of strategy into play.

On the other hand, the battles here feel a little less compelling, the enemies a little less interesting, and the world a little more generic. You can mostly get past that, though, thanks to the compulsive nature of the gameplay. You’ll want to add to your deck, push on to the next challenge and take down the next boss.

Indies’ Lies isn’t as good as Slay the Spire, but it offers enough to anyone who enjoyed the mechanics of its inspiration to be worth a punt. This is a game that will keep you entertained for long stretches of time, even if it is lacking a little when it comes to imagination.