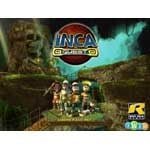 Among the most popular conventions in puzzle gaming is something that I like to call “match three and smile.” This applies to any game that has the player matching three or more like things to make them disappear. Of course, if you’re blessed with actual triplets there’s no option to have them stop crying, let alone disappear.

One of the latest games to incorporate this gameplay mechanic is Inca Quest from iWin. The game follows the adventures of Professor Quest (no relation to Johnny) as he tries to find his lost daughter among an ancient Incan civilization. After crashing his plane, the Professor must make his way through a series of ten temples to gain both the return of his daughter and his freedom.

The mechanics of the game are very simple. The top of the screen is littered with multi-colored discs. You must aim your cannon, located at the bottom of the screen, and fire colored discs to make matches of three or more liked-colored discs, making them disappear. As you play, a small meter beneath your cannon will slowly fill up. When it does, the discs will all move down one space. If any discs make it to the bottom, it’s curtains for the professor and his daughter. Don’t despair too quickly; you have four chances to try and clear each level.

To even the odds, Inca Quest allows you to see the next four colored discs that will be available and to swap the order of the first two. There are also five main power-ups in Inca Quest. The four good power-up discs are the light beam, which shows you the path your disc will travel (and is especially useful when you want to bounce your discs off the walls); the fire bomb, which destroys the discs it touches; ice, which temporarily freezes the discs’ march toward the bottom of the screen, and dynamite, which destroys a large number of discs in the area in which it detonates. These power-ups can really help you out of a tight situation. On the bad side, the cursed disc will slowly infect all discs that it touches turning them black. The only way to get rid of black discs is to blast them with a destructive power-up or get rid of the discs above them.

During the game, if you take out enough discs at once, quite often the discs will zoom back to the top of the screen and take out more discs, creating a combo. The Incan chieftain will begin playing on his drums, and musical notes will float over and land on certain discs. If you can match these discs, you will receive gold. That gold, in turn, can be used at the end of each temple to buy power-ups to be used during the following levels. While I do not completely understand what constitutes a combo, when they do happen it is an exciting experience. Luckily, you can also acquire gold by shooting the falling treasure at the end of each temple, so never fear if you cannot pull off enough combos. The power ups are useful tools, and picking the right ones becomes as much a part of the strategy as clearing all the discs. This “shopping” element has become an important – and fun – twist that’s appearing more and more often lately (see Gem Shop and Cake Mania as good examples).

There are two additional modes of play, for those who have already completed the adventure game. The puzzle mode consists of 80 different puzzles. Discs are arranged at the top of the screen, and you are given a limited number of discs to take them out. Once you complete each group of ten puzzles, a new group is unlocked. One nice thing about this is that you can play the current puzzles in any order, letting you decide when to take on the more difficult ones.

The second additional mode is survival. The evil shaman challenges you to make it through all eight levels of the survival temple. If you can survive each onslaught of discs for the set amount of time, you will advance to the next level. Beware, though: the shaman isn’t above a little underhandedness to keep you from completing the challenge. Both of these additional modes do a lot to extend the replay value of Inca Quest, especially since the levels of the Survival temple change with every play.

The story of the game is told through humorous and well-drawn comic panels. The professor’s bumbling makes it clear that he’s not a suave Indiana Jones, but his heart is in the right place. The story is a major part of the game, and not an afterthought. The comic panels also show off the game’s excellent graphics. Throughout the game, the graphics are well drawn, colorful, and smooth. Not once do they seem clunky or out-of-place. The explosions during combos are exciting, and the falling treasure after each temple is just cool.

The sound is also very well done. The professor gives comments occasionally as you play through each level. The background music is a nice mix of tribal rhythms that really compliment the game’s style. They are not over-bearing, and do not make me want to turn the sound down.

In all, Inca Quest is a superb game. With the exception of the rather vague combo system, I can find very little wrong with this game, and certainly no reason why you shouldn’t download it immediately and start helping the professor on his quest!