It must be tough to be a Thanerian. When you look precisely like the subjects in C.M. Coolidge’s kitschy paintings of dogs playing poker, it’s perhaps inevitable that your comrades will introduce you as the “lapdogs” of the Intergalactic Alliance. That’s not to say that the mutt men don’t encourage it themselves; later, after they’ve won a battle against one of the other factions in space, they announce that they won’t “roll over for the rabble of the universe.” This kind of dorky humor weaves itself into most aspects of Imperium: Galactic War, and when you couple it with real time space battles that encourage the use of actual strategy, the result is a city building/strategy sim that stands out from its increasingly numerous competition.

Indeed, one of the high points of Imperium is that its three factions actually feel a little different from one another, thematically. Besides the Thanerians, the peace-loving Intergalactic Alliance also includes run-of-the-mill Terrans and Vulcan-like Oberans (minus the ears). Less lawful good, the other two factions dedicate their activities to the pursuit of profit and conquest, and play host to a number of unusually appealing races like the Sototh, each of whom sport dandy face tentacles that could make even Cthulhu jealous.

Unfortunately, they don’t differ so much at the city building level, which inevitably takes place on what looks like a chunk of hull blown out into space during the Death Star’s destruction. Here you perform the same old dance of upgrading command centers and building research facilities, and in time, expanding your little chunk of scrap metal to include other platforms floating in the infinite.

The main problem is that these processes and others aren’t explained well. Perhaps in their lackluster tutorials, Kabam is acknowledging city building/strategy hybrids are now so common in the social sphere that we should all know the drill, but even with my knowledge gleaned from playing dozens of these things, I still had trouble figuring out how to do small tasks like repairing my ships. The Help panel on the left side of the screen, ironically, wasn’t much help, as it merely told me what I needed to do rather than how. Unlike most social strategy games, which tend to direct you to the exact spot in the menus you need to visit in order to complete an objective, Imperium generally makes you hunt for it yourself. Call the alternate approach hand-holding, call it overly accessible, but the hard truth is that I found myself missing it. 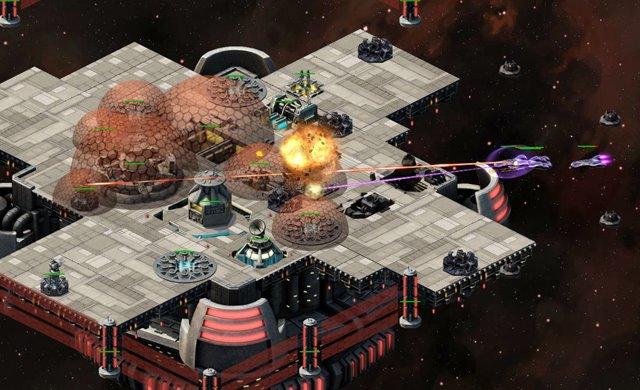 Still, good times await in Imperium‘s battle component, which, much like the fantasy-themed Godsrule we recently reviewed, takes place in real time. It’s fun, it generally works as intended, and it’s the main reason you should play Imperium if you’re at all drawn to social strategy. The main appeal here lies in the way Imperium lets you maneuver ships away from enemy fire, such as the way it allows you to rotate around enemy ships in order to stay just one step ahead of most of the gunfire. Even better, the whole concept is complemented by a dizzying array of upgrades, weapons, and actual ships, resulting in an experience that’s more akin to space strategy games like Sins of a Solar Empire than the average Facebook game.

That’s but a taste of Imperium‘s surprising depth, and considering its strong social features such as team battles with members of your faction and real time chat, it establishes itself as a rare social game that shouldn’t be missed. As with most games in this genre, you’re better off in an alliance, but thus far the community seems active enough to make this usually problematic step less of a challenge. With their focus on real time strategy, both Imperium and Godsrule mark a welcome shift in a popular genre that once seemed in danger of stagnation, and in their best moments, they give us reason to look forward to even more innovative and entertaining strategy games to come.