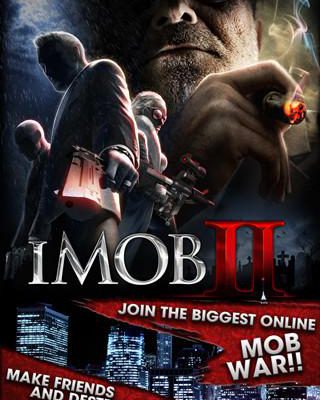 iMob 2 Brings More of the Same to iOS

The text-based social RPG is old. That isn’t to say the genre doesn’t have merit or a fan base, but in a time when mobile games are becoming increasingly more creative, titles like iMob 2 just don’t stand out. Not that the latest creation from Addmired is bad; it simply doesn’t offer anything to entice newcomers to the genre. Still, it’s solid from a play perspective, with only a few minor nuances, such as some balancing issues.

The iMob games are more or less mobile versions of Zynga’s Mafia Wars. Players create a mobster who may have one of three free perks, or one paid one (e.g. faster health or energy regeneration). Once created, they begin doing text-based jobs pertaining to the criminal underworld, starting with petty theft. Eventually, they work their way up to something more akin to organized crime. 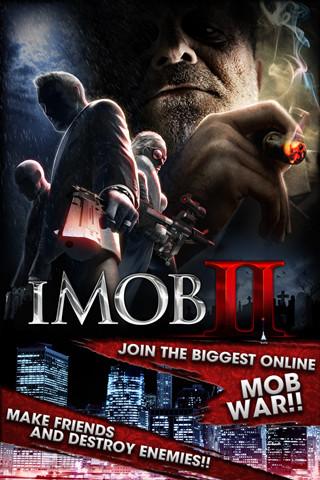 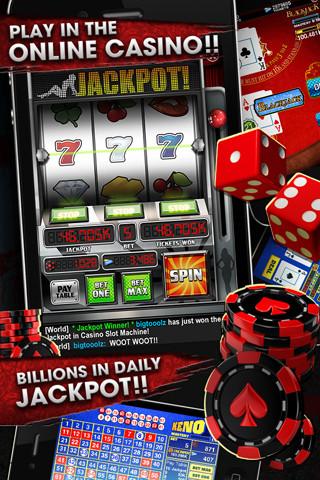 Each job costs energy to complete, and rewards players with experience, coins, and the occasional item to boost their character statistics. It’s all very quick, with a typical play session consisting of only a few minutes. On the surface, that might seem like a negative, but it’s the nature of this social design in that players can quickly check in on their character and move on with life.

Once their energy is depleted (it recharges on its own, slowly), players can make use of stamina to attack other random players or NPC bosses that will also garner extra experience and rewards. This is where the game’s first annoyance comes into play. iMob 2′s quest system challenges users to complete objectives such as “defeat another player” or “defeat a boss.” Players can complete the quests to earn “chips,” which are used in a set of casino mini-games. The problem is that users engage in the game’s player versus player aspect a bit too much in hopes of scoring more chips.

This, in and of itself, isn’t a bad thing, but every time PvP is initiated, someone is going to end up losing health and cash. Such is to be expected with any of these mafia-style titles, but it’s slightly unfair to have that start happening within about two minutes of creating a new character. The effects are not terribly devastating, but they can be jarring and frustrating. 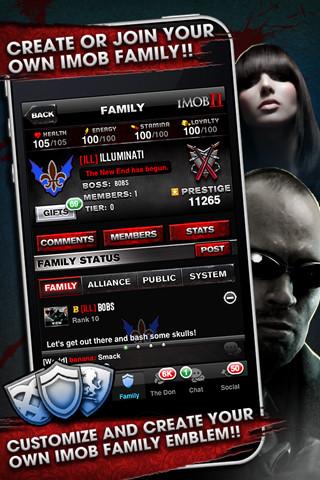 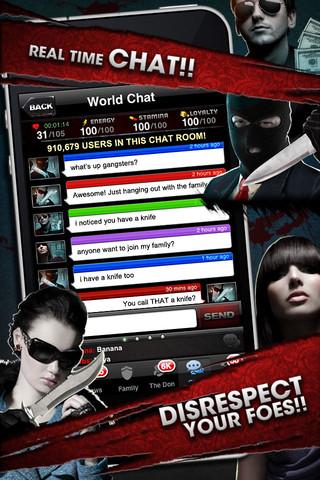 The player can do a few things to combat the problem, like gain new weapons, vehicles, and items. As noted earlier, these assists can be randomly earned during jobs, but most are bought through an in-game the store. However, as an alternative to using in-game cash (or purchased virtual currency), players can also often buy goods using “Tickets” that are earned in iMob 2’s set of casino games. Using tokens, which are earned daily, users can participate in things such as video poker, slots, and so on. Each one is fairly standard as far as gambling games go, and relatively enjoyable in their own right.

Along with the gambling option for upgrading one’s armaments, players can also go the social route of building up a “Family” (a mafia) to fight and attack other competing players with as a group. The concept is relatively passé, however. Truthfully, the only social element that stands out is the live global chat that players can participate in.

iMob 2 is a technically sound game that has nothing terribly wrong with it. It’s cleanly presented and its design isn’t terribly offensive. Nevertheless, it’s based around a dated concept, and doesn’t offer anything new. It’s an app whose fun factor is strictly dependent on whether or not player enjoys this type of RPG.