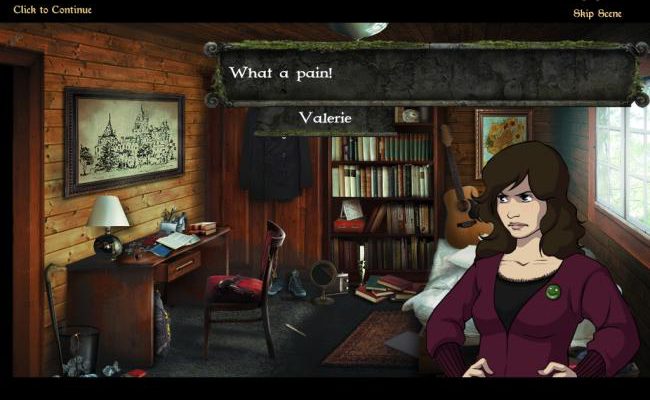 It’s not very often that I’ll just come right out and say that a game is flat-out bad. Then again, it’s not very often that I run into a game like Immortal Lovers. It’s a poorly-designed, technically flawed and utterly shameless attempt to cash in on the Twilight craze with a tale about wicked wolves, conflicted vampires and an angsty teenage girl that’s so immeasurably insipid that it makes Stephenie Meyer look like William Shakespeare. There’s just no other word for it: it’s bad.

The game opens on Valerie, a teenage girl of about 16 who’s angry and moping because her family forced her to join them on vacation in the sleepy village of Brownsborrow. Overcome by the injustice of existence, she runs off into the forest, trips, falls and finds herself lost in a maddening maze of random locations. Things go from bad to worse when she decides to use her cell phone to find her way out, which launches an incredibly frustrating click-and-move pixel hunt to “find a better signal” – a process that must be repeated several times before the game finally moves on. 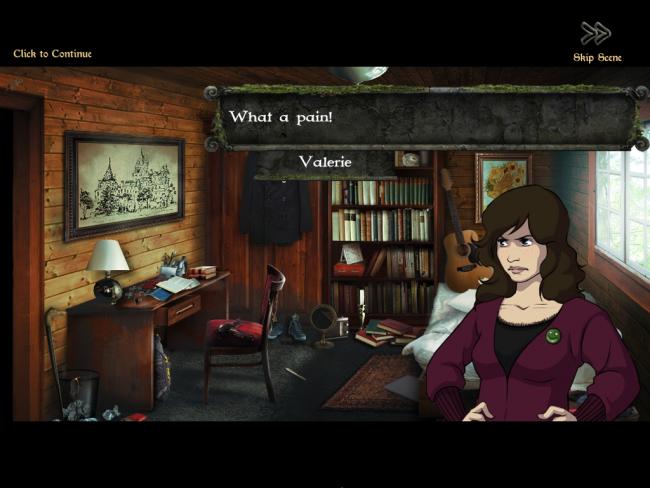 Eventually Valerie reaches the edge of the woods, where she’s confronted by a giant wolf with obviously evil intent. But before it can strike, a tall, dark stranger leaps out of nowhere and fends it off while she runs for home! Writing frantically in her diary after reaching the safety of her bedroom, she expresses hope that she’ll see the handsome hero again someday, and of course she does: His name is Vincent, he has an older brother named Gregor, turns out they’re both vampires, tension in the family, mysterious death of a woman, our love can never be, blah blah et cetera. The plot and its resolution are about as hard to predict as how many feet you’ll have when you wake up tomorrow.

Immortal Lovers is ostensibly a hidden object game but you’ll find yourself spending an awful lot of time with other puzzles as well. Most are fairly unimaginative and simple to get through but “Spot the Difference” games turn up a lot more than usual. They’re easily the toughest part of the game, often annoyingly so, with differences between the images that are often surprisingly tiny and slight.

The hidden object searches are very straightforward, although a number of items are almost unfairly small, and pixel hunting will continue to feature prominently throughout the game. In one area, for instance, you’ll need to cut a path through some bushes and are thus sent to a workshed to find a tool for the job. The shed, naturally, is packed with various sharp implements and since there’s absolutely no indication of which one you actually need, you’ll end up just dragging your cursor along the various rows of tools until it changes and you click. Does it fill in time? Yes. Is it fun? Not really.

Visually, the game shifts gears from “average” to “ugly” at the drop of a hat. Hidden object scenes are fairly clear and conventional but Valerie, Vincent and Gregor are drawn in a basic, cartoonish style and the between-level interludes are simple pencil renderings of varying quality. There’s no voice acting, although that’s probably a plus given the unintentional hilarity that would come from hearing lines like, “You’re so important to me. I want to be with you. Always,” actually spoken out loud. 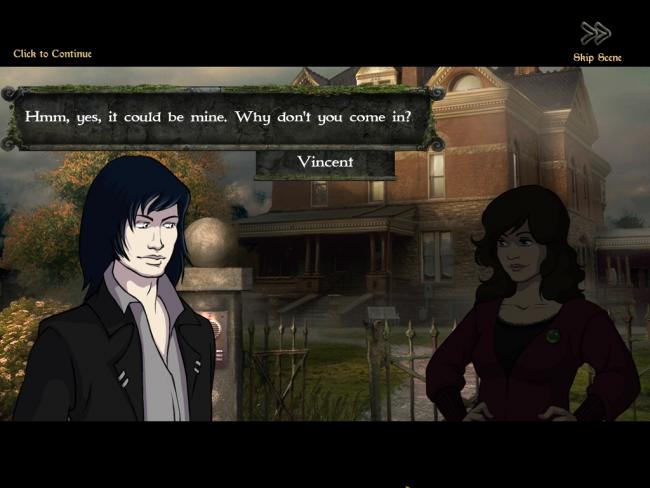 That, by the way, was said to Vincent by Valerie during just their second encounter, and it’s indicative of another of the game’s problems: The story is just awful. I know it’s not fair to hold hidden object games to the same standards of narrative quality as books, movies or even other kinds of video games, but the writing and dialog in Immortal Lovers is silly to the point of distraction. Valerie isn’t a particularly pleasant person, Vincent turns out to be kind of a jerk too and Gregor appears and disappears solely as necessary to provide a speed bump on his brother’s road to undead passion. It’s a groan-inducing mess from start to finish.

Rounding things out are a couple of technical glitches. A Mastermind-style puzzle that appears late in the game doesn’t properly update clues, forcing players to either guess randomly until they get lucky or skip it entirely. The second and more serious issue lies with the hint system, which, when it works, reveals hard-to-find objects with a circle of rose petals. Unfortunately, if you happen to avail yourself of the tutorial at the start of the game, it won’t work; sometimes only a few petals appear on the screen, sometimes just one and sometimes none at all. You can tell the hints are being given because the accompanying “hint music” plays, but nothing useful actually happens. It’s not a game-breaker because for the most part the searches are fairly simple, but it can be incredibly frustrating when you do run into a toughie.

And really, the broken hint system is just the icing on a very half-baked cake. Even if it ran flawlessly, Immortal Lovers would still be a slap-dash ripoff of “Twilight” that offers absolutely nothing that HOG fans can’t find better, elsewhere. To be fair, I may not be the best person in the world to review this game; I am not, after all, a young adolescent girl struggling with feelings of awkwardness and isolation during the first few months of her freshman year at high school. But I do know a thing or two about hidden object games, and this one is such a hack job that I can’t even recommend it to “Twilight” fans. And when a game reaches that point, there’s just no getting around it: It’s bad.