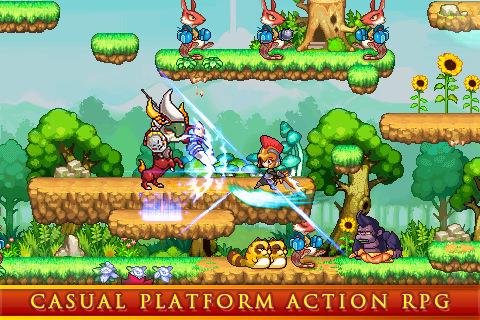 Illusia is the kind of game you desperately want to love. It looks simply adorable, with a charming retro art style, and there’s some solid RPG mechanics that offer plenty of depth. But the game fights with you virtually every step of the way, marring what would otherwise be an excellent experience, thanks to some terrible menus, controls, writing, and level design.

You play as one of two characters — you get to choose between either a young girl or young boy — from a small forest village. After failing several times, you set off in an attempt complete the village exam once and for all. It’s a clever way to begin the game, as the exam is a simple way of easing you into the experience. The goals you’ll have to complete during the exam are identical to the ones you’ll be tackling for the rest of the game

While you’re taking the test several people from the village go missing, captured by a magical forest creature. It turns out that some evil force is taking over these powerful creatures all over the world, causing them to act in erratic and dangerous ways. And it’s your job to travel the globe and stop them.

It’s a pretty generic tale made all the worse by what appears to be some bad localization. The dialogue is stiff, often confusing, and almost always dull. You never get a real sense of any of the characters and your mission to save the world never feels particularly important. There are also a few awkward typos as well.

Illusia plays like an action RPG crossed with a platform game. It’s a side scroller, and almost all of your time will be spent fighting hordes of enemies. Pretty much all of the quests in the game – both for the main storyline as well as side quests – boil down to “go here and kill a few of these,” or “go there and collect some of those.” It’s terribly repetitive, so it would’ve been nice if there was at least some variety to the goals. It doesn’t help that the combat is very one dimensional and in most instances requires nothing more than spamming the attack button.

In addition to enemies, each area of the game is also full of platforms to jump around on. It’s mostly pretty simple stuff but there are a few tricky bits that require precision platforming – but the virtual d-pad doesn’t offer anything close to precision controls. It’s incredibly frustrating to have to keep retrying jumps simply because of poor controls. Illusia also feature a very confusing map system that makes finding your way around more challenging than it needs to be.

It’s also frustrating that the menus don’t really take advantage of the touch interface. Instead you’ll have to navigate them using the virtual d-pad, which is both cumbersome and counter-intuitive. You’ll want to select items by touching them, but you can’t. 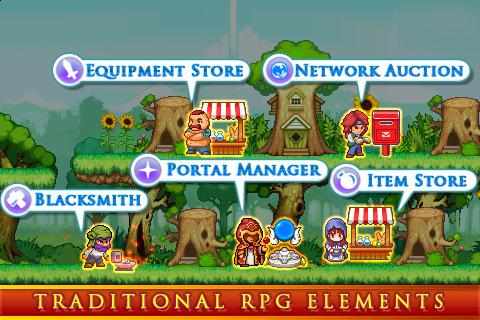 One thing the game does get right is its deep and flexible RPG mechanics. Every time you gain a level you’ll get points you can use to improve your character’s various attributes, as well as learn new abilities and special attacks. And if you don’t feel like fussing about with numbers you can also have the game automatically assign points for you. There’s also plenty of loot to collect, as virtually every slain enemy will drop something. It’s not always useful, but the search for those rare item drops can be quite addictive.

Illusia also looks wonderful, with a bright and colorful 16-bit style presentation. The characters and enemies are well animated and charming, and there’s a lot of variety to the worlds you’ll explore. It’s also great how you can actually see the gear you equip. So every time you equip a new sword or hat it will actually change your character’s appearance.

It’s just a shame that in order to enjoy the wonderful presentation and addictive character customization you’ll need to put up with the rest of the experience. Illusia feels like a port gone awry, and for some, these faults will be a deal breaker. But if you can get past the bad menus, frustrating controls, and trite dialogue, Illusia offers a deep and lengthy experience with plenty of retro charm.