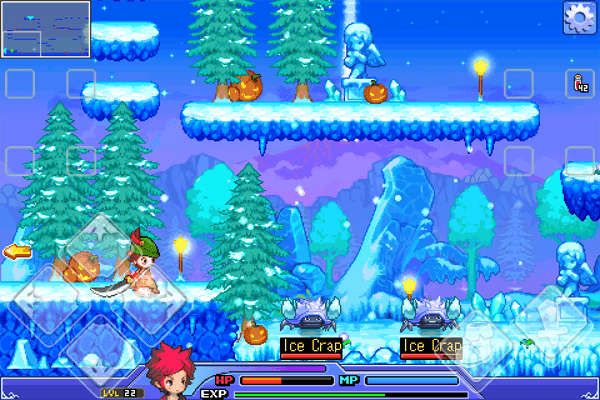 Sometimes in life it is easy to focus a bit too much on grander ideas and let the simple ones pass you by. Illusia II is a game that is guilty of this. While there are a few neat gameplay elements on display, things that shouldn’t be an after-thought, like navigation and movement, are left in the lurch. The result is massive amounts of frustration, followed by anger and disgust.

In Illusia II, you play as a handle of different boilerplate RPG classes—warrior, mage and rogue. The individual classes don’t play much differently from each other , and the game’s quests are the same regardless of the class you create in the beginning.

The bulk of my time playing the game was spent playing as Ares, the warrior class. With this character, you simply run across the screen by using the on-screen directional pad, tap the attack button, and kill the various baddies along the way. The game is a 2D platformer at heart, with classes, levels and equipment thrown in to get RPG credibility. Throw in an evil demon character and you’ve got your standard RPG-story boilerplate locked and loaded.

During your time with Illusia II, you’ll be greeted with a number of menial tasks, the first of which includes gathering apples and attaining tools for characters. As you progress in the game, things don’t get much more interesting, aside from the beautifully rendered environments. Navigating the world, especially early on, is an absolute mess. On-screen directional pads haven’t been an elegant solution for mobile games, and nowhere is it more apparent than how they’ve been implemented in Illusia II.

Certain platforms require you to double jump and then hit right or left to get up and over to a new platform. Early on, doing this successfully will likely take you anywhere from 6-8 attempts. The game implements double-tapping on all directional buttons, and the time that it gives you to do a double tap is too generous.

One of the tricks that I learned after much trial and error was that you need to get to the absolute edge of a platform to complete the jump to a platform up and over from you. Unfortunately, tapping yourself to the left or right to get to the edge will sometimes initiate your character’s dash to the direction. As previously mentioned, the time the game gives you to complete a double tap is a bit too long—probably a half a second to a second—and you’ll run off the platform and have to run back into place. Other frustrations with the navigation include some poor detection between the platform and your character’s body. There was one instance early on where my character went straight through the middle of the platform as I jumped up to it. I repeated to confirm that it was indeed not a fluke.

Combat is handled in a more straight-forward manner, but suffers from being painfully boring rather than maddeningly broken. Simply running to an enemy and tapping the attack button is sufficient to move forward. Considering the design choices that were made to begin with, it is hard to say it could necessarily been improved upon. 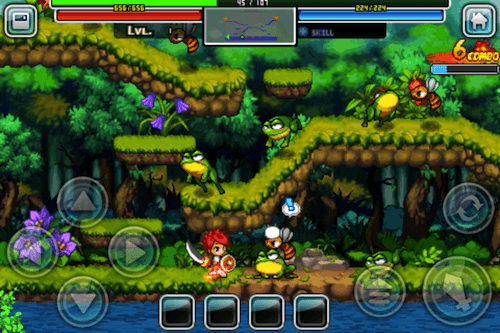 While there are a ton of equipment options, skill trees, and other back-end options, the things that really matter—combat, navigation and story—leave a lot to be desired. The game is free so you’re not going to be out any money, but time is a more precious resource. Save it and pass on Illusia II.