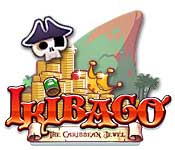 Ikibago: The Caribbean Jewel is a swashbuckling match-three adventure that offers up some unique gameplay gems as well. Players sail the seven seas, adding to their treasure trove by hauling in loot of three or more like-colored barrels while keeping an eye out for the ultimate prize: the famed Ikibago jewel.

The story is set in the Caribbean Islands circa 1680, where you play a female pirate out to prove that she’s worthy of Pirate of the Year honors by being the first to discover the Ikibago jewel. An attractively-drawn treasure map marks your progress as you sail to various islands and ports and meet other pirates who will give you missions to complete.

Mission are all based on a rather unique take on match-three. Columns of different colored kegs slowly float across the water from left to right approaching the dock. By using the mouse to drag and drop the kegs into different positions, you’ll build columns with kegs of the same color to create stocks (at least three kegs are the same color) and superstocks (all five kegs are the same color). Each column must contain at least one stock by the time it reaches the dock, or you lose a life.

The game gradually introduces special kegs, like locked barrels that won’t budge unless you unlock them with one of the keys you’ve collected from corresponding key barrels, and ring barrels that will turn an entire column gold.

You’ll also encounter captain "bosses" that try to interfere with your barrel collecting using tactics like firing canons at barrels to break them, or sending their henchmen to dance on the barrels so that they can’t be picked up.

Although it’s hard for a match-three game to stand out in the crowd these days, I was delighted by the fresh-feeling package that Ikibago: The Caribbean Jewel offered. Beyond the innovative floating barrels concept, I also liked the bright and fun Flash-inspired graphics and the whopping SIX extra unlockable modes, which include a Classic mode (where you can play a string of uninterrupted missions), or Endless (a mode where it’s impossible to run out of lives).

Players can also earn trophies along the way, and the game’s way of displaying them is unique. Instead of a generic trophy room with shelves, your "trophy room" is actually a picture with bits missing – like a sticker book – and each trophy you earn fills in a piece of it.

The downsides: there’s not much in the way of text, and the story could have used more explicit instructions. Some things I felt I was left to discover through trial and error. The gameplay can also start to grind over long play sessions, and some of the missions – such as create X number of stocks – are simple tests of stamina rather than skill and can become tedious.

All in all, however, Ikibago: The Caribbean Jewel is worth a download at the very least if you’re a match-three fan. The unique gameplay twists and light-hearted pirate theme just might be enough to suck you in.