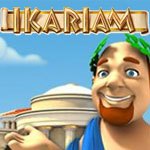 Ikariam is an online multiplayer empire building game based on ancient Greece that reminds me a lot of Civilization or Age of Empires – except that you can play it in your web browser for free and you don't have to download any software to your computer.

To get started with Ikariam, you simply have to visit Ikariam.org, register your character, and select a world to play in. You'll be given a small town on one of the game's many Mediterranean islands, and your goal is to eke out a living by focusing on the three elements of city-building, trade, and – if you choose – warfare.

When I joined the game, I found myself the mayor of the city of Polis on the island of Treehios in the Kappa world. (Polis is the name that every town starts with, but you can change the name to anything you like.) There were nine other cities on Treehios, all of which were owned by other real players from around the world. In fact, there are no computer-controlled characters in Ikariam at all, so every other town you see is owned by a real person.

Your town starts off humble, with a town hall and a bunch of citizens who are willing to work. I immediately sent some workers to the nearby saw mill to begin harvesting lumber to construct more buildings with.

Once you have gathered enough resources, you can click on any blank space in your town to construct a new buildings. These are built in real time – for example, it took 14 minutes of real time to construct an Academy, which allowed me to begin researching new technologies.

Everything in Ikariam takes minutes, and sometimes hours, to be built. Some of the wait times are extremely long – once I had built my Academy, for example, I elected to start researching Conservation, which was going to take 20 hours of real time according to my current settings.

Thankfully, there are things you can do to speed up the process, such as allotting more scientists to the job, or upgrading buildings. One drawback, though, is that you can only have one thing under construction at a time, so because I was upgrading my Academy I couldn't begin to build a Barracks yet.

I didn't get to delve too deeply into the military part of the game (which includes pillaging other towns to steal their resources, blocking a harbor to stop ships from coming and going, or even occupying another town), but the resource-gathering and researching portions are pretty intriguing.

There are more than 50 different technologies to research, including ballistics, gunpowder, anatomy, flight, well-digging, paper and geometry. And like in Civilization, each technology you research opens the door for the next technology, and grants you bonuses and the ability to build new structures and military units – researching Wealth, for example, allows you to begin acquiring luxury resources like wine, marble, crystal glass and sulphur.

Building a port and establishing trade routes between islands is essential to get resources that your own island doesn't have. My island of Treehios, for example, had a saw mill and a glass mine, but no sources of marble or grapes.

Once you've built a palace in your town, you can expand your civilization by colonizing other empty areas on the island. Be warned, though – the bigger you get, the more liable you are to start stepping on other peoples' toes, so it might be wise to extend the olive branch of diplomacy to your neighbors as soon as possible (or, if diplomacy fails, just send some of your own citizens into other peoples' towns to act as spies and report back on what they're up to).

Because everything takes place in real time, I found Ikariam a bit slow in the early going. Because it's browser-based, I found myself treating it as something to have running in the background as I went about my other work, checking in every so often to see if my building and research had been completed yet. But the more you build and the more resources you gather, the richer the game becomes.

Ikariam is free to play, but you can give yourself a leg up by shelling out some cash for a Premium account, which gives you more detailed charts, stats and overviews about your town, citizens, researchers and military. You can also buy temporary bonuses, such as 20% more building materials.

These micro-transactions are completed using the in-game currency, Ambrosia. To buy a Premium account for seven days, for example, costs 10 Ambrosia. You can buy Ambrosia packages starting at $14.99 for 100 Ambrosia.