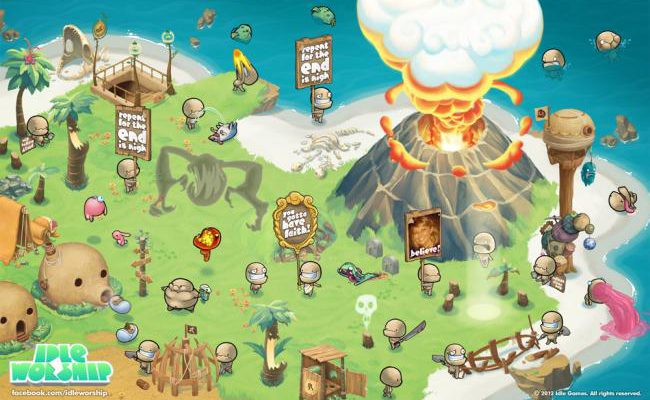 Even gods need a good laugh every now and then

Being a god is tough work. Try making a new race out of water… or maybe sand. Hrmm… maybe if we just combine the two.. GOT IT! The “Mudlings” are now a thing, and they’re a thing that worships little ol’ me. Maybe being a god isn’t so hard after all. Wait – what do you mean I’m not the only one?

Idle Worship takes the god game genre and bring it to Facebook with hilarious results. And we really do mean hilarious – from the first few moments with the game, where your quest to name your island is presented with a “Hello, My Name Is” badge, you know that you’re in for a silly good time. Like creating a visage of yourself to be worshipped that’s made out of bacon. Or giving your worshippers a big godly poke from a giant finger that comes out of the clouds to increase their faith. With the exception of maybe Pocket God, we can’t remember a time when filling the role of deity has been this much silly fun.

The object of the game is to dole out kindness and cruelty on your ever growing populace, turning your godly actions into follower faith and steering your flock in the right direction to continue spreading the good word. On the most basic front, this means sending them out to gather materials like wood and stone to construct things like homes and honorifics to your greatness. But to keep them hard at work, you’ll also want to keep their faith up – which means performing a variety of powers, like giving the gift of dance, possessing a tree, or sending the canine-like “dogma” creature to the island to roll over and play dead (and by dead, we mean “pee on the Mudling.”) Whether mean or nice, your godly action will remind them that there’s somebody holy in charge, and that’ll keep them on their little Mudling toes.

What’s most interesting about Idle Worship is how the game handles its social play. You’ll be playing in real-time, so when your followers do things like offer up gold, other players watching could swoop in and steal it before you click. Likewise, you can perform any of your godly powers on neighboring islands, sharing the kindness of blessings or wreaking the havoc of curses as you see fit. You can even turn another player’s followers into a prophet, preaching the word of your godly love in new lands (and netting the other player a bonus in the process). Or you can make them a convert, bringing more minions into your church in a way that leaves a negative impact. 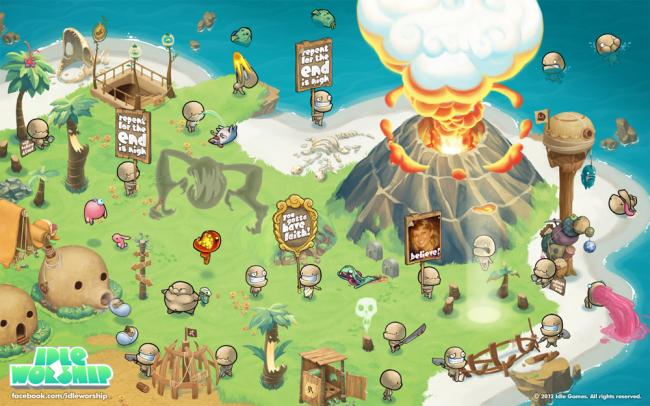 And while you can visit the islands of other players (not just friends) and perform godly acts of kindness and cruelty, the game also offers up a neat trading element. Let’s say you have a lot of wood, but need a lot of stone; Idle Worship is set up in a way that you can communicate that to the world and attempt to create your own heavenly economy of sorts.

Like any good civilization game or god game, the number of followers you devote to a certain task will affect the amount of time it takes to complete. So while you might want to pay the premium price to speed up construction on your dock, you could alternately allocate more followers to the building project to see things speed up.

But ultimately while there’s a lot to do in Idle Worship, there’s also a lot of time spent… well, being idle. Every power you use consumes energy, and this is a game that’s primarily about using powers. Want to build something? You’ll need more wood, and since the trees take 24 hours to regrow, you’ll have to use your “regen tree” power over and over. Want to wreak havoc on another player’s island? After only a minute or two of power-mad godliness, your energy meter will be at an end. Once you get through the initial half dozen or so levels, Idle Worship devolves into a game that’s more about quick bursts of play than it is about a substantial gaming session – but it feels like a game that should lean more heavily to the latter. 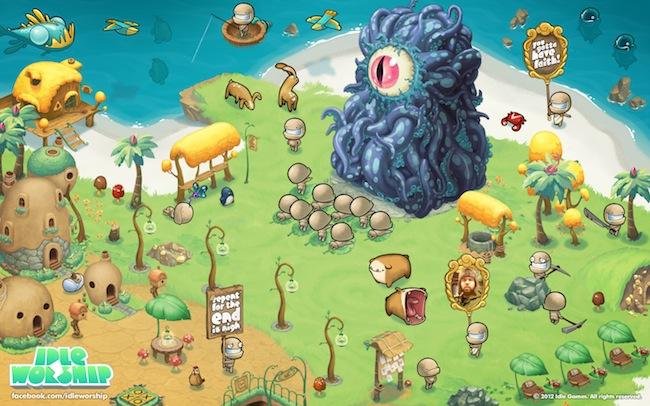 It’s a shame too, because other than this one complaint, the game has a tremendous amount going for it. It’s well polished, has a good deal of variety, is fall down funny at times, and really manages to evolve the notion of what multiplayer on Facebook means.

There’s been a lot of talk about the next generation of Facebook games, and Idle Worship is a title that mostly lives that ethos of evolution. With plenty of charm, polish, and humor – and more things to do than you can shake a stick at – Idle Worship seems to be the answer to our god-gaming prayers. Even with its fast energy-depleting ways, this is one altar you’re going to want to worship at.

Doctor Who: Worlds in Time Review