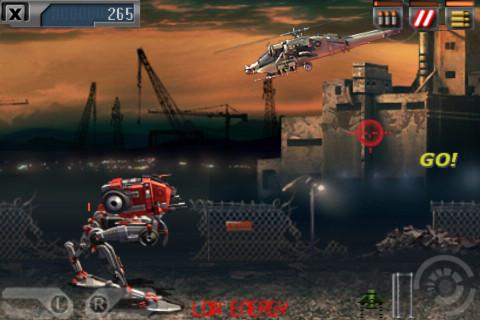 iDamaged is one of those games that seems like it should be able to do no wrong. After all, when you have giant mechs stomping around a battlefield, reigning hell down on the enemies scurrying about, this sounds like it’s an instant recipe for fun. Somehow, though, the recipe never comes together in this game; instead, the result is a clumsy, frustrating mess.

iDamaged is a side-scrolling action game where you control a battle mech prototype that bears more than a passing resemblance to the AT-ST Walkers from Return of the Jedi. There’s a story told via text-heavy screens, but it’s a little hard to follow. There’s something about how your homeland is under invasion from the evil Dark Phantom army, though things are kept pretty vague and it’s hard to actually care about the events unfolding in the game.

The story isn’t the only mysterious thing here, because it takes a while to figure out the gameplay mechanics, too. There’s no tutorial, and the help screen doesn’t explain the subtler elements in the game. So you’ll have no real guidance the first time you find yourself walking over those little round things in the middle of the street (hint: they’re land mines and you need to shoot them) or aren’t sure which vehicles won’t shoot back (I’m still not completely sure on that one).

When the game starts, you’re asked to customize your mech’s weapon loadout. There are a lot of options, but the game doesn’t really do a good job of helping you figure out what you should get when you first start out. Additionally, there’s no option to reset things if your first choices don’t work out, so you’d better choose wisely.

As you march your mech across the screen, you’ll have to tap spots to move the targeting reticule to where you want to fire. You then press the fire button to shoot your main weapons (which are prone to overheating), double-tap the screen to launch secondary weapons, swipe your finger across the screen to call in air support, and can even activate a temporary shield by tapping the mech itself. 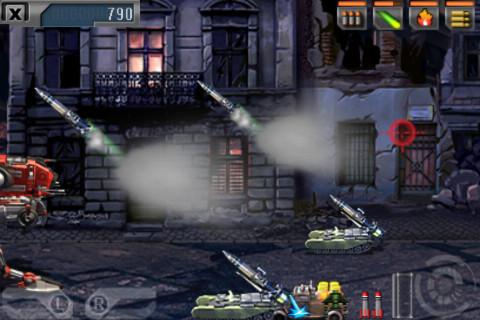 Targeting is, honestly, kind of a hassle. It doesn’t take too long before the action on the screen gets pretty crazy, and enemy vehicles don’t really sit still, but the reticule won’t track an enemy if it moves. Additionally, if an enemy is behind the mech, there’s no easy way to aim at it; instead you’ll have to march backwards until the vehicle is either below or in front of you (and can then be shot). This can be especially problematic if you have to walk all the way to the left side of the screen, since your health bar will be out of view and it’s impossible to see just how much damage you’re taking from enemy fire during these moments.

Now, you may not be able to auto-target your enemies, but they’ll have no problem hitting you. It’s kind of ridiculous, especially when motorcades filled with missile trucks roll down the street and murders of helicopters buzz you from overhead.

There is one thing that definitely deserves some praise in the game, which is the visual presentation. Even though the game is 2D, it looks really nice, showcasing harsh and unforgiving urban environments and a substantial number of different vehicles. It’s actually a little surprising, given how frustrating the rest of the game is.

As tempting as “side-scrolling mech warrior action” sounds, it’s probably best if you give iDamaged a wide berth. The gameplay isn’t intuitive, the mechanics are way too frustrating, and the inability to aim behind you is maddening. Just fire up Robotech on Netflix Instant instead. Trust me, you’ll have a much better time.