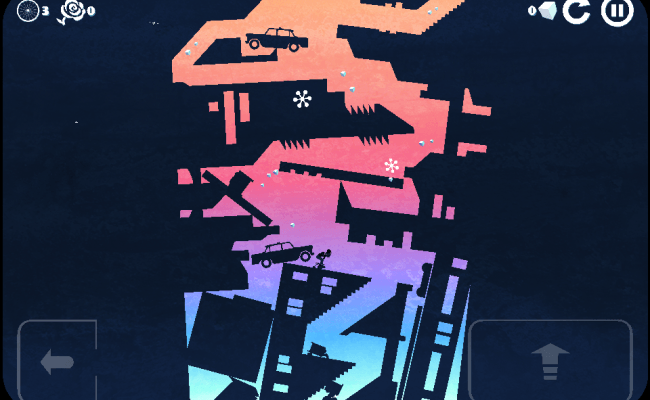 Naked man, tiny bike, fish-kissing – the game has it all!

Icycle leaves so many questions floating around in my head. Why is the protagonist naked, especially in such harsh, freezing conditions? Why is he riding on such a tiny, ridiculous bike? Why is he so desperate to kiss a fish on the lips? I’m totally OK with having these questions left unanswered, though, given just how entertaining this entire, messed-up experience is.

This is a journey which is part-gorgeous, part-hilarious, with a side-order of panic. As you make your way through the world of On Thin Ice, you’ll regularly be left speechless thanks to a combination of slick visuals and fast-paced level design. The controls can be a little troublesome in later levels, but in general this is a fantastic experience for your iThing.

Dennis is a strange man riding on a rather small bicycle, looking for love in the most peculiar of places. Over a series of 20 levels, you need to dodge around obstacles and traps, keeping Dennis alive as levels tumble down around you, and generally try to kill you in some of the most ludicrous ways possible.

Icycle: On Thin Ice is wonderfully varied in its level design, its customization options, its storyline, and generally everything else it has to offer. It’s essentially impossible to become bored, as every minute offers something entirely new. One moment you’re bounding through a fairground, and the next you’re in the midst of a world-ending war.

It helps that Icycle isn’t just varied – it’s wonderfully weird and hilarious too. Remember when I said in the intro that you’re looking to kiss a fish? That’s probably one of the less-strange things you’ll witness in this game. The amount of creativity that has been bunged into every corner of this experience is rather extraordinary.

And the game is remarkably good-looking throughout. The visuals are tidy and vivid, and slide around with gorgeous finesse. You’d be hard-pushed to find a game on iOS that looks as fantastically smooth and crisp as Icycle, and given there are hundreds of games released for iOS every day, that’s really saying something. 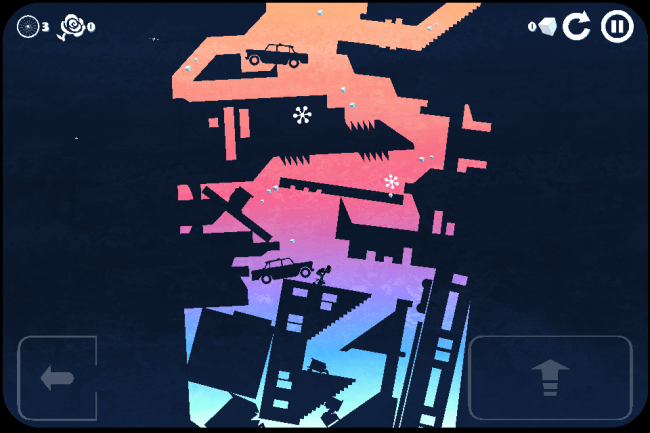 You’ll want to keep going back to see each level again and again too, thanks to special challenges that ask you to try tackling scenarios in different ways. Don’t die once, it says. Don’t collect anything! Stop jumping! It’s all rather simple, yet works wonders to get you going back over and over to collect absolutely everything (and if you do manage to collect everything, you’ll get the original Icycle game for free!)

The controls are refreshingly solid – to a point. For the first half of the game, I felt like I was in full control and the virtual buttons were doing the job a-ok. In later levels when the action became more heated, I found myself slip-sliding around a bit too much, and wished the movement were a bit tighter.

Icycle: On Thin Ice is well worth a pop, with varied, exciting, clever gameplay the dish of the day. If the sound of dressing a naked guy up in just a monocle and riding him through icy backdrops on a penny farthing is your idea of a good time, you need to grab this – and let’s be honest, who would turn that down?