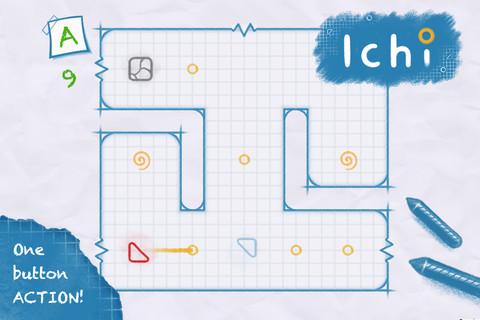 Don’t let its simple nature fool you: Ichi is one tough cookie

There’s something you all should know: I love puzzle games. It all started with Tetris Attack for Game Boy, a title I sunk hours into every single family road trip. Likely because of that experience, I’ve come to find that I prefer playing them on mobile platforms. They’re perfect for playing in small doses, a perk that Ichi by Stolen Couch Games benefits from quite a bit.

Every level in Ichi revolves around a single goal: Guide the tiny pixelated ball to various marked destinations, all the while avoiding obstacles like jagged walls. On a mechanical level, it’s very easy to master. A tap of the screen causes triangles on the playing field to rotate, and where the ball hits them affects its trajectory. All of this is done in real time, meaning you have to act fast to save the seemingly suicidal ball from an untimely death.

I was surprised with how quick the game ramped up in difficulty, but the puzzle fiend in me was equally as pleased. Ichi doesn’t feed you new mechanics so much as it volleys them at you at a rapid-fire pace. It keeps things interesting, and respects the intelligence of the player. Not long after you begin playing, you’ll be introduced to concepts like triangles that disappear when you tap the screen and lines you can draw and later bounce off of by holding your finger down. It’s a lot to soak in at first, but I preferred it to games that slowly dole out new mechanics to the player.

As if all of that wasn’t enough to handle, Ichi is a game that demands quick reaction times. It’s one thing to figure out which triangles should be flipped and when, but it’s another to do so at a fast enough rate. If you’re the type who works well under pressure, you’ll probably fare better. I frequently panicked and shifted a triangle one too many times, resulting in more than a few losses. At first, anyhow. The more I played, the better I got. Crazy notion, right?

Offering a chance for players to flex their mind-muscles even more, Ichi also includes a level creator. A ticker on the main menu shows how many levels have been created thus far, and there are 102 availableat the time of thiswriting. Players can rate levels created by others by assigning different words to them a la LittleBigPlanet, ranging from ‘artsy’ to ‘rubbish’.

Creating a level is a pretty straightforward affair. You choose from a variety of templates, then pop in items wherever you see fit. You aren’t forced to stick with the provided templates, either. The ‘Wall Tool’ allows you to essentially reshape the entire area, so you can make just about whatever you want. I suspect this will lead to levels more difficult than even the final ones in the main mode, but only time will tell.

The game won’t necessarily blow you away with its graphics, but it does have a very charming pen-and-paper look to it. I’m all for great graphics when applicable, but Ichi is the kind of game that really doesn’t need it. The gameplay is compelling enough to keep people addicted, and flashy graphics wouldn’t do much to improve the experience. Plus, a paper aesthetic just feels rightin a game that encourages players to make their own levels. 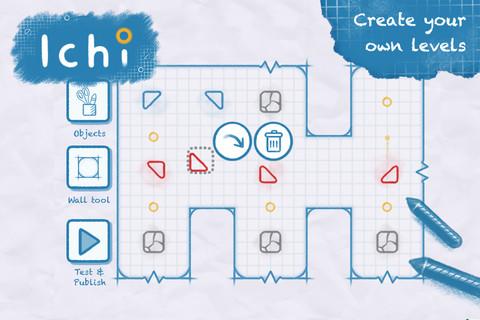 The only real complaint I can lodge against Ichi is the dearth of content. Launching with 51 levels – though with the promise of more on the way – you’ll likely complete it in a short period of time. The user-made levels solve this to an extent, but it would be great to see alternate modes or anything outside of the main mode.

Ichi is a charming little puzzle game that’s easy to learn and incredibly difficult to master, if you’ll allow the cliché. And just to clear any potential confusion, I’m pretty sure it has nothing to do with Ichi the Killer. Unless there’s some grim subtext I’ve not managed to pick up on, that is. I guess you could say this whole situation is… puzzling. To add to the mystery, “Ichi” is the word for “one” in Japanese, and the game is very much a one-button affair. Could that be the link? I leave that mystery to you.