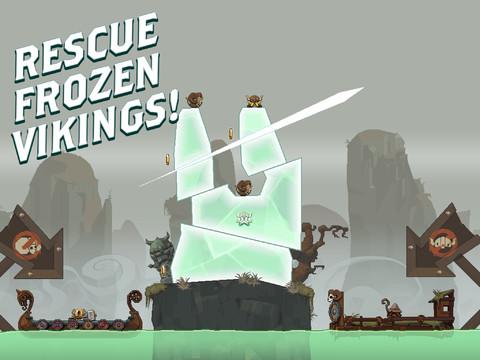 They come from the land of the ice and snow, from the midnight sun where the hot springs flow. Icebreaker: A Viking Voyage is a refreshing puzzle/physics game that reminds us of the hazards the mighty Viking warriors stood up to during their exploits: ice, freezing winds, evil magic, and troll boogers.

Icebreaker: A Viking Voyage is a product of Rovio Stars, a publishing effort that seeks to bring mobile gaming’s best and brightest offerings to the fore. If Icebreaker is any indication, we’re in for some good times from Rovio Stars. That said, the game is a mobile adaptation of a popular Flash title, and there are some lingering play issues as a result.

The fun begins with a pack of Vikings holding an ice cutting/breaking competition. You, the under-dog, learn how to cut out fellow Vikings that are stuck in chunks of ice. These early stages serve as the game’s tutorial, and also set the humorous tone for the rest of the levels: even though you win a trophy, for example, you’re expected to share it (and you’re ecstatic, because you get to “share it with [your] hero”).

Alas, the festivities are cut short when an ill wind blows across the sea and carries the Vikings to desolate points of land. Many are stranded; many others are trapped in chunks of ice. Even though you’re an ice-cutting n00b, you need to rescue your hairy brethren and save the day.

Icebreaker: A Viking Voyage is easy to grasp, though it’s quite difficult to master. The goal of each level is to get your Viking friends to the safety of your ship. Some are trapped in ice, while others need to be coaxed by having the ice cut from under their feet.

You cut through ice by sliding your finger across it. If a Viking lands anywhere except on the deck of your ship, he’s done for. And you can bet there are plenty of hazards for your pals to bash into, including water, spiked iron, and wooden stakes. Luckily, not every cut results in a straight drop: chains, ropes, and cannons can swing and propel Vikings and help them land safely. Early in the game, troll snot can also assist you by acting as makeshift ropes and glue. It’s OK if you gagged a little when you read that.

Icebreaker: A Viking Voyage is a funny and original experience. You can open up alternate paths by collecting coins in each level, which gives the game a lot of longevity. What’s really nice is how there are dozens of different ways to tackle a level, and ideally, you want to complete each stage by using as few cuts as possible. 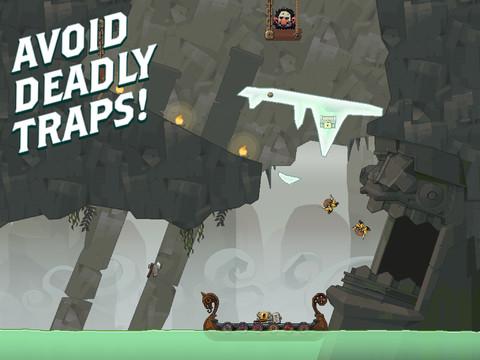 Doing so might prove a bit difficult, though. Playing the average level in Icebreaker requires a lot of scrolling, which can be done by sliding two fingers on the screen. Needless to say, your two-finger scroll is often registered as a cut, which is supremely frustrating when you’re going for a low-cut run. Moreover, it can be difficult to safely navigate your way around traps in levels that require you to stop and scroll a lot.

The controls in Icebreaker: A Viking Voyage are easy enough to get used to given time, however. Between the game’s good humor, varied gameplay, and interesting puzzles, it’d be a shame to sit out this voyage, even though hitting an iceberg is inevitable.