By David Laprad | 14 years ago 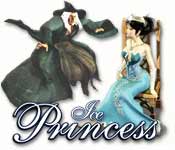 A lot of casual games masquerade as puzzle offerings. But let’s be honest: matching gems and finding objects doesn’t tease our brains. Ice Princess from SoWhat! Software Studios does, though. A puzzle game through and through, it’ll have you scratching a bald spot into that beautiful mane of hare you brush each morning.

The story reads like some kind of hackneyed platform game: a wicked witch has kidnapped a beautiful princess and trapped her in an ice castle. If the young girl remains in the castle too long, her heart will freeze and she’ll lose all of the love and compassion with which she’s filled. To make sure this doesn’t happen, a handsome and equally youthful prince steps up to rescue her.

The witch plays her part well, though, encasing the prince in ice and placing 100 puzzles in his path in the hopes of keeping him from ever reaching the object of his affection. You take the role of the young ruler as he makes his way through the increasingly difficult challenges.

Thankfully, the gameplay is more engaging than the story. Each stage consists of a series of tiles laid out in a unique pattern. To beat a level, you must use your mouse or the arrow keys on your keyboard to navigate the prince from the beginning of the maze to the exit. This is easier said than done, as you can only flip or roll the ice block in which the prince is trapped, and must do it in a way that doesn’t cause part or all of him to fall off the edge of the maze. Since the prince is two tiles tall and one tile wide, you’ll spend a lot of time flipping and rolling him over clever arrangements of tiles.

In addition to reaching the exit, some of the levels contain gems, all of which must be collected. You can also gather the occasional guardian angel, each of which will set you back on the maze once when you screw up. They’re helpful if you’re concerned about getting a high score, as Ice Princess awards points based on how long it takes you to complete a stage as well as the number of moves you make. You can restart as many times as you want, but your score will show it if it takes you several tries complete a level.

If all you had to do was get to the exit over normal tiles, Ice Princess would get boring after about a dozen levels. Knowing this, the developers threw in a few unique tiles that will have you stroking your chin while going "Hmmm…"

The first one you’ll encounter is called "shattered ice." If you stand up while on one of these tiles, the ice will break and the prince will fall through; all you can do is roll across these wafer-thin surfaces. Later, you’ll come across "trick snow" that changes to shattered ice if you stand on it and "thin ice" that disappears once the prince travels over it.

You must also activate a number of navigational aids to get through some levels. These include teleports used to transport the prince to different portions of a stage and two kinds of switches: one that activates a bridge across a gap whether the prince stands or lies on it and another that only extends a bridge when the prince stands on it.

The puzzles are enough to make Ice Princess worth playing, but for some reason, SoWhat! included a pointless mini-game in which you try to knock all of the witch’s "marbles" off a circular playing area before she eliminates yours. In addition to being out of place in a game of mental challenges, the prince is unfrozen, which makes no sense in terms of the story. Thankfully, you can skip these stages.

Just because SoWhat! poured a lot of creative energy into the puzzles doesn’t mean they skimped on the visuals. Although the background graphics have a slightly gaudy look, you’ll travel through several unique environments containing a variety of objects. None of this has any bearing on the gameplay, of course, but they do give your eyes a little candy to munch on while your brain is chewing on puzzle solutions.

When it comes to puzzle games, Ice Princess is a solid (no pun intended) offering. If you’re not careful, the sun will rise and set before you realize you missed a night’s sleep. And because some of the puzzles are so tricky, that might happen more than once before you finally melt the heart of the lovely princess at the end.