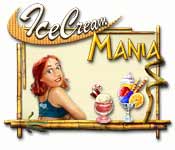 Don’t glance at our 3 out of 5-star rating for this game and write it off as a waste of time – on the contrary, we had fun with Ice Cream Mania – but it plays just like the other five dozen time management games available today. In the end, it’s simply an average yet entertaining downloadable diversion that, at the very least, is worth playing the 60-minute free trial.

In the comic book-like presentation you learn that ice cream magnate Henry Rich has died, leaving the family to fight over his wealth. But according to Rich’s will, each of his two daughters must start a business from scratch, and whoever makes the most money within a year will inherit the entire family fortune. You play as Cindy, whose honorable intentions are to keep her father’s ice cream legacy alive, while her greedy sister simply wants her father’s cash to spend it frivolously.

As you can tell, Ice Cream Mania starts out with a promising premise, but the developers don’t run with it. In fact, you don’t hear about the other sister while you’re playing the game, therefore you lose your motivation to keep going. It would’ve been great if additional cut-scene story sequences showed your mean sister’s progress to help give you more incentive to win. Ah well.

In the game-play department, though, Ice Cream Mania, while predictable, is fun. Not unlike Cake Mania-style restaurant games, here you’re in charge of an ice cream stand and must serve ice cream to suit a customer’s taste. Customers will belly up to the counter and a visual representation of what they want can be seen about their head. So after you give them a menu you might see that a headphone-wearing girl wants a yellow scoop of ice cream (lemon gelato?) in a regular cone and with chocolate sauce. In this case you’ll click the yellow button on the ice cream machine (instead of blue, red or green), then click on the appropriate cone from a list of cones and cup styles, and then on the topping station select the brown button for chocolate sauce instead of vanilla or strawberry. Give it to the customer before they lose patience and they’ll leave a tip, which you’ll click on to pocket.

Like many other games of this kind, multiple customers approach you at the same time so you’re multitasking like mad to serve everyone in a timely fashion, not to mention they’ll begin to ask for more complicated desserts like two different color scoops and various garnishes like parasols, candy canes, orange slices and waffle wedges. If customers wait too long, they leave, and if you make a mistake, such as putting red ice cream on top of blue ice cream when it should’ve been the other way around, you’ll need to toss it in the trash can and start again.

If you reach the minimum cash quota by the end of the day you’ll be able to spend that money for additional ice cream stations, more garnishes, faster equipment and extras like music or candy to calm customers, which may be impatient tattoo-donning surfer dudes who want to hit the waves or nice old ladies who aren’t in such a rush. Money carries over to the next day if you want to save for a pricier item. That said, there might be a technical glitch in the game because you start the next day with $0, but when you go shopping at the end, it adds yesterday’s total with today’s, therefore you indeed can save if you want to.

Another issue is some of the garnishes can be hard to see – the waffle wedge, or whatever it is, for example — which sits right underneath the orange slices and is very hard to see.

The game’s graphics are attractive as you work your way through 50 levels spread out over five locations. On the beach levels you’ll see both day and night scenes, boats sailing on the water, and people on the beach. Relaxing sound effects add to the fun. Players will also earn keepsakes from customers, kept in a box, which provides decent incentive to keep going since you want to see what you’ll get next.

But because the game-play is so close to many other time management simulations, and because of some user interface issues and lost opportunities with the story, Ice Cream Mania is merely an average game that could’ve been a lot more if the developers worked out sweet ways to make the game more unique and engaging.