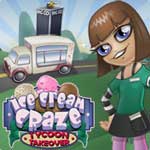 Time management game Ice Cream Craze returns with a sequel called Ice Cream Craze: Tycoon Takeover, complete with new characters and the same good graphics quality. Unlike most time management games, this one lets you choose where to play next instead of following a path from one end to the other. While this approach gives you more control, the game’s pace requires lots of patience.

Anna likes BigCo’s ice cream, but Grandma isn’t so thrilled. She used to own an ice cream shop until a mysterious tycoon from BigCo took over. As fate would have it, an ice cream truck appears with a For Sale sign, and Anna decides to go into the cold biz. Her friend Casey lets her set up the truck to sell ice cream by the park. If all goes well, she’ll let you have a stand that she’ll run for you while you sell in other places around town.

This leads to an idea to build stands all over town. Thus, your goal is to have Level 3 stands in all nine locations, and $5,000 cash to challenge BigCo. First, you have to earn the stand and then upgrade it twice. These stands make money without Anna doing anything. Level 2 stands make more than level 1 and level 3 make the most. Every level makes up a single day and she works in her ice cream truck by a magic store, beauty salon, creepy place, movie studio, electronic store, alien place and a detective agency. All the characters behind these places also act as customers at the other locations. Some lose patience faster than others do, and if they’re out of patience, you’re out of a customer.

Sometimes you have to pay to complete a challenge for an upgrade to your ice cream truck or ice cream stand. So you don’t go upgrade shopping as you would in most time management games. Other times you pay for cash so you can afford to play for an upgrade. Most upgrades aren’t your typical upgrades because you’re outfitting your truck with things like lights and magic while others like flooring and walls remain typical.

Conveyor belts deliver all the ingredients that Anna needs to put together the scrumptious desserts for the customers. Customers request cones, cookie sandwiches and brownie sandwiches with different flavors of ice cream. Often Anna has to add one of three toppings. Those finicky customers expect her to put the ice cream on in the right order or the order has to go into the trash. FinasllAnna delivers the ice cream and picks up the cash.

Ice Cream Craze: Tycoon Takeover comes with an improvement that lets you access the game’s options without exiting the game as in the previous version. Clicking ahead works great, and a checkmark appears briefly to let you know you clicked. However, when the orders become difficult to manage, you don’t have time to pay attention to subtle visual aids. Instead, the checks should stay there. What’s more, you can’t cancel actions.

Anna must be related to Jan as she also moves too slow for most of the game. Even drinking an espresso isn’t enough. So the game requires patience.

Like Jan, Anna can’t carry more than one order. The good news is that she can pick up cash and espresso with an order in hand. You can remove one ingredient at a time as long as you have available plates. Beware that once you squirt toppings onto an order, you can no longer remove any part of the ice cream. If the order is wrong, it will have to go in the trash.

Later levels do get tricky as customers order a mix of ice creams in different order. You also can’t hold off on collecting cash to prevent new customers from entering. The cash disappears if you take too long. Although the game feels repetitive, it’s an improvement over the original especially since it gives players the ability to go wherever they want to sell ice cream.

The music grates, and the game freezes a few times and stopping the game in the Task Manager is the only way to close the game or reboot the computer. When this happens, it doesn’t always save your progress exactly where you left it.

With the tycoon behind BigCo being a mystery, it may intrigue some folks to play to get revenge for Grandma. Ice cream lovers will most likely enjoy Ice Cream Craze Tycoon Takeover the most. The game’s challenge gradually grows harder unlike some games where it suddenly becomes too hard. Even when it gets harder, Anna still moves at a pace slightly faster than a turtle. The character’s pace doesn’t change much after an hour’s play, so you can decide if the pace is your speed or not.