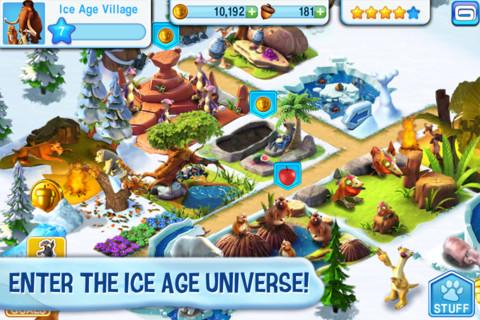 Ice Age Village is a peculiar case. It is very clearly an advergame for the upcoming Ice Age movie, yet it certainly doesn’t lack the quality most advergames do. Those who turn their nose up just because of the game’s intentions are missing out, for sure.

Keeping with the continuity of the feature films, we find out that Earth is starting to melt and transition out of the ice age, and with it Pangaea is starting to break apart (hence the name of the new film Continental Drift) This predicament tasks you in finding new homes for the series’ characters and other creatures within the Ice Age canon.

If you’ve ever played any modern social games where you were forced to build buildings, Ice Age Village follows that routine with a bit of a deviation. Let’s face it, variety is what can make or break a social game, and this one does a decent job in that respect. For example, you can breed any of the types of animals in the game, including wooly mammoths, sabre-tooth tigers, prehistoric birds, and more.

If breeding animals makes the game sound like Dream Zoo, you’re assumption would be correct. Although here, progress moves much quicker, so you won’t spend so much time just waiting for the next activity to complete. The families you create here make a lot more money for you than in Dream Zoo, which obviously makes things more fun.

Besides being better at rewarding your breeding, Ice Age Village is also a bit better at giving you activities to do that can earn you additional bonuses for participating. You can rub on eggs to earn additional money, for instance. Another mini-game plays like Fruit Ninja, featuring Scrat swiping at jumping piranhas.

Quests also fill things out, providing you with clear goals so that you always have an idea in mind before building your next habitat. And while some of these goals can take hours to complete, the rewards are definitely worth it.

As far as being able to play with friends, you can connect to Facebook to find pals that are also playing Ice Age Village. Unfortunately you won’t be able to do much while there (it’s a fairly simple Where’s Waldo-esque mini-game), so I’d imagine you wouldn’t find yourself doing this often. Still, what good is a social game without the social?

As we mentioned earlier, this game is intended to be an advertisement for the upcoming film – but there’s a bit more to it than that. You can build a movie theater and watch a short film set in the Ice Age universe, featuring Scrat; this being a nice bonus for those who just can’t get enough Ice Age in their lives.

Walking away from Ice Age Village feeling satisfied is an easy thing to do, especially if you’re a fan of the film series. While it would have been nice to see a bit more social in this social game, the gameplay that exists stands on its own as being fun and compelling. Considering the cost of entry, I’d recommend the game to anyone even mildly interested.