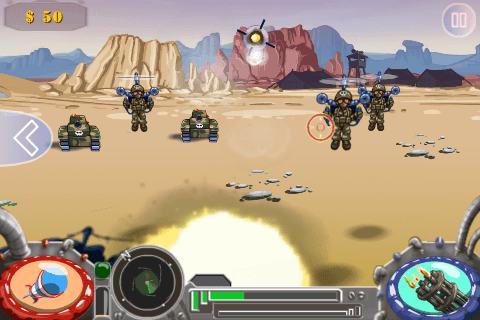 A game full of sound and fury, but delivering only mediocrity.

So there I was. The thin red line that was the only thing holding back an enemy country from invading my homeland. I shot down planes, destroyed tanks, and ended mens’ lives as I sat in my tower with my guns and my missiles. And then, in the midst of a particularly hectic battle -one in what seemed like a never-ending series- I got bored, turned off iCannon: Hellfire on my iPhone, poured myself a bowl of Lucky Charms, and realized I had no real desire to return to that world.

The game is a first-person defense title, with players shooting down enemies who approach their gunstation. The twist here is that the iPhone’s motion-sensing technology is used to control the gun’s aim, as represented by a set of crosshairs. Basically, this is the same thing as those beachhead defense arcade games that were popular for about ten minutes back in 2000.

There are two basic attacks: missiles and guns, which are controlled with two buttons at the bottom of the screen. In order to keep the action frantic, enemies start approaching players from different sides which requires players to rotate the camera and spot them. Thankfully there’s a radar system in place to keep players informed of where enemies are; on top of that, it’s easy to rotate the camera with both the motion controls and/or buttons on either side of the screen.

As the levels progress, players can purchase upgrades to cope with the game’s increasing difficulty. These upgrades come in the form of increased armor, new powers, firing rates, damage levels, radar capabilities, and the like. Each of these upgrades costs “BulkyCoins”, which are earned by taking out enemies. This is a rather slow process, so players are presented with the option of simply buying these coins outright with real money.

There’s a bit of charm to the game’s visuals. The narrative is told via static portraits and text screens. The character designs are actually pretty reminiscent of the Advance Wars strategy games on Nintendo’s handheld consoles, though it should be noted that there are currently a couple of grammar errors in the game’s text. The actual levels and character designs are nicely-designed, sharp, and brightly-colored. The problem is that it all starts to blend together after a while, especially given how many enemies appear in each level. 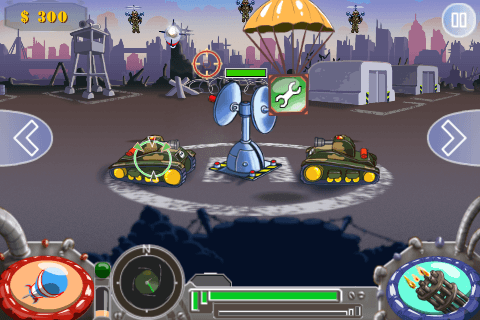 The audio, meanwhile, is a bit disappointing. The music is vaguely patriotic and tinny, and there’s no option to play music from a player’s iPhone library. The sound effects, meanwhile, are fine: they get the job done, but they’re nothing overly special.

There’s really nothing bad about iCannon: Hellfire. That said, there’s nothing all that great, either. Its production values are solid, as are its controls, but the problem is that it never feels all that fun. It’s hard to pinpoint exactly why that is; there’s just a certain je ne sais quoi missing from the overall recipe.