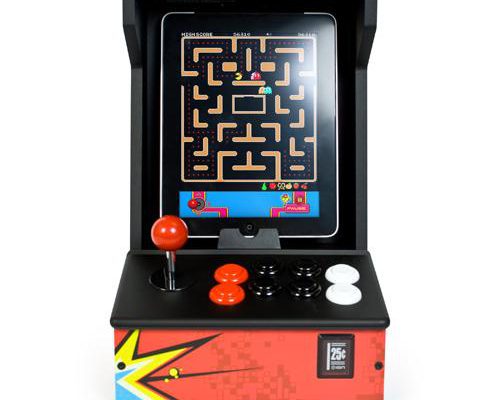 If you’re looking for an amazing arcade exeperience for your iPad, look no further than the iCade

Being a child of the eighties, I have fond memories of the earliest years of video games. But the fondest of these would have to be the memories of my time spent in my local arcade. The art of the cabinets. The feel of the joystick. The warm glow from the machines that would bathe my face in light. It was magical. That’s why I decided it was time to finally sit down and try the iCade – a peripheral for the iPad from ION Audio that promised to recreate the magic of the arcade in the comfort of my own home.

Upon opening the box, I was a little surprised to discover that what had been delivered wasn’t an iCade at all, but iCade parts. The contents of the box felt less like a product by ION and more one by IKEA. Still, like IKEA, clear and wordless instructions came with the package, and after only a few turns of an Allen key I had myself a brand new bookshelf… err… iCade. It wasn’t a big deal, but I think it’s important to note that this is a product with some assembly required.

Once together, pairing my iPad to the iCade via Bluetooth was a cinch. Placing the iPad inside the cabinet, too, was a completely painless experience. The top of the cabinet flips up, allowing you to simply place the iPad into a small plastic cradle, where it will now sit for the duration of your iCade experience.

And that experience is glorious.

While at first glance the iCade might look like little more than a gimmicky peripheral for your iPad, I can assure you from the very bottom of my gamers’ heart that this thing is the real deal. The joystick has a natural resistance to it, just like the real thing should. The buttons, too, make that perfect clicking noise every time their pressed. The point is, these are real arcade components we’re talking about – not some cheapo “home version” type of build. And they go a long way towards recreating that classic arcade feel.

Over the last week, I’ve had a chance to go hands on with plenty of great iCade-enabled titles, and I can honestly say that they all feel more at home with the iCade than they do without. Games like Super Crate Box, League of Evil, and Forget-Me-Not seem like they were born for an arcade cabinet. Not only do many of this generation’s “endless” style of games feel like the modern descendants of classic quarter munchers, but the games just seem to control better on the iCade than they do on a touch screen. And none more so than Temple Run.

A brilliant game in its own right (read our five star review to find out why!), Temple Run has become the go to game in my house. We have a family of four under our roof, but if you were to guess by the way we’ve been acting, it’s less a home and more an arcade circa 1982. There have been times when we’ve honestly lined up to take turns playing this. I had even tried to put a quarter on top of the machine to call “next” once, but thanks to the angle of the cabinet it just slid right off.

Guiding your runner with the joystick? Holding left and right to grab coins, while pulling back hard to slide under the next tree trunk? It’s downright exhilarating.

In fact out of all the games we tested, the only one to fare poorly was – believe it or not – Pac-Man. Though the problem was less that of the iCade and more of the app itself. After five or six stages, the game started to chug and sputter terribly. A real disappointment when you think of how much fun a game like Pac-Man should be on something like this.

Well… maybe Pac-Man wasn’t the only problematic game. Dark Incursion has recently added iCade support, but for some reason it doesn’t allow you rotate the screen to portrait mode, so you’ll either need to take the iPad out of the cabinet or tilt your head 90 degress to play. That being said, the iCade has a nice little ledge for such a situation, but it doesn’t quite feel as comfortable as portrait. Asides from a few small hiccups like these, though, the entire catalog of games has played beautifully in our experience. 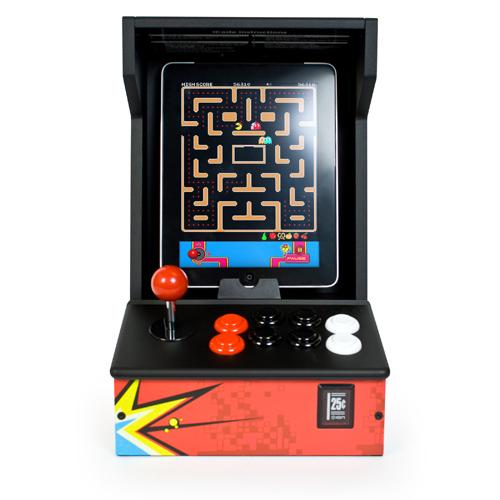 Of course no device is ever perfect, and the iCade is no exception. There are a few things happening under the hood that could have been handled better, but ultimately none detracted from the core of the experience. For one thing, the device is powered externally. Rather than drawing power from the iPad (as the competing Atari Arcade does), you’ll need to either use batteries or an AC adaptor. The catch? The AC adaptor isn’t included, and while the instructions say you can buy one on the ION Audio website, we couldn’t find one no matter how hard we tried.

Still – the batteries certainly last. We’ve put a good 20+ hours of gaming in with this thing so far, and the two AA’s still seem to be going strong. And so long as you invest in a pair of good recharagable batteries, powering your iCade can still be a one-time purchase, even without the adaptor.

As you’ve probably gathered by now, the iCade won’t act as a power docking station for your iPad either – at least not directly. The plastic cradle the iPad sits in has a pass-through hole, allowing you to plug in your existing iPad charging cable if you don’t want to drain your battery during a particularly lengthy gaming session. It’s a nice touch – but if it had come with an AC adaptor, we would have really felt that the iCade cheaped out on this potential feature.

Despite a few small niggling complaints that we’re hoping ION addresses in their upcoming iCade models, the iCade experience is everything we dreamed it could be. Since the iCade’s initial launch last year, plenty of developers have jumped on board to support it, with a whopping 70+ games now playable with the device (or 200+ if that’s how you look at compilations like Atari’s Greatest Hits). And we’re not talking 70 crummy games either. Titles that have earned top marks on Gamezebo, like Pix’n Love Rush, Hard Lines, and Forget-Me-Not are all playable on there.

If you’ve been as curious about the iCade as I was, but weren’t sure if it was worth the hefty price tag, I’ll make this real easy for you – buy it. This is the classic arcade experience you were hoping for.