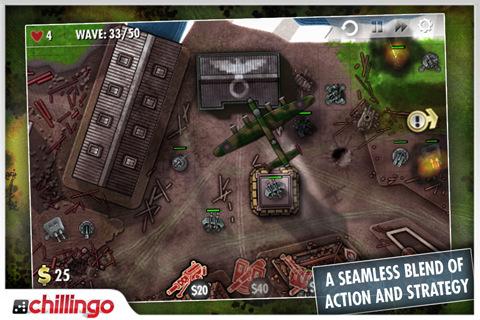 Whenever someone mentions World War II and tower defense, it’s hard not to think about the Maginot Line, the extensive line of defense that France laid down in case another aggressive nation (read: Germany and/or Italy) decided to invade. Of And while this didn’t work out too well for the French, it turns out that this strategy is still the best way to fight off the Axis Powers on your iPhone as demonstrated by iBomber Defense, a delightful new tower defense title set in World War II Europe.

Gameplay is pretty standard for the genre. You have to place defense/support units around a map grid in order to prevent Axis troops from destroying your base. Once you’ve placed a unit, you’ll have to keep it in good repair and gradually increase its level, which makes it more powerful.

You start off with two types of towers: machine gun and cannon. The machine gun turrets shoot a lot faster than the cannons, but the cannons pack a lot of punch when they fire. After each level you’ll be brought to a screen that lets you unlock other units, as well as increase their level caps. Eventually you’ll have a wide variety of units to choose from, including communication towers (which increase nearby guns’ firing range), sabotage posts (which slow down enemies as they pass), and anti-aircraft guns (which prove crucial later on thanks to the constant threat of enemy airwaves).

This is a great-looking game for the iPhone. The maps feature a variety of terrain types, including picturesque countrysides, rock-laden desert canyons, and island-peppered channels. The enemy units, too, feature a lot of detail and vary in appearance. This is something you’ll come to appreciate when you’re on wave 25 (out of, say, 30) and you’re still seeing new types of vehicles and soldiers racing towards your base.

After you’ve beaten any of the 22 levels, you can replay them in “Counterattack Mode”, which features different waves of enemies taking alternate routes than they did the first time you conquered the map. There’s also a rewind feature, which lets you start a particular wave over (instead of the entire level), but using this will force you to wait for a few waves before it can be activated again.

Sound, in turn, seems to have taken a back seat to the graphics. While you can play your own music as you play, the only soundtrack that seems to appear in the game itself is when the main menu is open. Other than that, the only audio comes in the form of occasional vehicle sound effects, gunfire, and explosions. These all sound fine, but there isn’t anything special them. 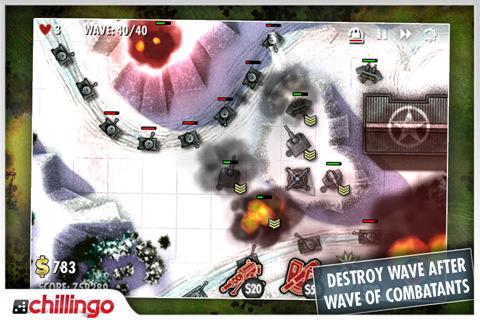 When it comes to level length, there’s a fine line between keeping it interesting and making it boring. While it certainly helps that you can fast-forward the action, later levels start to feel a little long in the tooth, especially when you start having to deal with stages consisting of 40 waves or so. Granted there’s still a lot of action on the screen and you’ll find yourself with plenty to do, but you might start to wish that the stage would just end already.

The only other issue with the game is that it seems to have problems registering a player’s touch. Even when you zoom all the way in on the map or are just dealing with menu items, it’ll sometimes take several taps before the game acknowledges what you want to do. It’s a bit frustrating, but not a major enough problem to cause a player to lose a game.

iBomber Defense manages to take two very overused things – the World War II setting and the tower defense genre -and stand out for all the right reasons. Not only is it fun and challenging, but it forces you to constantly adapt your strategies to meet those of your enemies. iBomber Defense s is a must-have for anyone who loves tower defense games.