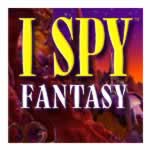 Many a car ride has gone by faster thanks to a guessing game that begins with the line “I spy with my little eye,” where one person chooses an object from the surrounding scenery and the other people have to try and guess what it is.

Children’s publisher Scholastic has taken this beloved time-passer and developed it into a series of books and interactive CD-ROM games – one of which is the downloadable I Spy Fantasy.

Like the guessing game on which it was based, I Spy Fantasy challenges the player’s powers of observation by showing them a scene cluttered with various objects and giving them a list of specific items to find by clicking on them with the mouse.

That’s the gist of I Spy Fantasy, but the game is actually much richer than this initial description would suggest. For example, instead of a simple laundry-list of items to find in each scene, the items are presented as riddles to decipher. A typical riddle goes like this:

There are three different adventures with a total of 30 locations to explore, all of which are tied together by the common theme of a child’s imagination. A bucket of beach sand and toy soldiers form the basis of the medieval-themed Sand Castle adventure; a model rocket and hanging mobile of the solar system inspire the sci-fi-themed Blast Off, and a fish tank is the inspiration for the oceanic adventure Deep Blue Sea.

As players identify all of the objects in each scene, they’ll be awarded items to use towards completing the storyline of the adventure. For example, in Sand Castle, players must rescue the princess by finding the six keys that unlock the dungeon gate. Once the gate is unlocked, they’ll have to defeat the dragon guarding the princess by brewing a potion made with additional items scattered throughout the castle.

A few of the puzzles also require the player to drag objects into the right place, use a flashlight to investigate a darkened cave, and use a microscope to magnify an area.

Once a storyline has been completed, it can be played again at a greater level of difficulty with new riddles and different items to find. (There are three levels of difficulty in all.) Increased difficulty means that there will be more items to find in each scene, and the riddles will be more abstract. For example, players might be asked to find “8 wings,” where wings could belong to dragons, butterflies, bats or birds.

Those looking for a laid back gaming experience will appreciate the fact that there’s no time limit to solving the adventures. Players can ponder and scrutinize for as long as they like, leave a scene and come back to it, and jump in and out of any of the three adventures. Players also aren’t penalized for clicking in the wrong place.

So where’s the challenge, you ask? There are NO hints in the game whatsoever – so don’t expect to be able to click on a “help” icon and be led straight to that hard-to-find item. Thankfully, the scenes don’t have to be completed in any sequential order so if you get stuck on something you can move on to something else and come back later with a fresh set of eyes.

It’s obvious that a lot of care and attention has gone into the making of I Spy Fantasy. It’s a playful, relaxed game that offers more of an intellectual challenge than Hidden Expedition: Titanic, Paparazzi and other games of a similar ilk. Playful animations, voice-overs and musical ditties round out an impressive package (although I could have done with a “skip” function, because as great as the animation and music is, it does eventually get repetitive).

I shudder to use the word “edutainment,” but it’s an apt description of the kind of vibe I Spy Fantasy puts off. Go and download it – you’ll have fun and probably feel smarter too!