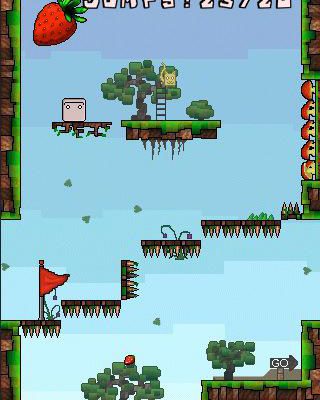 It’s hard to know what to expect from a game called I Love Strawberries. But you definitely won’t expect this. What at first appears to be a cute and charming puzzle game, quickly reveals itself to be deceptively difficult and surprisingly violent. It’s fun and challenging and will make you want to throw your phone across the room. All for the love of strawberries.

The game stars box boy, a little box with an expressive face who loves strawberries. He loves them so much he’s willing to die to get them. Each stage is littered with plenty of the tasty berries, including one giant juicy one at the end. And that’s your goal. You’ll be navigating through each stage in an attempt to reach that delectably large strawberry at the end. Along the way you can collect smaller berries and you’ll have to navigate perilous jumps, pits of dangerous spikes and lava, moving platforms, and more. 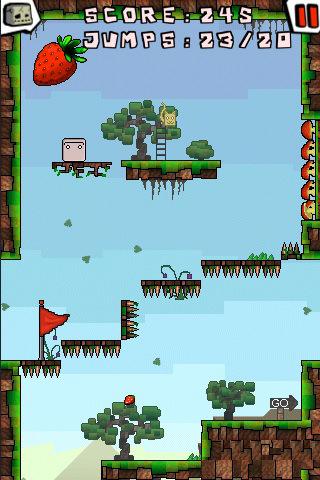 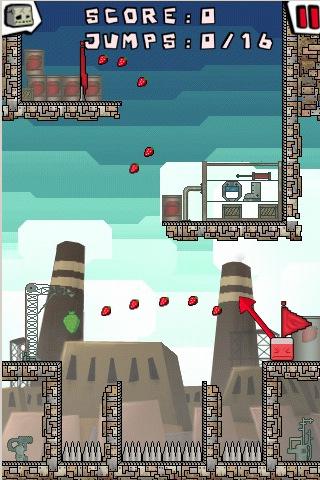 Controlling box boy requires a combination of tilt and touch controls. All he can do is jump and it’s your job to determine the direction and power with which he jumps. Direction is controlled by tilting the device, while power is controlled by holding down your finger. This will cause box boy to slowly turn red. The redder he is, the farther you’ll jump. It takes a little while to get the hang of the controls, and many of the stages require some precise jumping. There are narrow openings to squeeze through and even bouncy walls to bounce off of. It may look cute, but this game is hard.

At the end of each stage you’ll be given a score which is based on a variety of factors, including how many little berries you manage to collect and how many jumps it takes you to reach the end. The fewer the number of jumps, the higher the score. Since the game is so difficult, getting a perfect or even really good score will take plenty of attempts for most players. This gives the game quite a bit of replayability, as you can replay each level in an attempt to best your previous score.

Contrasting the difficulty level is the game’s visuals. I Love Strawberries sports a disturbingly cute pixel art style. It’s disturbing because even though everything is so cute, the game is quite violent. Box boy gets impaled on spikes, burned by lava, and his numerous facial expressions will let you know just how much pain he is in. There’s also a good amount of variety to the bright and colorful visuals, ranging from a lovely forest to an arctic wonderland.

If you can get past the difficulty level, there’s a lot to, um, love about I Love Strawberries. The controls make great use of the platform; the visuals are bright, cheery, and delightfully violent; and there are lots of levels to play through and plenty of replayability. It’s the kind of puzzle game that doles out the punishment steadily, but is so solidly designed that you’ll keep coming back for more. Box boy may be a glutton for strawberries, but this game will make you a glutton for punishment.