I am MT: Card Battle Review 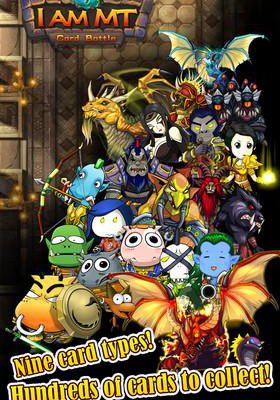 It’s difficult to get excited about licensed games, even when they belong to a proven genre. Not being familiar with the source material doesn’t help, either. Yet, despite my lack of I am MT knowledge, I’ve found myself enjoying I am MT: Card Battle quite a bit.

The cartoon itself is difficult to explain. It’s popular overseas in the East but hasn’t made its way stateside yet; although that may have something to do with the liberal use of World of Warcraft-inspired everything. Blizzard’s unstoppable MMO isn’t the only place it takes “inspiration” from, either. Aside from a few minor differences like combat and the actual depiction of cards, I am MT also makes use of a common framework found in games like Puzzle and Dragons and Angel Salvation. Players must gather warriors through summoning (which requires limited resources) or as quest rewards; upgrade and evolve them; and then find a place for them in their team’s formation. 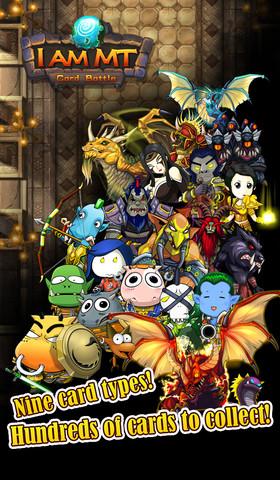 At the start of each quest it’s also possible to recruit other players’ leader cards for some assistance. Combat, on the other hand, is totally automatic. Aside from being able to adjust formations in-between fights, players have zero control over their troops. Instead they just sit back and watch them throw down. Depending on a team’s construction, levels, and individual abilities, it can make for quite the light show. Once the smoke has cleared and any potential winnings have been gathered, then it’s time to upgrade or reconfigure as necessary and take on even more challenging quests.

I’m of the opinion that there’s a very good reason these progression mechanics have been copied in dozens of iOS games: it’s a system that works incredibly well. Strengthening cards – of which there are several hundred – is quick, easy, and satisfying. Especially when it involves creating a super-powered rare card that does more than five times the damage of any other card in the line-up. 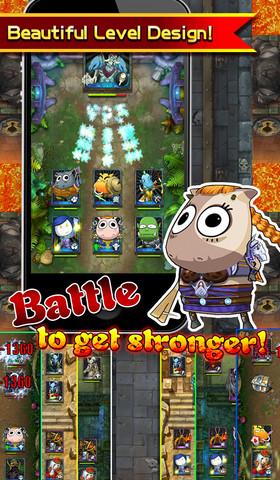 The lack of any sort of interaction during the combat, on the other hand, is a bit of a double-edged sword. It means players aren’t doing anything but watching the screen and occasionally tapping it to prevent their device’s sleep mode from kicking in; but it also removes any possibility of stress over missed inputs or poor reaction time. Plus it can be ideal for situations where players can only look at the screen for a few seconds at a time, like in the middle of a boring lecture or something. (NOTE: Gamezebo does not condone classroom delinquency. Stay in school kids!)

Even though I am MT’s liberally borrowed CCG system works well, it’s still something many iOS users have seen before – possibly dozens of times. And if someone’s played games like it a lot before, chances are they won’t have much interest in repeating the experience yet again. At the same time it’s also possible that the lack of any real combat will be a major turn-off. It didn’t particularly bother me in this instance, but it’s definitely something for action-loving iOS gamers to keep in mind. 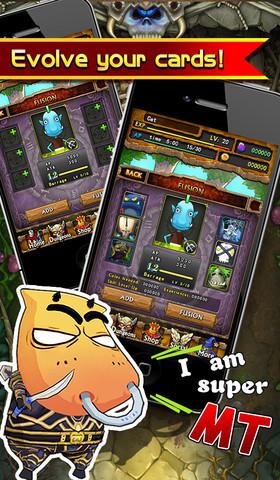 I am MT: Card Battle has been kind of tough for me to pin down. It’s nothing new in any real sense, but at the same time it’s still fun to gather and upgrade new cards. There’s no real action to speak of, but that frees players up to simply enjoy the aesthetics and flashy effects. I think I’d recommend it to people who are unfamiliar with Puzzle and Dragons-type experiences, but anyone who’s already well versed in the mechanics might want to pass.