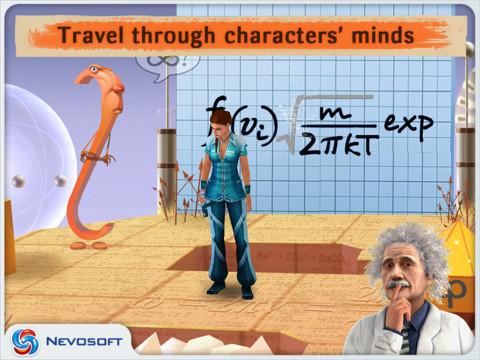 Stare into the light and count backwards from 10.

Have you ever been hypnotized before? It seems a little scary at first, but it’s also a proven psychiatric method of bringing all those inner demons to light, and working through any hidden issues you may have. Well Maya, the psychiatrist heroine of Hypnosis, swears by this method, and she’s prepared to use it every chance that she gets to investigate the mysterious disappearance of her colleague and ex-boyfriend, Dr. Blanche, in this dreamy and hypnotic point-and-click adventure.

After an abrupt beginning, players are thrown into the constant dream world of Hypnosis, as Maya floats through time and space in a detached streetcar from her own murky past. The basic progression of gameplay involves Maya interviewing a number of psychiatric patients, who have all been seeing troubling visions and may hold some answers to the disappearance of Dr. Blanche. The story is the strongest part of Hypnosis, although it can seem a little ridiculous at times, with this scantily clad and renowned psychiatrist hypnotizing people on the spot with her magic flashlight, and the patients being entirely willing to let this stranger into their minds. But if you can look past the small bits of unintentional humor, there is actually a really deep and riveting narrative to be told here, and it always had me on the edge of my seat to see how the new and surprising plot points would unfold.

The graphics are impressive for an iOS release, and each character is defined by their own unique characteristics, like Maya’s different colored blue and green eyes, or kooky Professor Einbock’s eerie resemblance to Albert Einstein. Each character has a number of suppressed issues that you will help resolve by adventuring through their minds, such as “No one loves me” or “Unhappy childhood.” The different dream segments give way to some really great moments, and allow the developers to experiment with all sorts of visual art styles, which largely work in this dreamlike context. You’ll explore the childlike memories of an 18 year-old Goth girl by hopping through her paintings one minute, and watch the transformation of an Indian reservation into a bustling city the next.

As far as point-and-click adventure games go, Hypnosis is probably among the easiest I’ve ever played. This is mostly because each consciousness you enter is completely self-contained, and you will always use every item available before moving onto the next area. The game always points you in the right direction, and highlights every single object you can interact with in the world, which sort of dashes the whole emphasis on exploration in point-and-click adventure games. The interconnected hub world is also completely devoid of exploration puzzles and feels completely underutilized, as it merely serves as a means to get you from one character to the next in the short time you’ll spend there.

But the biggest misstep here in Hypnosis is the game’s awkward and unneeded battle system. As you travel through each character’s consciousness, you’ll encounter a number of their innermost Phobias, which are represented by “evil little people” in scary masks, who scamper around wreaking havoc. The Phobia creatures really upset the calming nature of the rest of the game, as a jarring and startling cinematic plays every time one of them bursts out of a window or scampers in from the shadows. The actual battling system is pretty mundane, and interrupts the flow of gameplay at every turn. The battle screen features a handful of orbs, each belonging to either Maya or the Phobia, and a number designation at the bottom that denotes each orb’s respective value. All you have to do is transfer your number of orb points to the other orbs on the screen to take over the Phobia’s pieces and emerge victorious.

The game throws some new elements into the mix the more battles you encounter, to give them a more one-off puzzle quality, but they only make matters more complicated and even less fun. Thankfully, after the first few battles, you have the option to skip every one for the remainder of the game, or you can replay them all from the main menu screen if you really have nothing better to do. 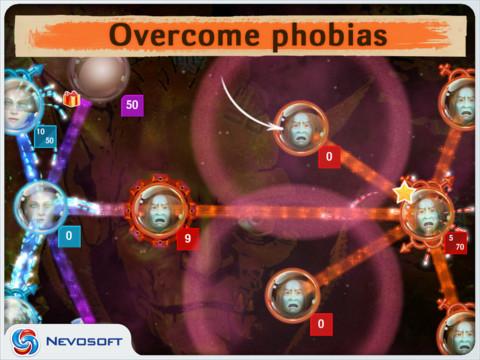 The green crystals you earn from defeating Phobias are also wasted potential, as besides hints and the occasional power-up to help you during battle, the only thing you can buy in the store are two alternative outfits (which are so revealing that they could make even Lara Croft blush.)

The game never gets too difficult that you’ll ever need a hint, and the length of the adventure is also fairly short: so much so, that one in-game achievement rewards you for completing the entire game 10 times over.

Hypnosis brings an entrancing story about the inner demons inside of us, and the game’s presentation is put together nicely with gorgeous visuals, and serene and dreamy environments. But the adventuring segments are a little too simple, and the game’s extra padding in the form of battles with Phobias does more to hurt the experience than make the game more lasting and enjoyable. While Hypnosis does its best to wake you up from your nightmares, there are still a few features here that should have stayed sleeping.