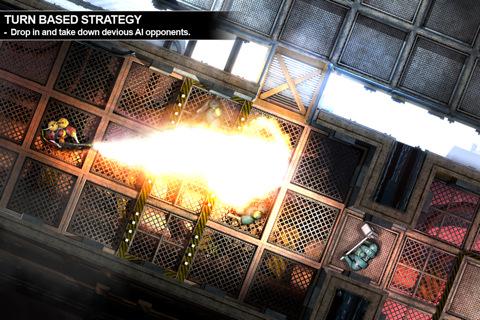 Hunters: Episode One puts you in command of a team of mercenaries …in space!

Are you sick and tired of your boring 9-5 job at the office cubicle? Do you wish that you could use some high-powered firearms to work through those pesky anger issues? Do you look sexy in space armor? Then may I suggest that you join up with your local branch of interstellar mercenaries? The pay is great, the hours are reasonable, and – if Hunters: Episode One is any evidence – mowing down your enemies can be incredibly therapeutic.

Hunters: Episode One is a top-down, turn-based strategy RPG. It reminded me a bit of games like Shadow Watch and X-COM. Players control a squad of mercenaries as they conduct different missions on various planets. Maps are covered by square grids, and characters only have so many action points to use each turn. These points can be used to move a certain number of grid squares and/or perform actions (such as attacking that sucker who’s got his back turned towards your squad).

There isn’t much of a story here… yet. The game is set in a universe where humanity has colonized numerous solar systems and corporations often own planets. As a result, mercenaries are often hired to get their hands dirty on behalf of their corporate overlords. Players head up a team of hired guns who conduct various black ops, building them up to become one of the most formidable groups in the known galaxy. Unfortunately there’s no single-player storyline, though Rodeo Games will supposedly be providing story missions in the near future.

When a mission’s completed, players earn cash, gear, and experience points that can be used to upgrade the team. If salvaged equipment isn’t up to snuff, it can be sold in the game’s market, and other gear can purchased from a constantly-updating inventory system.

For the most part, the game plays as well as any PC title in the same genre. The touch interface is incredibly easy to grasp (thanks to a solid tutorial at the start of the game) and works really well. Combat and controls generally work fine, but there are a couple of issues. For example, player-controlled characters can’t move past one another on the same square, which is incredibly frustrating.

There’s also an occasional bug where the game will crash when it tried to load levels or gift items delivered from viewing the in-game advertising. Finally, there’s an occasional glitch where issuing orders wouldn’t be executed, though this only presented itself twice and was solved when the game was quit and restarted. 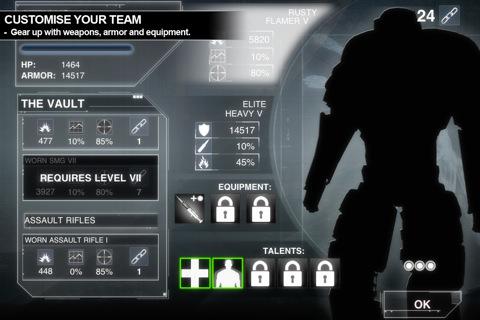 Visually, Hunters works just fine. The environments look great, as do the various menus. The character models, in turn, seem a little fuzzy, but they move well and animate well. This was much more obvious on the iPad screen, since there was a larger image to look at. On the iPhone’s screen, the game looks pretty spectacular. The audio, too, is well-done, but didn’t really stand out as anything overly amazing.

The coolest part of the game, though, is how missions are delivered. Each day, Rodeo Games releases a series of new contracts that players have 24 hours to complete before they go away. These missions can be re-played as often as one would like to during this timeframe, meaning that players can continue earning cash and experience. This is a pretty creative way to keep content fresh, and it certainly ups the game’s replay value.

Overall, Hunters: Episode One is a good title that’s on the verge of being absolutely great. Aside from needing some bugs fixed, the game could also use some story missions to provide a solid narrative that players can get behind.

The Serpent of Isis: Your Journey Continues Review