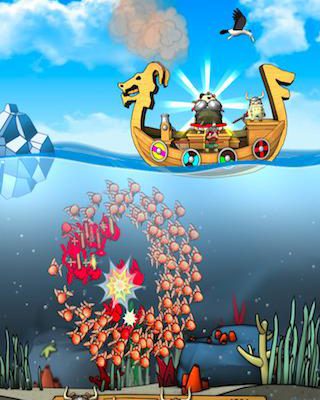 Hungry Helga’s got the need to feed.

Sometimes feeding a hungry lady can be a full time job. Take Helga, for instance. Helga loves fish – and if she doesn’t get enough, she’s liable to split her ship in two. It’s up to one brave soul to make sure she stays satiated, and if you’re up to the challenge, that brave soul could be you.

Hungry Helga is a simple casual offering about catching fish and feeding them to the insatiable Helga. You see, Helga’s got a mean case of the munchies. To feed her, players will need to tap on a school of fish below to rain destruction down upon them. As their little fishy bodies rise to the surface, players will tilt their boat so that a Viking with a net can scoop up the fish and fling them into Helga’s mouth.

Each level plays out the same, with the stage coming to a close after all of the fish have been killed. Along the bottom of the screen is a meter that shows Helga’s hunger. If she shrinks too much she’ll throw a temper tantrum that will end up with a smashed Viking Ship sinking to the bottom of the sea, complete with her Norse crew, ending the game. Add into the mix some cool super powers that change from level to level that Helga can unleash when fully fed, and you’ve got the Hungry Helga experience in a nutshell. 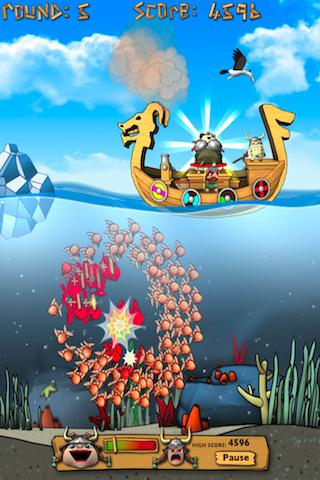 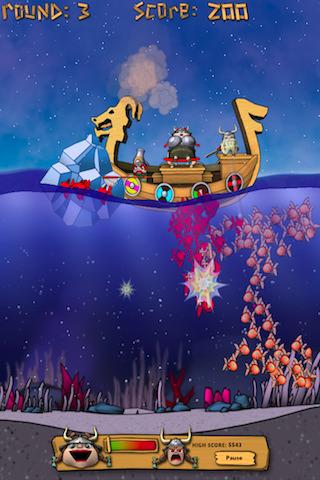 While an interesting premise, the actual gameplay is just a little too basic to be engaging. Tap on targets and tilt to collect the dead fish. Lather, rinse, repeat. Little twists get introduced the longer you play, such as sharks and seagulls who have the same taste in chum as Helga, or icebergs floating in from off-screen that prevent you from tilting your ship fully to the left or right – but these do little to break up the repetitiveness of the experience.

Still, that’s not to say that Hungry Helga is a bad game. If you don’t mind the repetition, the game can offer up a pretty steep level of challenge the longer you survive. And the presentation offers a great deal of personality – especially on the iPad where the characters and set pieces appear large enough to really impress. Character animations, such as when Helga shrinks and gets angrier, are outstanding. The music is equally as accomplished, offering a catchy tune that captures a cheerful Viking vibe. The presentation is doubly impressive when you realize that the entire Hungry Helga experience was created by a single independent developer.

As a simple pick up and play experience, Hungry Helga has its charms – but with gameplay that remains basic and unchanged throughout, things can grow dull a little too quickly. While we liked both the presentation and premise, the gameplay needed to cook a little longer to find that addictive hook that games like this need. Hungry Helga is a competent casual offering – but there’s simply not enough here to make this a fish worth catching.