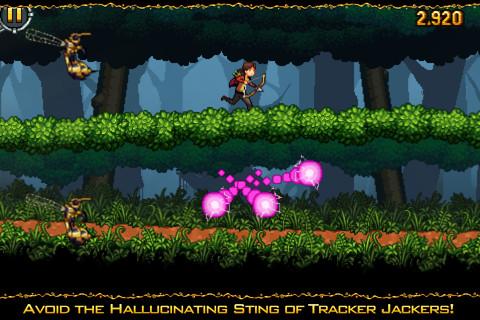 Girl on Fire looks amazing, but leaves you hungry for more

The Hunger Games: Girl on Fire has a lot going for it. For starters, it has the established universe of the already beloved Hunger Games franchise, including three novels and what’s very soon to be a successful trio of films. It’s made by the creator of Canabalt, and also contains the fantastic musical scores of Danny Baronowsky and visuals of Super Crate Box‘s Vlambeer. Yet, despite this “dream team” of indie developers, Girl on Fire left a lot to be desired.

Not too surprisingly, the story has very little to do with the plot of the film. Fans of the series might find this disappointing, but it also doesn’t exclude non-fans from picking up on the action. You play as expert archer Katniss Everdeen, sprinting through the woods outside District 12 as you pick off an onslaught of tracker jackers (killer bees) with your bow.

Controls are left to the user to discover (there is no tutorial), but remain fairly simple. Katniss runs on two heights of land, and an upward or downward flick alternates which level she runs on. Constantly jumping and dropping through different heights allows you weave through a sea of projectiles without getting hit. Tapping outside of Katniss’ body in any direction fires an arrow, which is your sole source of combat for the onslaught of killer bees. Get hit once by a tracker jacker, and your screen will become blue and disoriented. Get stung a second time during this timeframe, and your game is over.

If there’s one thing Girl on Fire retains from its developer’s prestigious backgrounds, it’s the presentation. The 16-bit style graphics are colorful and attractive, even when flying by you in a progressive blur as speed increases. Danny Baronowsky’s soundtrack is catchy and exciting, perfect for creating a sense of tension while you play. At its best, Girl on Fire is an exciting sidescroller.

At its worst, however, it stumbles. For starters, the controls aren’t perfect: it’s occasionally difficult for the game to determine whether you wanted to change heights or shoot an arrow. Because the game is fairly challenging from the get-go, one wrong read of the controls can mean an early end to your run. Even without the occasional control slip-ups, the high difficulty is likely to turn a few players away.

And speaking of an end to your run, it’s Girl on Fire‘s limited run time that prevents it from achieving any replay value. After a few minutes of weaving through tracker jackers in the forest (around the score of 15,000 to 23,000), you’re greeted with a “boss” stage. Once you’ve dodged a few tricky electrical traps, your adventure is over and you’re greeted with the credits. This removes any real motivation for trying to achieve a high score, because you’re no longer competing to see how long you can endure. If you’ve completed the fairly short game, you’ve seen everything it has to offer.

It’s clear that The Hunger Games: Girl on Fire is an advertisement for the film, which is very likely the reason you can pick it up for free. However even with the occasionally negative stigma associated with free advertising apps, it’s hard not to feel a little let down with this one. The developers have great history, the presentation is exceptional, and gameplay can be intense. It offers no more than half an hour of gameplay, which will likely be the time it takes you to complete the game or give up on it in frustration. With zero replay value, we can’t help but feel it’s a shame that the adventure is cut off so soon.