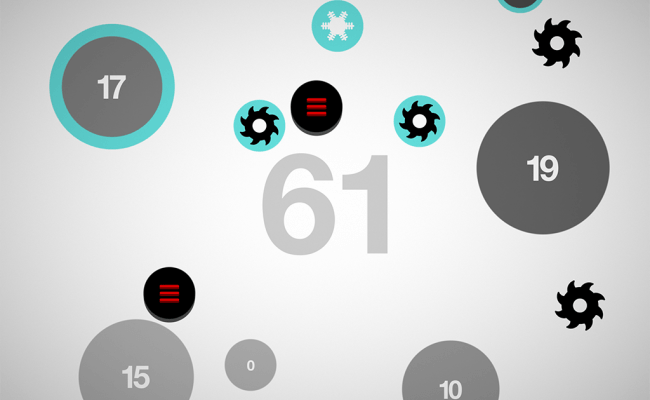 A whole different kind of adventure in space

If you play games on a phone or tablet, you’d be hard pressed not to have heard of Adam Saltsman’s Canabalt. The iconic endless runner was recently admitted to New York’s Museum of Modern Art as a poster-child for bite-sized play. If Canabalt is a reflection of app gaming’s origins, then it’s arguable that Saltsman’s latest project – Hundreds – is a snapshot of where it’s at today.

A collaboration between Saltsman’s indie outfit Semi Secret Software and developer Greg Wohlwend (Puzzlejuice, Gasketball), Hundreds has a seemingly straightforward mission: reach 100 in every level by enlarging moving, numbered circles on the screen. The catch (there’s always a catch!) is that while a circle is being touched, it turns red; let anything red make contact with another part of the environment, and you’re doomed to start the process all over again. Succeed, and you live to face a growing menagerie of obstacle in other levels, including bubble-freezing snowflakes, dangerous blades that zero-out your hard earned count, and permanently red circles that must be avoided at all costs.

The first thing that stands out about Hundreds are the instructions: namely, the fact that there are none. Both punishment and reward are the result of doing, from the initial discovery of a level’s win condition to interaction with new threats and abilities. Quickly, what could have been a standard iOS puzzler becomes an evocative, tactile experience. Mistakes resonate deeper, discoveries feel more exciting, and nothing ever grows stale.

That sentiment applies to Hundreds as a whole. Moving from sparse screens, through volatile levels filled with razors, and into crowded environments with more numbers than white space, the game is constantly presenting new ways for players to consider space and how to interact with it. Inside the game’s hundred levels (as if it would be any other number) is the kind of nascent strategy belonging to the best thought-provoking games and toys. That sense of betterment-by-osmosis, where you don’t so much develop technique as let it seep into your bones, until you instinctively known when to tap with gusto, and when to tread lightly until victory is in sight.

Far and away, the personal highlight of Hundreds for me is what I’ve dubbed to be its ‘secret multiplayer mode.’ The truth, never spoken anywhere in the game, that every individual level is better with someone else sharing the iPad screen. Silently frustrating trials by fire turn into spirited shouting matches between you and a friend, debating whose fault it was that your 60 point circle got hit by a razor. The few nasty later levels that could be argued to be more based on luck than skill are instead party centrepieces perfectly suited to six hands, multi-touch mayhem, and lots of laughter. Saltsman and Co. – without sacrificing any of the game’s appeal to the solitary puzzle fan – have designed a game that deserves to sit alongside Joust as a must-have at events, conferences, and get-togethers. A testament to the value of playing together. Like, really together. 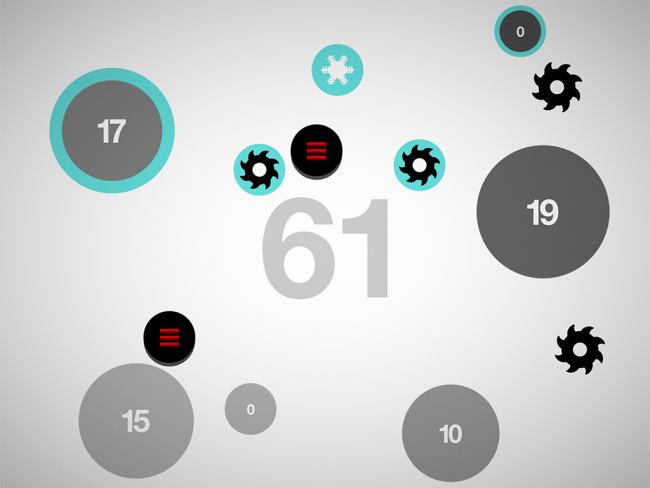 Not to go unmentioned is Wohlwend’s deft, perfectly complementary visual direction. Using a simple color palette of red, white, and black, Wohlwend handily proves why he’s one of mobile’s most in-demand artistic talents. Hundreds’ mathematical level summaries, calculated flourishes of color, and uncompromising cleanliness give it a scientific sterility brimming with a sense of mystery lingering beneath the surface. Speaking of which, how about those mysterious ciphers? Doled out as rewards for completing batches of levels, each is a string of letters (and later symbols) that hides mysterious adages which give shades of a plot to the game. All at once completely unnecessary and wholly absorbing, they’re yet another sign that Hundreds is of a mold all its own.

In the same way I found myself championing Botanicula as Game of the Year as 2012 ended, lamenting early releases for getting lost in the fray, I can see this game coming along for the ride in 2013. Full of nuance, depth, and innovation, this is easily the year’s first must-play title. Fitting I suppose, that it also earns a hearty 100%.