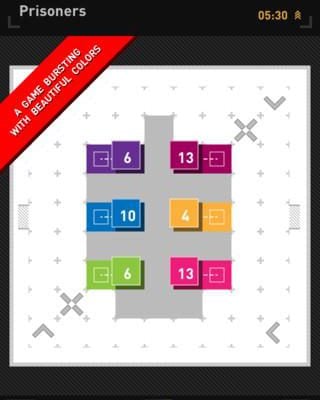 Gloating. Hubris. Pride. It goes by many names, but proves equally annoying in the wrong hands. And nothing spurs it on like proficiency at video games. The smug smiles watching others struggle. The “humble brags” casually mentioning achievements and records. Well if you happen to be a brain teaser fan that knows – or worse, is – a particularly prideful puzzle gamer, I’m happy to tell you that there’s an app for that: its name is Huebrix.

Oh, don’t get me wrong, the self-satisfied solver will likely look at this game, without its multitudinous moving parts, and assume simplicity. And to a degree, they’d be right. After all, the goal in Huebrix is patently easy: trace outward from one or more colored blocks to fill the entirety of a white square with different hues. Pay attention to the numbers on each block, as they determine how many spaces you can color before that hub runs out of steam. From there, it’s all about filling in grids by making sure all your ‘paint’ is used, with no square left blank.

Yet what appears at first to be a case of paint by numbers is more devilishly like the classic cell phone game Snake, if it were combined with a 2D interlocking block puzzle. A game that juxtaposes visual and mechanical openness – you can trace lines almost anywhere – with calculated constraints: there is only one solution to each puzzle. In this way, the game forces choice paralysis on players, asking them to consider all their options at once, while mining each level’s blank slate for the perfect answer.

Far from throwing you out in the wilderness, though, Huebrix – like those block puzzles – is all about incrimental discovery. As you draw the right paths, the remaining visual space becomes easier to navigate, making it much clearer where remaining color streams could fit. To this end, the numbers play extreme significance, and the game offers a wonderful lightbulb moment when you begin to understand how much can be deciphered by using each limit together to determine what has to be done. If I draw three green squares here, it will be impossible to connect nine blue ones there, so the green line clearly has to go… 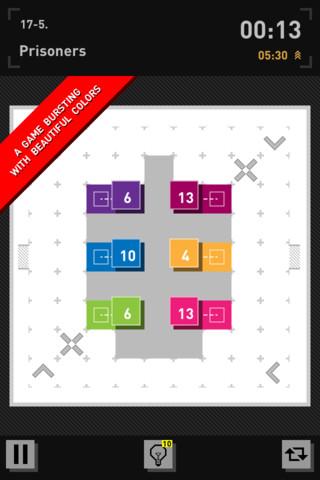 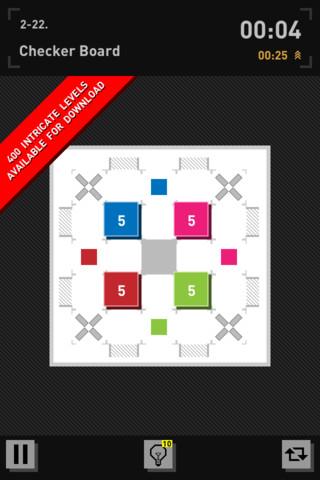 As I play, I’m reminded of an interview I had with the mental mixologists at independent studio Kieffer Bros. – puzzle masters in their own right and designers of games like Aqueduct and Blockwick. Asked what defines the perfect puzzle, lead designer David put it succinctly:

“You know exactly what the end objective is. It looks impossible, but you see a small, simple first step. When you take that first step, suddenly a second step emerges, one that you couldn’t see before. Then before you know it, a path begins to materialize.” Almost to a tee, Huebrix manages to create this atmosphere. Of course, it obscures it in an extremely steady difficulty curve, which – even in the “starter” class levels – runs just far enough ahead of what you’ve mastered to ensure each level keeps you humble. As a result, the game feels like the best kind of difficult, where your inadequacy can’t be blamed on the game, and where victory comes in the form of short lived moments between one stumper and the next.

Part of what keeps the game so fresh also comes down to Yellow Monkey Studio’s clever implementation of new mechanics as you play. Arrows that force you to draw colors in one direction, “X” marks that indicate insurmountable stopping points, symbols that add and take away from your hubs’ totals, portals that transport you – Pac-Man style – to the other side of the grid. All of it is added with an indifferent lack of explanation, and you’re simply expected to keep up and add it to your puzzling vernacular. Risky, perhaps, but there’s no better learning experience than the doing of something, and one encounter with each new mechanic proves to be enough of a “tutorial” to understand it, leaving you to add it to your mental search for that needle in the haystack. If I draw three green squares here – but I can’t, because that down arrow will back me into a corner…

And none of this is to consider the implications of the game’s three-medal system, which demands not only your brain, but your brain in hyperdrive, awarding you higher “medal” status for faster completion time. Arguably, by constraining higher honors to time, the game puts itself at odds with some of the more difficult puzzles, which can’t possibly be solved on the first go in time for a gold. The result can sometimes feel like Huebrix is trying to add artificial longevity by forcing you to go back and play a game of memory. 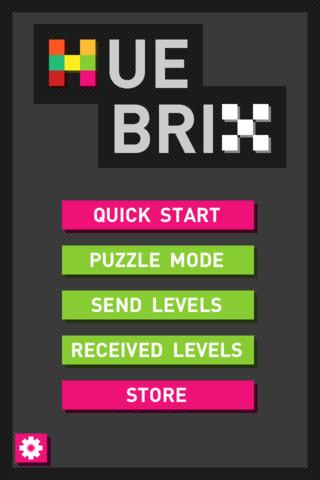 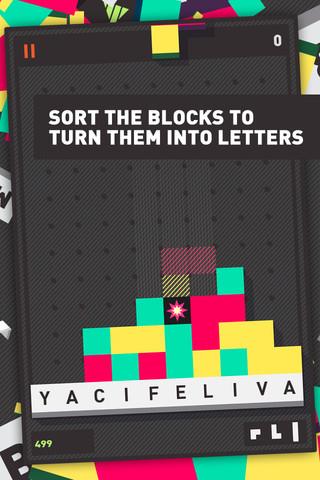 Like Blockwick mentioned earlier, Huebrix also offers real longevity with an in-app payment system which feels earnest and flexible, allowing you to purchase extra level packs and control their difficulty. Love the game, but not enjoying how hard it’s gotten at the upper levels? Avoid the hard or insane packs and stick with the medium option. With each of the 17 packs costing 0.99 cents, it’s arguable that Yellow Monkey is being a little aggressive for completionists, but this is a game that is easily worth 20 dollars over the course of a year for fans of the genre. And that’s just the tipping point, when you stumble upon the game’s free-form level creator which allows you to send and receive devious challenges to and from Game Center friends. Think of it as your one stop shop for brain bending.

Perhaps the only misstep here is the game’s own sense of hubris. Its audacity to believe it could get away with what appears to be an obvious cribbing of the color-packed, minimalist aesthetic seen in this year’s indie hit Puzzlejuice. Certainly, no one owns the right to a look, but put them side by side, and Huebrix often feels like it is trading in on the former’s image so as to confuse app gamers into thinking there’s an association…something that speaks ill of the creative masterminding done everywhere else in the app.

With that said, Huebrix’s sins are far from great enough to sink it, as its original gameplay, bold difficulty, long term expansion potential, and dedication to hardcore puzzling help it rise above not only its poorer decisions, but feel like a great one for any fan of the genre. Especially those in need of a little humility.