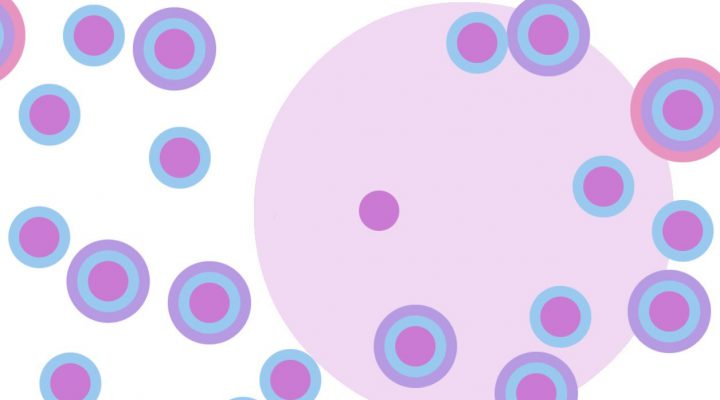 With no actual levels or difficulty progression beyond skill, enjoyment may possibly wear out over time. Possibly.

When I began coding over ten years ago, the very first thing I learned how to utilize was x=x+ 1. This simple but foundational equation would make a ball move across a screen (or “stage,” as we called it then) from left to right and disappear past the edge. The second thing I learned was to turn that ball around when it hit the edge and let it keep bouncing from side to side to side within my little stage; that was my first real code victory and one I’ve never forgotten. There is a simple gratifying joy in moving a pixel ball across a screen and controlling how fast and what direction it goes; we’ve known this since Pong.

Hue Ball takes that simple joy and elevates it to a beautiful meditative experience. It uses a bubble-shooter mechanic where you increase your high score by removing as many colored static balls as possible before they pile up. Aim the shooter into the array of static balls, shoot, and if you make contact, the ball will pop and disappear. If you miss, the ball you shot will slow down and stay in one place. Every few seconds, a color fills the screen and each individual static ball expands to include a new ring of that color. With each successive ring, the static balls are harder and harder to entirely remove until they become permanent obstacles in the form of skulls. You can earn extra points and health from ricochet combos but if ever a shot ball crosses back behind your shooting line, you’ll lose health. 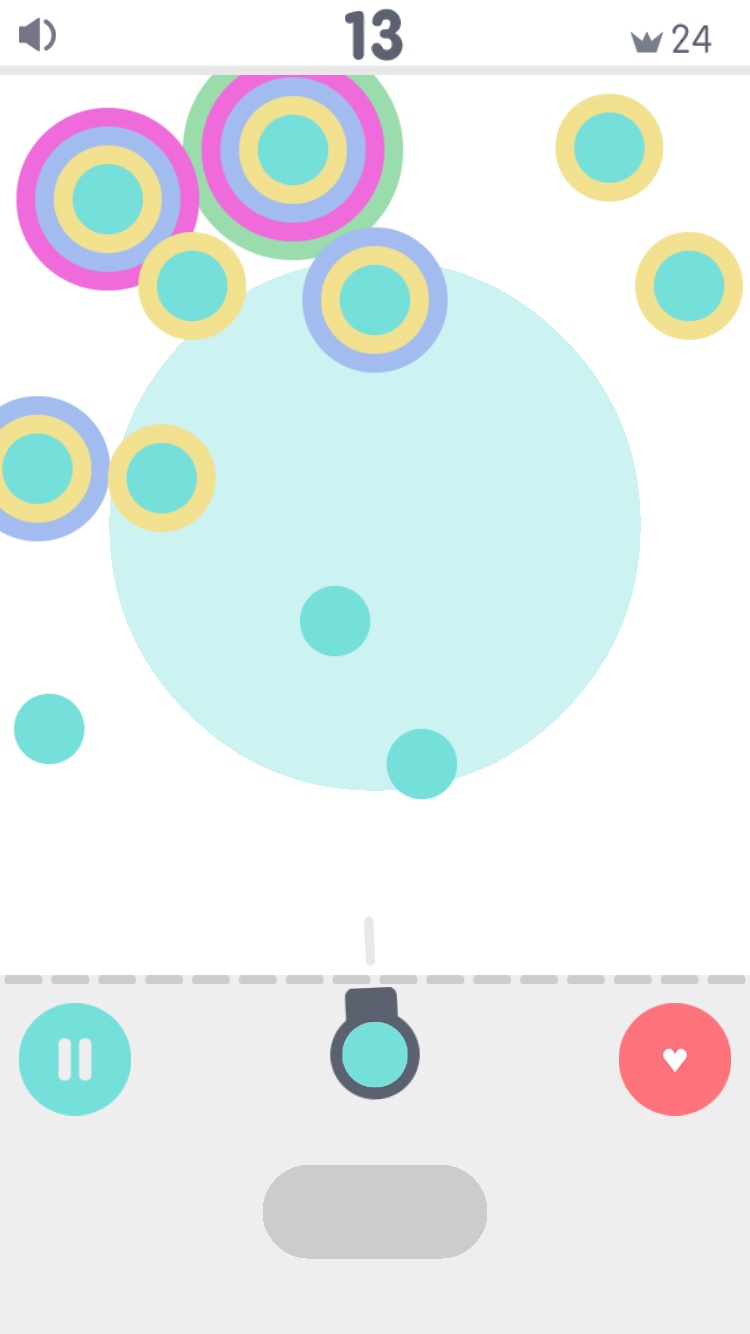 This explanation is far more complicated than the gameplay itself. As soon as you intuitively shoot your first Hue Ball, you’ll immediately feel the simple gratifying joy of moving those pixels. This is also no ordinary bubble-shooting experience. Hue Ball eschews shiny saccharine cartoon aesthetics in lieu of a flat tonal look, similar to Dots. It is fresh, modern and becomes more beautiful the longer you play. And speaking of tones, the perfectly unified relationship between the music and visuals is almost synesthetic. The soundtrack is a mellow synthy mix that doesn’t feel repetitive or tedious.

Though Hue Ball has a Zen feel to it, the intensity does increase as you progress making it just as fun as it is beautiful. The difficulty ramp is reasonable, unlike distant Flappy or Springy high-score cousins. Part of this is because the difficulty is mostly organic and based entirely on your decision-making.  You’re also only playing against yourself, unless you’re inspired by the leaderboard. 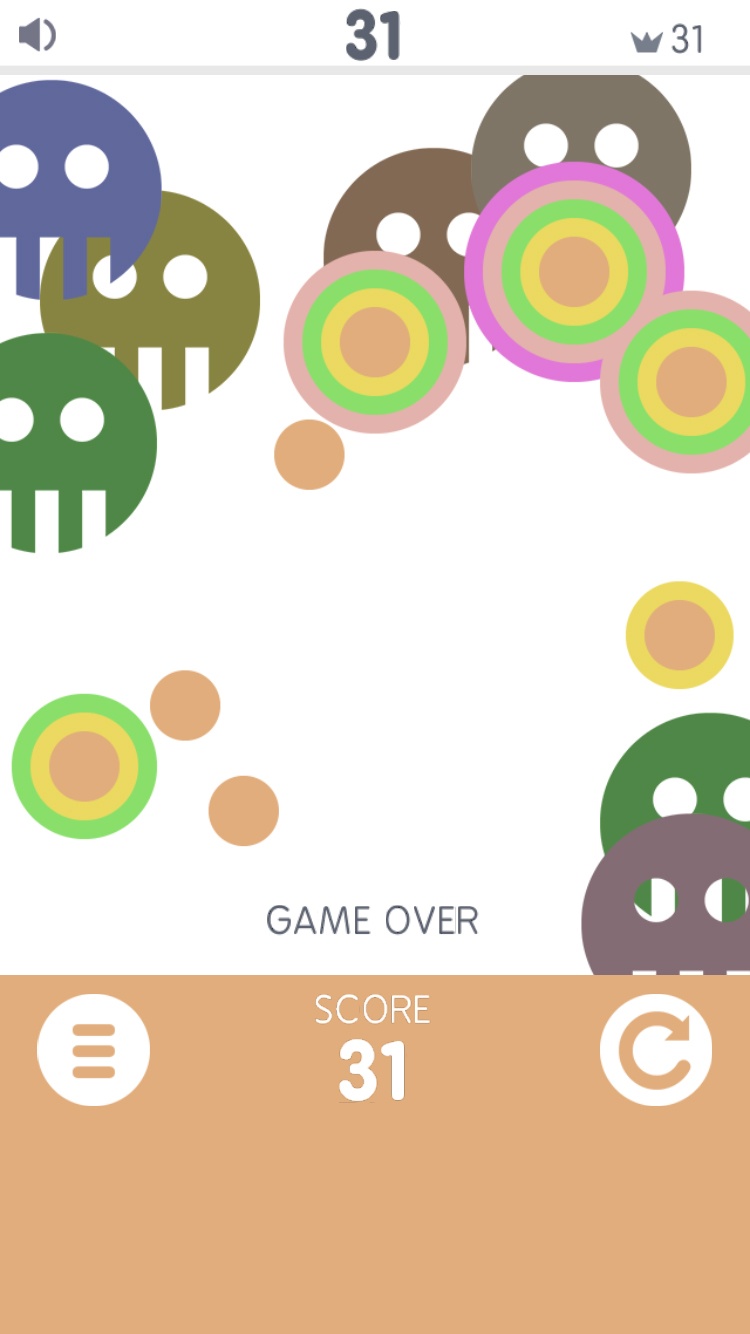 It’s here we find Hue Ball’s only drawback- the lack of levels or difficulty toggling will likely shorten the lifespan of interest in the game. Once you get it, you get it and there’s not much more to it. But in the meantime, the short sessions and one-handed portrait orientation will make Hue Ball perfect for commuting or queue-waiting while you’re learning to master it. And losing only makes the game more beautiful. Amazingly, the game is free-to-play with only one IAP to remove ads, so there’s no risk in trying it out.

Hue Ball lies somewhere at the nexus of billiards, air hockey, shuffleboard, pinball, Kandinsky, Damien Hirst, The Postal Service, and paint chips from the hardware store. It’s addictive without feeling icky and challenging while still being meditative. In short, it’s the perfect hue.