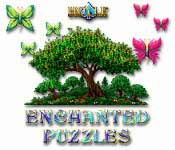 Let’s get something straight right off the bat: Gamezebo doesn’t give out high scores – such as 4 stars – just because a game offers a collection of puzzle types under one roof. In other words, more isn’t necessarily better. But in Hoyle Enchanted Puzzles, while the puzzle themes will be immediately familiar to casual games, the developer added enough of a new twist to most of these digital diversions to keep us glued to the PC for hours, forever trying to unlock additional stages.

As a young magic apprentice, you hear whispers of a great teacher and are determined to seek her out. Lo and behold, you stumble upon a secret map tucked away in one of your magic spell books, so you vow to track down the Wizard of Skye, in the hopes this master will help you become a powerful wizard yourself.

If you can forgive the Harry Potter-esque fantasy theme, Hoyle Enchanted Puzzles is essentially a collection of nine different games you need to unlock by “purchasing” access to the various buildings and bonus levels within it, with points you’ve earned in the game. You’ll also earn points in three areas (mind, nature and craft) to unlock additional goodies.

Game types range 3-in-a-row types and mahjongg to racing and fishing games. Here’s a look at a few:

A Zuma-like ball shooter called “Celestial Spheres” takes place in space, where colored balls snake out onto the screen and you must fire a colored ball so that at least at least 3-in-a-row of the same color touch, causing them to explode. This game, however, adds falling objects, such as stars (worth points if you collect them) and power-ups, which you can use to help finish the level, and a bonus shooting level.

“Gnome Mines” is almost like the opposite of Tetris: instead of trying to stop different-shaped puzzle pieces from reaching the top of the grid, you must fill up the entire space by selecting the desired shape from the bottom of the screen, rotating it, and plugging it into an underground mine shaft so that there are no spaces left. When completed, little gnomes pull it up to the surface. You must also click on spiders to turn them into butterflies and take on more challenging levels that introduce obstacles (like rocks, which cannot be filled in) and other challenges.

“Pyromancy” is similar to Missile Command in that you’re looking at a sky at night and must fire at colored lights before they leave the screen, but you can select these fireworks by simply placing your mouse over them all and when you have enough highlighted you click to detonate them, which helps you rack up points. This attractive game type gets difficult quickly as you can’t finish the level until you reach a specific point value.

“Pixie Blocks” is like the casual game Collapse!, where you need to click on as many same-colored blocks that are touching as you can to make them disappear (which requires strategy in setting up the big ones) but is tougher than Collapse! because you need to make matches of certain values – like 10, 20, 30 and 40 blocks – before the timer runs out, in order to finish the level. You only may achieve three of these goals, so you’ll need to replay all over again.

As you can tell, many of these games we’ve seen before, but Hoyle Enchanted Puzzles adds enough twists to these fun games to keep things fresh and increasingly challenging between the 200+ levels. At any time you can click on the main screen, which is that map of sorts, where you can click on a game type you like the best by spending your earned points to unlock additional levels. You might like the fishing game, “The Dark Lake,” better than “Alchemy,” a Bejeweled clone, as we did, or you may prefer “Fairy Races,” a butterfly racing game with power-ups and speed boosts, more than you do “Runejong,” if you don’t particularly like ancient Chinese tile-matching games.

Each of these nine game types also have fun bonus levels with slightly different rules.

Graphics aren’t amazing, but they’re colorful, cartoony and fun – plus the mystical music fits the fantasy theme. Characters, such as the Gnome King and Gypsy Mystic, add to the charm, too, plus gamers will perhaps learn about themselves, too, as they begin to answer multiple choice questions at points in the game, such as looking at a giant diamond-like structure sticking out of the ground and are asked if this is a tree, castle or ship.

We fell for the charming Hoyle Enchanted Puzzles, a game collection that proves you don’t necessarily have to reinvent the wheel, but if you add enough breadth and depth, and tweak the rules some, you can end up with a gratifying journey that is both accessible and addictive.

The Price is Right Review