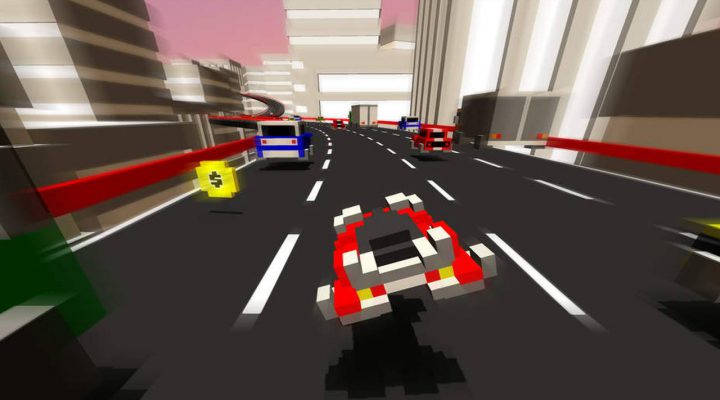 Can create hovercrafts, or customize existing ones.

Hovercrafts all feel exactly the same.

Having a bug crash into my truck’s windshield has never really been something I’ve thought twice about. Unless they’re particularly juicy, chances are I don’t even hear the bug hit my windshield – I just suddenly notice a bright-white smear commemorating the fatality move that my truck delivered to the insect. So, while playing Hovercraft, it was rather jarring to find myself in a reversed role.

Suddenly I was a bumblebee doing my best to avoid traffic. The whole experience was hectic and the unpredictable nature of the vehicles around me made navigating through them a real challenge.

Of course, I wasn’t just any bumblebee, I was a giant bumblebee built out of voxels. When I rear-ended a semi-truck, my cute little bumblebee face shattered into a dozen pieces as my momentum  sent the semi-truck flying into the cars ahead of it. As the front half of my bumblebee broke apart, I spun around and around as my thrusters desperately tried to keep the failing hovercraft afloat. Eventually I crashed into the back of a sedan, destroying the remnants of my bumblebee hovercraft, and sending the small vehicle careening into another lane. 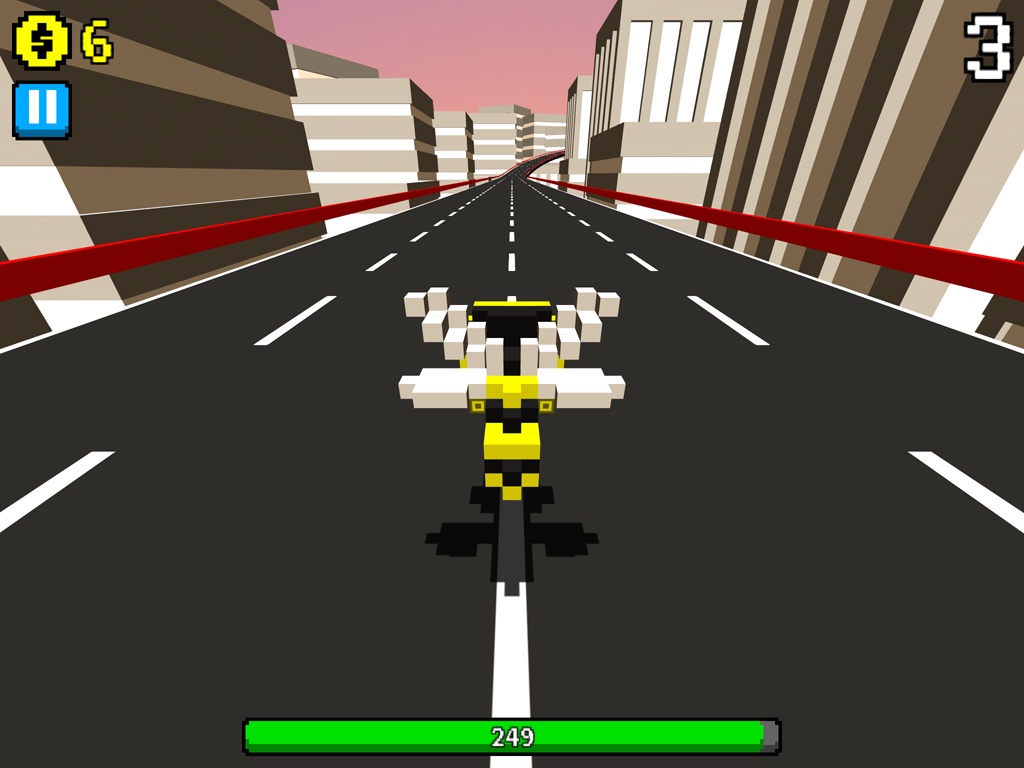 In the world of Hovercraft, if you can imagine it, you can build it, and you can fly it. So yes, that means I chose to fly a giant bumblebee-shaped vehicle.

Sure there were other vehicle options available to me, most of which took the form of traditional concepts of hovercrafts: sleek, sports car-like vehicles. But when I unlocked the bumblebee, well, there was just no going back.

Hovercraft is a neat little game from High Score Hero about navigating a hovercraft through lanes of traffic for as long as you can without wrecking. Players can use one of the many hovercrafts that come pre-built in the game, or they have the option to try their hand at creating a hovercraft from scratch. By placing blocks of varying color together, anything the player can think up, they can make…adhering to a some size restrictions, of course. 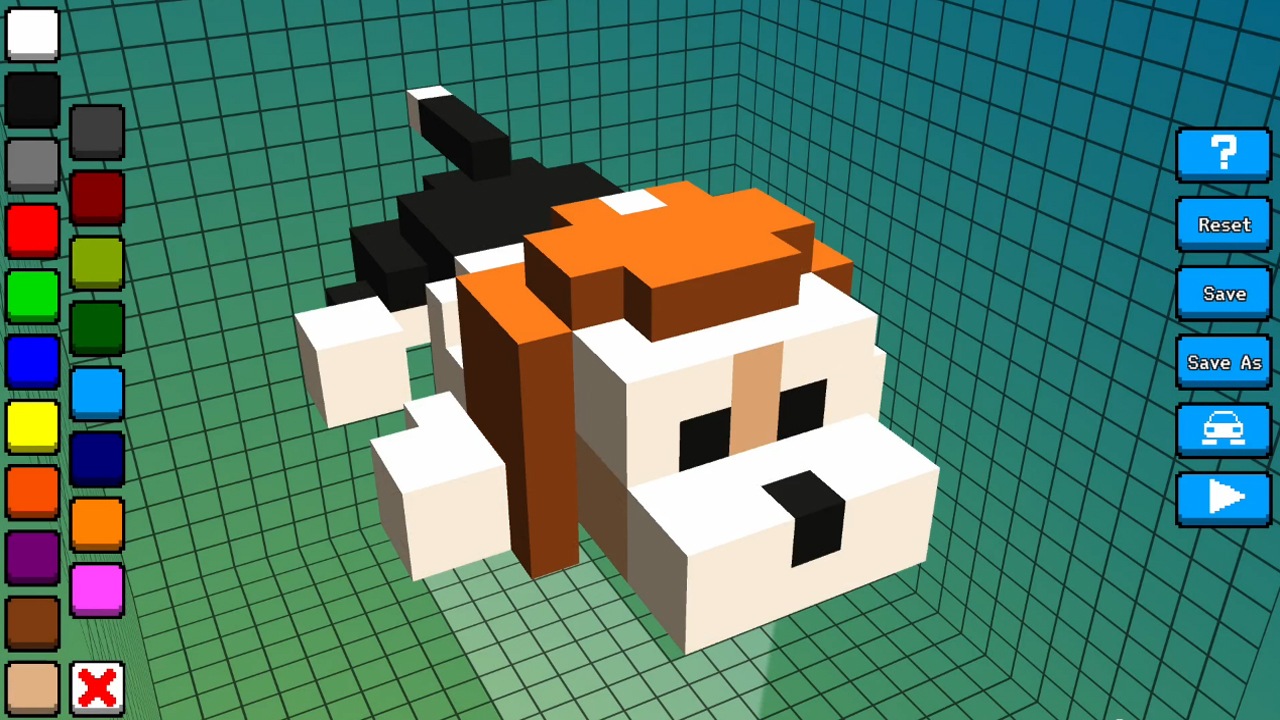 I tried to build a hovercraft and I ended up with a vehicle that looked more like a moldy potato than anything cool. The creative types will certainly get more mileage out of the customization options available to them than I did.

You don’t need a customized vehicle to get the most out of Hovercraft though. With a little bit of planning and a good deal of luck, I managed to get pretty far into some of my runs. Other times I crashed into the second group of cars I attempted to pass, simply because I underestimated the width of my vehicle. Luckily, restarting is as painless as just tapping the middle of the screen.

The gameplay itself is very straight forward, making it perfect to pick up and play a few rounds of during a brief period of downtime. The hovercrafts (with the exception of a few) look more unwieldy than fun to use, so I didn’t have the impulsive urge to collect them all – and while the destruction of your hovercraft is always neat to watch, it’s not nearly as satisfyingly hilarious as watching a cute little critter get taken out by a train. 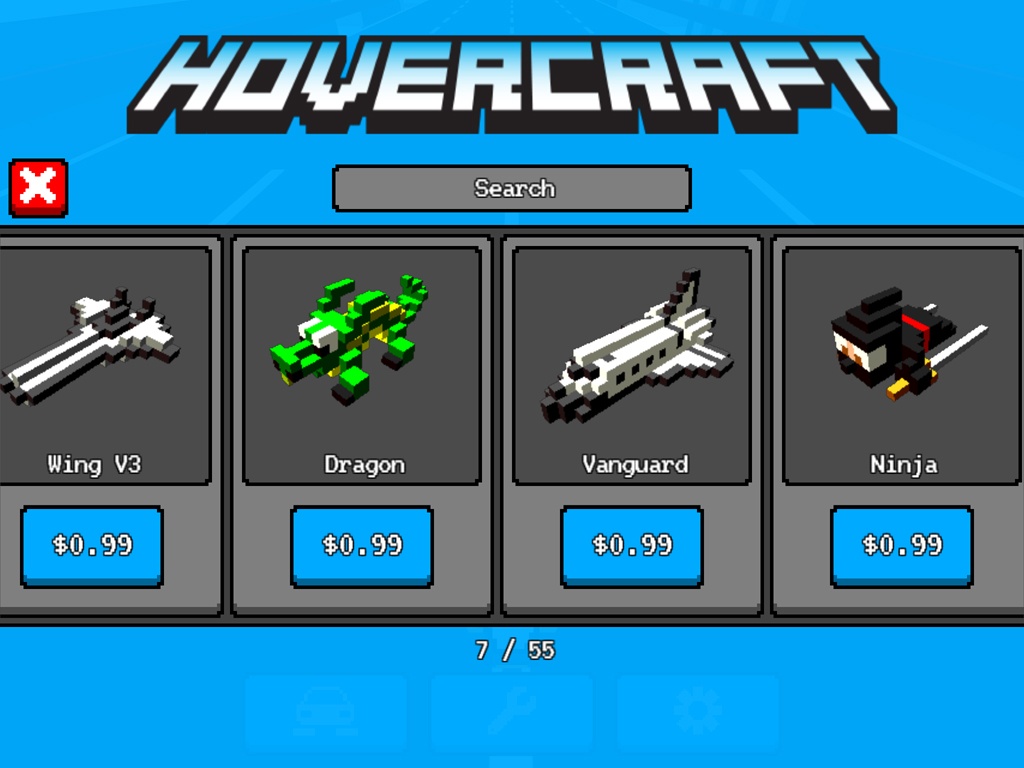 Much like Crossy Road, Hovercraft allows players to unlock a random new vehicle after collecting coins which can be gathered by watching advertisments, picked up through gameplay, and earned by simply logging into the game after a set period of time. Of course, real-world coins can be used to unlock a specific vehicle, if one so happens to catch the player’s eye.

The vehicle variety is fairly impressive…featuring everything from bumblebee-shaped hovercrafts to flying ninjas and space ships. Unfortunately, each of the half-dozen vehicles I’ve played with all handle exactly the same and don’t change the gameplay experience beyond having a different set of blocks to look at as you drive through traffic.

With that said, having a back-end view of the vehicles is a less-than-flattering angle. As cool as I know my hovercraft looks, I’m stuck looking at the back-end of it as I play, which isn’t really the best angle to admire its design.

Overall, I enjoyed my time with Hovercraft, but I don’t see it being a game I’m still playing even days from now. Maybe if the hovercrafts had unique abilities, the environments were more varied, or if I (personally) enjoyed customizing the hovercrafts, I’d keep on playing, but as it stands now, it was a good game to spend a few hours that eventually left me desiring a bit more.