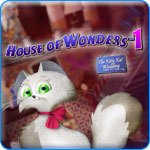 If ever a case could be made for a game being so bad it’s good, it’s House of Wonders: Kitty Kat Wedding. It’s an absurd and kooky premise accompanied by a patchwork of gaudy hidden object challenges and mini-games with eye-bleeding graphics, yet there’s something strangely endearing about it all the same.

Larry’s sorry-looking tomcat, Mr. Bones, is in love with the neighbor’s cat Ms. Felicity and they want to get married. The problem, as Larry explains, is that they don’t have any money – because they’re cats. (Hmm… so it’s strange that cats should have money, but not strange that they’re getting married…)

You can pay for the cats’ wedding by earning money in Larry’s House of Wonders, a collection of 18 rooms that appear to be part of some sort of carnival sideshow attraction. Gameplay works as follows: there are 20 categories of typical wedding expenses to cover, including venue, transportation, invitations, photography, and of course, food.  For each of the categories you’ll get to play a handful of rooms in the House of Wonders to earn as much money as possible, then spend the money in the Wedding Mart.

The more money you have, the better quality wedding you can afford. For example, in the venue category a low budget gets you the rustic Elk’s Lodge or Larry’s backyard, while if you earned more money you can splurge on the luxurious Elysian Vinyards, or even the Sistine Chapel itself – the height of decadence. All of the categories run the gamut from absurdly cheap to ridiculously over the top expensive. Transporation is another funny example: You can splurge and have the couple arrive in a private Gulfstream jet, or cheap out on a donkey with two saddles. (How romantic…)

Most of House of Wonders‘ 18 rooms contain Where’s Waldo-style seek-and-find challenges, where you’re given a list of objects like "banana," "broom" and "phone" and have to find them in the scene. There are several variations on the theme, including Dark Room, a pitch black scene revealed partially by flashlight; Twins Room, a spot-the-difference challenge; Negative Room where the objects are colorless like film camera negatives or X-Rays; and the Upside Down room where the entire scene, objects included, has been turned upside down.

The problem? Outrageously tacky graphics and audio. In small doses, some aspects of the game’s dubious production values could be laughed off as kitschy fun like a real carnival. The Guests in Space room – a scene that depicts a cluster of animals wearing space helmets orbiting the moon – is deliciously out of left field, each correct item clicked on launches an in-your-face whirring noise, and the hints system works by flipping a switch to make a long wooden arm reach into the scene and point to the item.

However, with so much craziness piled on it simply amounts to sensory overload. Items are grafted into scenes randomly with no thought devoted to their placement, resulting in too much ugly clutter. Peoples’ faces are distorted into hideous caricatures, and even the Wedding Room – which is supposed to be your big reward for seeing all of the things you bought come together – looks like something a child would create by cutting and pasting pictures out of magazines

The cacophonous and sloppily looped music is no better. The Bathroom’s music was so bad, in fact, that it drove me to do something I’ve never done in a game before: mute the audio.

House of Wonders: Kitty Kat Wedding‘s multitude of annoyances and thrown-together quality make it hard to recommend. There is a kind of bizarre charm and humor to the game in the same way that cheesy low budget B-movies can be fun to watch, but it’s not worth paying full price for the privilege.