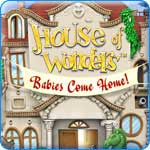 House of Wonders: Kitty Kat Wedding, where you had to help an annoying little man named Larry raise money to pay for his cat’s nuptuals, was perhaps the tackiest and most absurd hidden object game yet created.  And less than two months later, there’s already a sequel.

To be fair, though, House of Wonders: Babies Come Home is a better game that retains the quirky off-beat charm of the first but offers much-improved production values.

If you downloaded House of Wonders: Kitty Kat Wedding then you’ll already be familiar with Larry, the owner of the House of Wonders theme park. He’s once again bugging you for money, but this time it’s because his wife, Lucretia, is about to deliver quintuplets and he hasn’t bought any supplies yet for the delivery or nursery!

The way you’ll earn money is by completing challenges in Larry’s House of Wonders, which consists of 15 rooms of hidden object challenges, and five puzzle rooms. Each hidden object room is a different theme. Some will be familiar from Kitty Kat Wedding, like the Negative Room where objects appear like film negatives, and the Upside Down room where the entire scene is… well, upside down.

There are also things like the River Room, where items float by what appears to be a water-filled Roman aqueduct; Bubble Machine, a laundry room where bubbles float around obscuring items until you swat them away with your mouse; and the Sleeping Room, which inexplicably contains the gigantic and rather ugly head of a sleeping, snoring person in the background.

Like the first game, the quirkiness of some of these rooms is funny and refreshing, while others still take things a little too far. Some of the rooms, like the Bottomless Pit where items are falling and rotating on a red brick wall background, and the Bathroom which is warped into a fish-eye lense view, are still quite hard on the eyes. Also, the method of revealing hints is just a small white hand that blinks for a few seconds so it’s possible to miss it.

To the game’s credit, though, the graphics have noticeably improved. Instead of looking like mish-mashes of random cut-outs, the objects are more cartoonish, which gives the game a more unified-looking art style. Audio, which was another sore spot in Kitty Kat Wedding, is also more tasteful.

There are 14 rounds, and at the end of each you’ll get to spend the cash you’ve earned on new items for the delivery and nursery, like an overnight bag, transportation, blankies and cribs.

The shopping portion of the game is still great fun thanks to the fact that there are a variety of humorous items to choose from. The more money you have, the better quality item you can buy. For example, if you’re feeling cheap you can buy the babies five cardboard boxes with shredded newspaper to sleep in, or if you’re feeling generous you can get them the top of the line "Contempo-Plush brushed aluminum auto-temp" cribs.

Through the course of the game you’ll get to see the nursery and delivery room fill up with the items you’ve purchased, and these rooms look a lot nicer than the Wedding Room did in the first game, thankfully.

Although, given how much Larry can grate on the nerves with his constant stream of whiny, ungrateful comments (like "Well it’s something, but you’ve still got to find more things!) it’s very tempting to intentionally buy the aluminum foil blankies, pillowcases with eyeholes sleeper set, and whatever else is the cheapest, and spend the bulk of the money on a mansion for yourself instead.

While House of Wonders: Babies Come Home is definitely a try-before-you-buy, its production values have improved greatly over its predecessor enough to charm some hidden object fans willing to tolerate the game’s other quirks. This allows more of the irreverence and creativity to shine through instead of getting bogged down in a slipshod presentation, which is what happened with Kitty Kat Wedding.